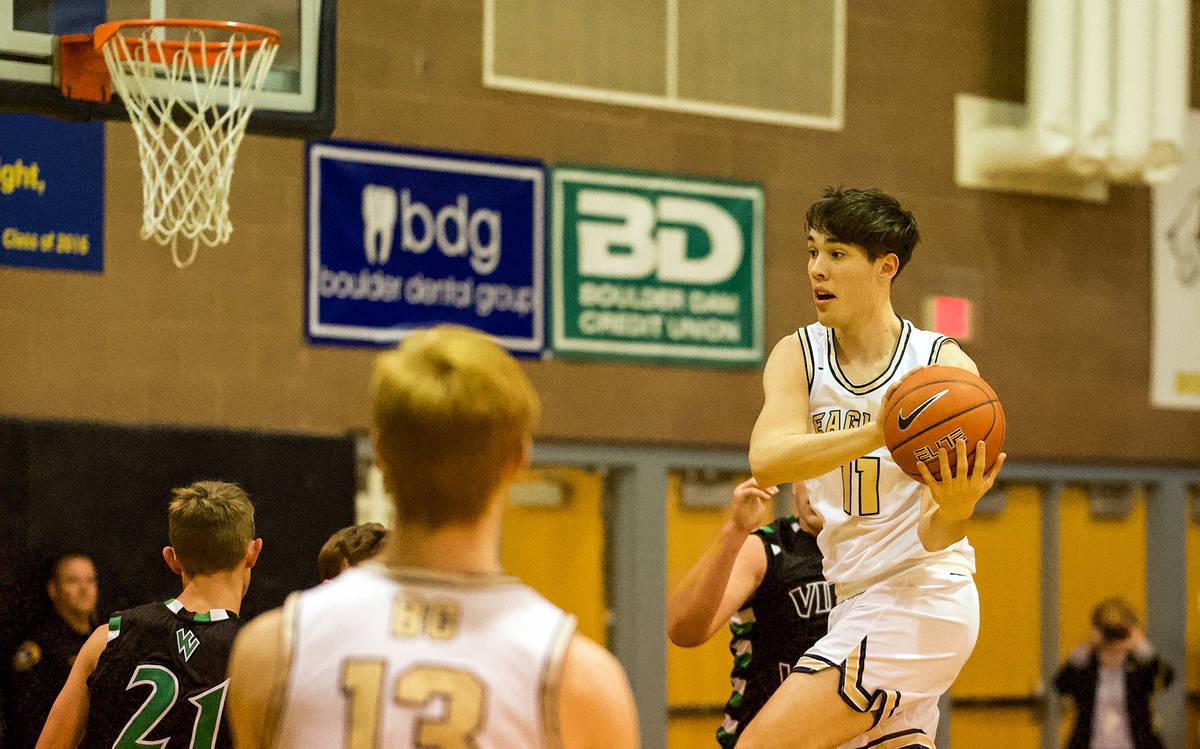 Boulder City High School senior Ethan Speaker, seen playing in last season's final game in February, was upset by the cancellation of winter sports but is using the time to hone his skills.

Following the cancellation of last year’s spring season, basketball, bowling, flag football and wrestling, which were all scheduled to play a shortened season from Jan. 15 to Feb. 20 because of the pandemic, are the latest victims.

“The district will not participate in any season one winter sports … for the 2020-21 school year,” a CCSD statement said. “As a reminder, all schools are to remain closed for athletic purposes.”

In a distance learning mode for the majority of CCSD high schools since the pandemic took its toll in March, the current time table for returning to the classroom or participating in a hybrid model won’t occur until January at the earliest.

The Nevada Interscholastic Athletic Association has stated in the past that school would need to be back in session in at least a hybrid model for high school athletics to be played.

“We knew this could be a possibility and unfortunately it came to fruition,” said boys basketball coach John Balistere. “I think it would of been very hard to justify playing high school sports when kids still aren’t in the classroom. I really feel for these kids as a coach, especially our seniors. My heart goes out to the guys.”

The latest blow to what has been a torturous period for high school athletics, the recent announcement has not only left coaches and players shocked, but deeply saddened.

“It’s really sad,” wrestling coach Jim Cox said. “This really makes you think about how quickly things come and go in life and how we should be thankful for everything we do have. I think this is an example. We always say, well there’s next year, but there may not always be a next year.”

Preparing for his final season, senior Boulder City High School basketball star Ethan Speaker was seeking the Eagles’ first state championship since 2009 after making the semifinals as a junior.

A recent Division I commit to the University of Arkansas at Little Rock, Speaker was named the Class 3A player of the year last season and positioned the Eagles to be among the top title contenders this season. With the recent news, Speaker will continue to work out on his own before departing for college.

“What’s going on right now is really unfortunate and I’m upset that the season is canceled,” he said. “I wish there was a way to play my senior year but I’m trying to look at things as positive as I can, like being able to work on my personal game for a whole year.”

Leaving a glimmer of hope for 2021, there are currently no plans to change the status of the shortened fall or spring sports seasons.

While COVID-19 outbreaks this winter could inevitably change the outlook for 2021, fall sports are slated for games from March 5 to April 10, with the spring season playing from April 16 to May 22.