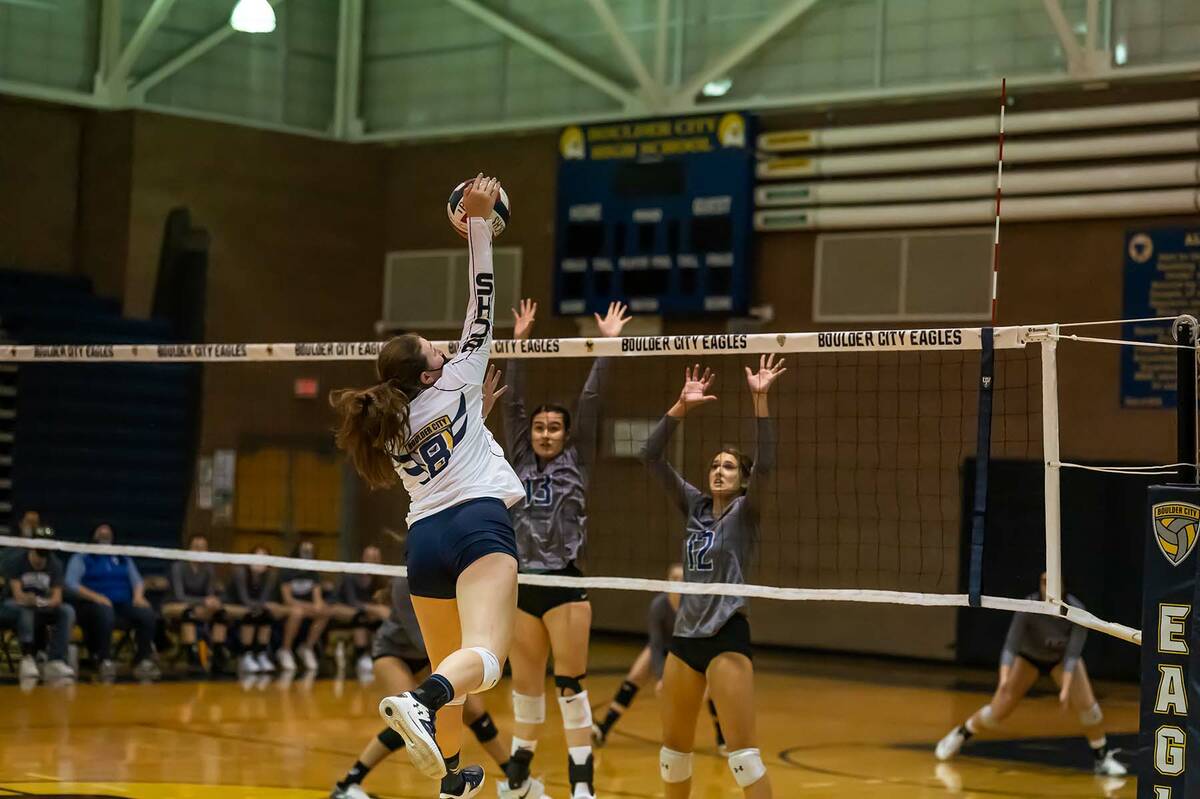 Julianna Luebke, seen in action Sept. 9 against Basic, was one of four members of Boulder City High School's girls volleyball team named to the All-Southern Nevada team, representing the top high school players regardless of classification.

“Having four of our girls honored on this team is a really big deal,” said girls head coach Chad Robinson. “It’s really cool when they get compared to all the top players in the state. It shows their hard work paid off.”

Named player of the year in the 3A Mountain League, Luebke was one of three 3A players to make the 12-player second team, an honor usually reserved for 5A and 4A players.

“Early in the season we decided to have her play six rotations and she had never really played back row before,” Chad Robinson said. “She did a really good job stepping up and she shined when given the opportunity.”

Earning an All-Southern Nevada honorable mention selection, Zoey Robinson was a first team selection for 3A All-State, region and All-League, finishing up her senior season with 513 digs and 96 serving aces.

“Zoey was our only returner with varsity experience so we put a lot on her this season,” Chad Robinson said. “She gave the girls a lot of pep talks toward the end of the season and was a great leader for us.”

Doane, who was a second team 3A All-State selection and first-team selection for the region and league, finished her sophomore season with 262 kills, 89 digs, 42 serving aces and 19 blocks.

Bryant, who hadn’t played high school volleyball since her freshman year, was a second-team 3A All-Region selection and first-team All-League selection. Taking on the role of setter, the senior ended her prep career with 783 assists, 94 digs and 65 serving aces.

Rounding out the postseason accolades for the Lady Eagles were second team All-League honors for sophomore Jordyn Woodard and freshman Sydnee Freeman. Woodard finished the season with 164 digs and 81 serving aces, while Freeman generated 170 kills, with 87 digs and 69 serving aces.

“The future of our program is very bright,” Chad Robison said. “I believe we could have had even more girls highlighted if given the opportunity, but these are the three girls that were able to play a lot and they got rewarded. We’re excited about our future.”