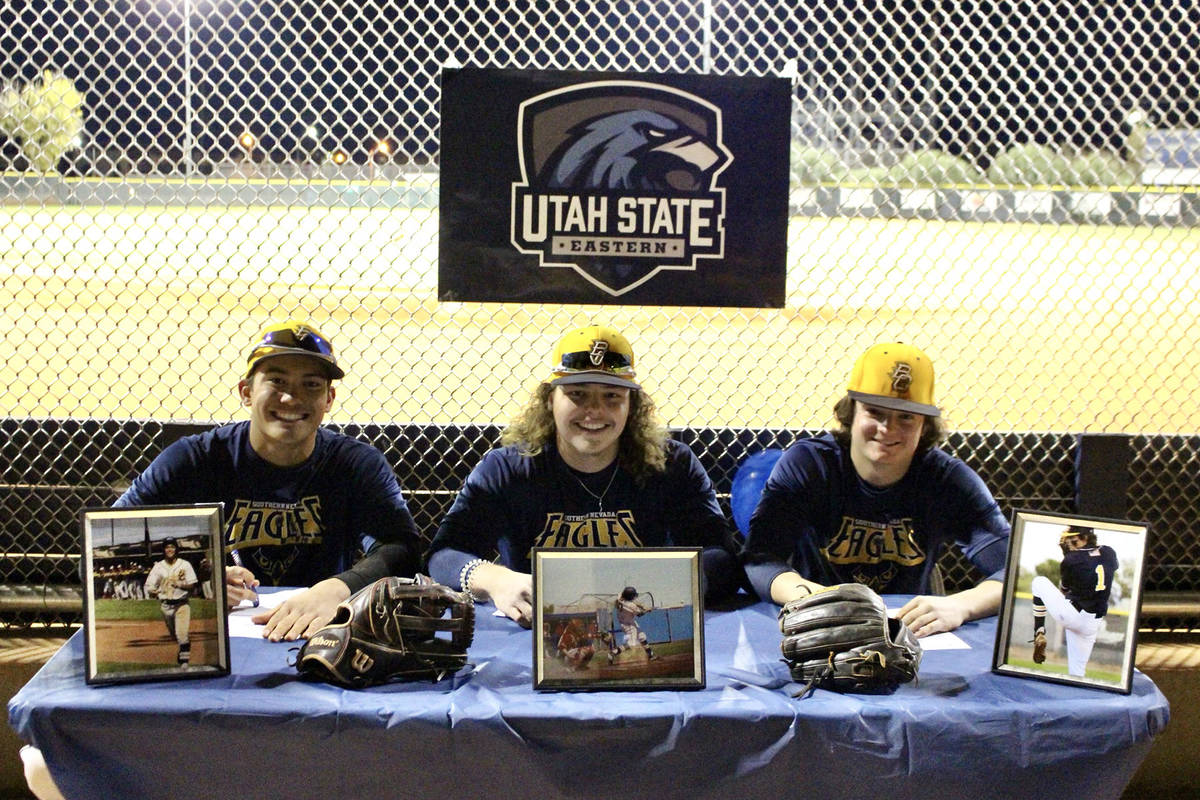 “I am extremely excited and grateful to have the opportunity to go play at Utah State Eastern,” Lopez said. “It’s been a dream of mine since I started playing baseball to go play college ball, so this whole thing is amazing.”

Despite being in the midst of a global pandemic and having their junior seasons cut short, a major blow to their individual recruiting process, the trio has put together an extensive body of work on the field making them attractive collegiate prospects.

All three-year varsity contributors, the trio led the Eagles to a pair of 3A state tournament appearances as freshmen and sophomores, hoping for one last chance to capture a championship before they depart to Price.

A big signing for a program that went 4-33 in its last full season in 2019, Utah State University Eastern is getting the former 2019 3A player of the year in Trumble, who is known for his dynamic bat, as well as steady approach on the mound.

Feeling like he can relate to the coaching staff at Utah State Eastern, Trumble said he is excited about the opportunity and called it the right fit.

“I’m very excited to commit to Utah State Eastern and can’t wait to get up there and grind with the team,” Trumble said. “I feel like Utah State Eastern was the right fit for me because it’s going to give me an opportunity to be seen as well as grow as a person and a player. The coaching staff is young, which makes me feel like they can relate to the players more, making it easier to get things done.”

A consistent two-way player, Connell was one of the more underrated talents in town, regardless of classification but should make a big impact for the program at the collegiate level.

Overlooked by major colleges despite his success on the mound, Connell said he is excited about the prospects of playing at the college level and attracting more scouts over the next two seasons.

“I look forward to playing … ,” Connell said. “These next two years will allow me to develop my skills. With a lot of hard work, I hope to be able continue my baseball career once I am done playing here.”

Rounding out the trio of Eagles heading up to Price, Lopez will give the program a consistent bat in the lineup and speed on the base paths.

Having already visited the campus, Lopez said he felt at home during the process.

“The school felt like the right fit because of where it’s located and the people around,” Lopez said. “I love Utah and to get to go to school there is amazing. When we toured the campus everyone was super nice and very helpful.”

Playing in the Scenic West Athletic Conference, another perk for the trio will be the opportunity to come home each year for a series with the College of Southern Nevada. Getting the opportunity to play in front of their home fans on the road, Connell said he is excited about what the future holds.

“Coming back home to play will be a fun experience,” he said. “I drive by their field often and to think I will be playing against them is an exciting thought. Being home will allow family friends an easy way to watch us play. Although it may be an away game, it’ll be nice to have familiar faces in the crowd.”