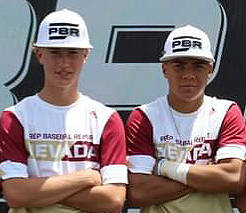 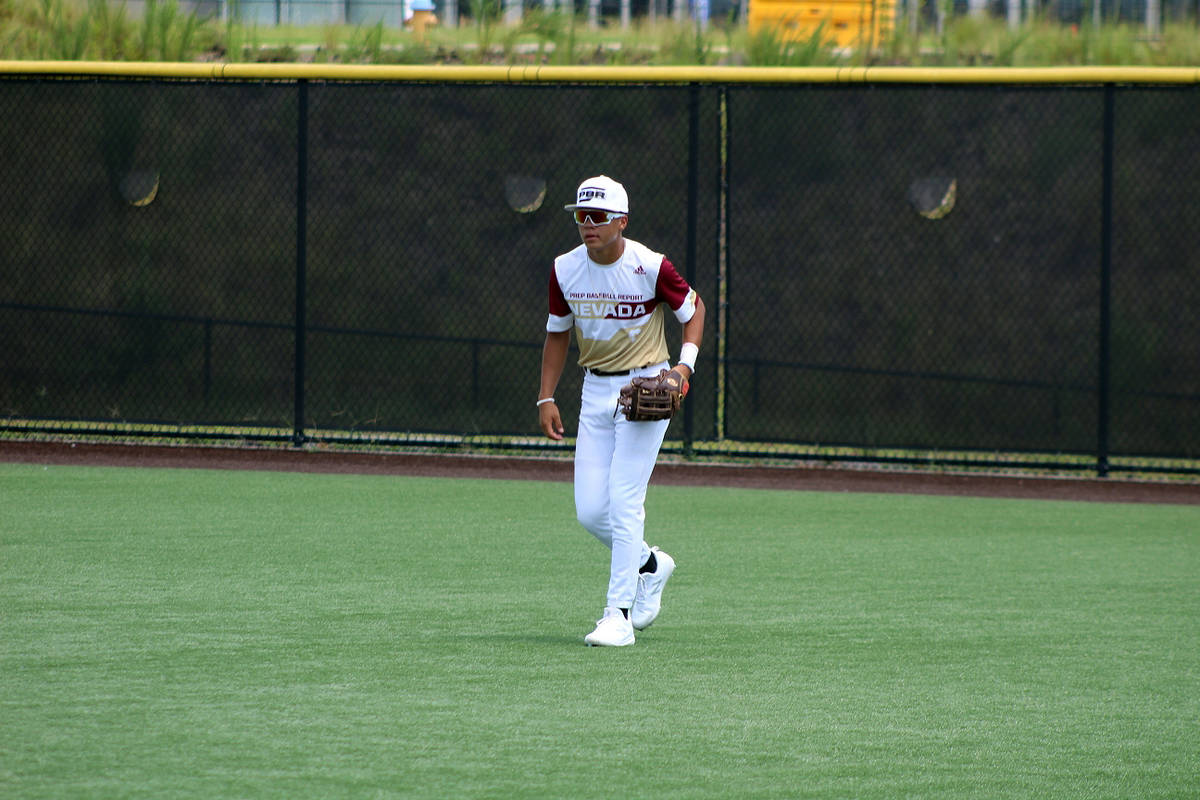 (Lori Giunta) Boulder City High School sophomore Jet Gilliam is seen in the outfield during the Prep Baseball Report Future Games, held in Atlanta, Georgia, in August 2020. The games allowed top baseball players in the state to be seen by college recruiters. 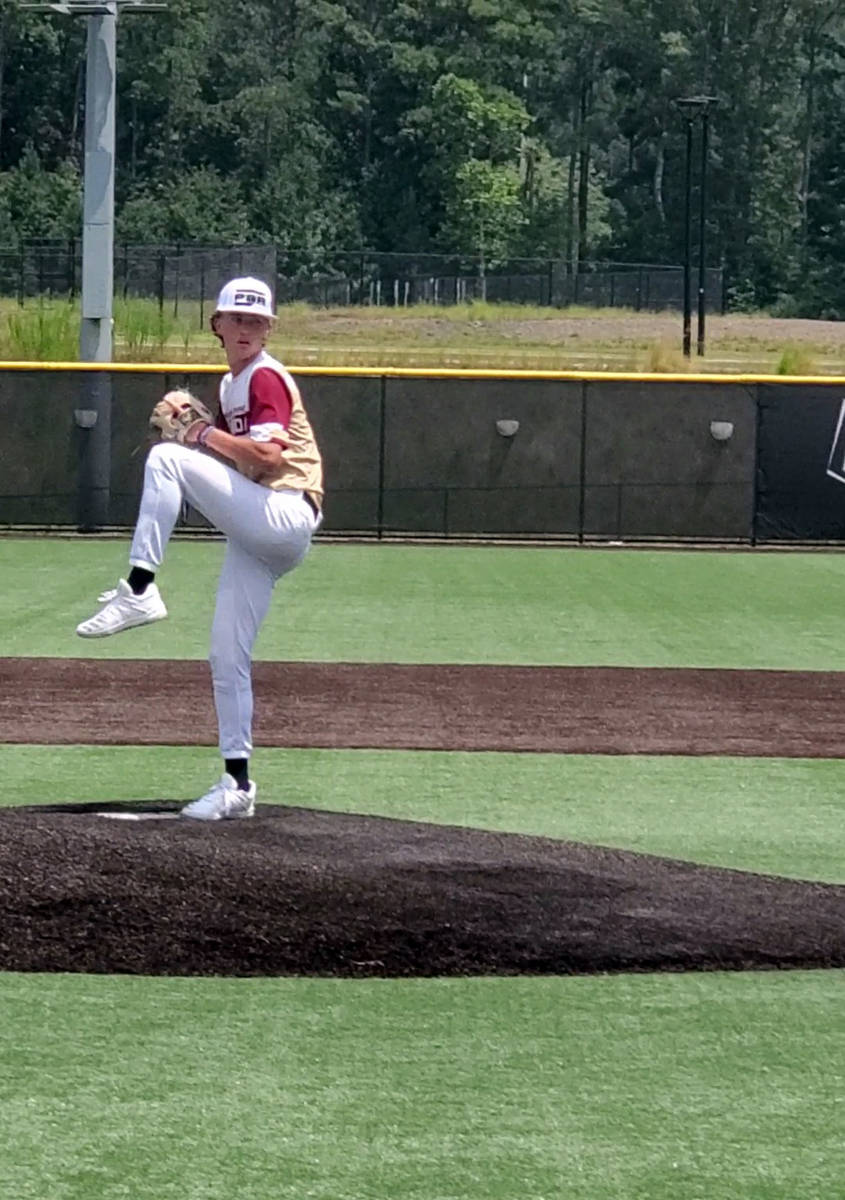 Jet Gilliam and Seth Graham-Pippen, sophomores at Boulder City High School and future stars of its baseball program, have carved out their own their futures playing this summer with Nevada’s Prep Baseball Report travel team.

A baseball organization focused on getting athletes exposure on the collegiate level, Gilliam and Graham-Pippen traveled to Atlanta, Georgia, in August for the Prep Baseball Report Future Games with a team comprised of the top class of 2022 and 2023 prep baseball players in the state where they were seen by 250 collegiate programs from across the country.

“The trip to Atlanta was worth it for sure,” said Brett Harrison, director of PBR Nevada. “It was really cool for the select few players from Nevada who were able to make the trip to represent our state. It was great for our players to see who the other top players in the West Coast are and who their competition is for scholarships outside of the state. A lot of collegiate programs like to keep it fairly close to home when it comes to recruiting, so it gave our guys a chance to see where they stack up at against other elite players.”

“I think it’s very beneficial for these guys to be around other elite athletes not only in our state but from these opposing states,” Harrison said. “It allows them to see where they’re at as a ball players and help push them to get better, knowing who their competing against for scouts.”

Gilliam said he enjoyed the experience and was thrilled not only for the atmosphere but competition that came with playing in the Future Games.

“It’s always fun to travel to play the best of the best,” he said. “Georgia was hot and humid, but we got to play in the rain, which is different for us. You always wonder as a player if you are able to play with the best players in the country and what you need to work on to be a better player. Since we play a lot of tournaments in the West, we see a lot of competition, but this was a cool way to see players from all over the country.”

Two of the top sophomores in the state of Nevada, Harrison said he thinks Gilliam and Graham-Pippen have bright futures ahead of them.

“Jet is an extremely athletic player,” Harrison said. “He’s a fantastic base runner, he gets after it in the outfield and his bats is there as well. His game really shines a lot in every aspect and he’s a player who’s only going to continue to get better as he gets bigger and stronger.

“Seth is going to be a really good pitcher. He’s already up to 84 mph on his fastball or at least he was as a freshman and now heading into his sophomore year. He’s another player whose game is going to be parallel with his physical development. His velocity is going to get stronger, he’s gonna run faster, hit the ball harder, all that stuff as he continues to grow into his body. Seth definitely has the makeup and the intangibles to become a legit prospect as he continues to mature.”

As both players continue to progress physically and on the baseball diamond, Prep Baseball Report is working diligently to make sure their progress doesn’t go unnoticed.

“Helping get our players to the next level is what we’re all about,” Harrison said. “The reason I love doing what I do is because we’re able to put these players on a platform that allows them to be seen by anyone. A lot of recruiting now goes through social media and Prep Baseball Report allows coaches to pull up their profile on our website and see all the different metrics a player has registered at a previous event, along with video and write-ups on every player. There’s so much information that Prep Baseball Report provides that it really helps take out the opinion aspect of recruiting and allows coaches to get accurate information on who these players really are and why they should recruit them.”

Graham-Pippen’s profile shows him as a potential Division I pitcher. Using data from three Prep Baseball Report summer events it reveals he has an 84 mph fastball, 67-69 mph curveball, 70-72 mph change-up and 69-70 mph slider.

“Prep Baseball Report uses the latest technology so I can see where I stand as a player,” Graham-Pippen said. “I did three PBR events this summer and it was great to play with some of the top high school players from Nevada.”

For Gilliam, who plays in the outfield, Prep Baseball Report tracked how he projects as a hitter, monitoring his bat speed (73.2 mph) and hand speed (22.7 mph), along with other metrics like average exit velocity of his swings (83.6 mph) and distance (223 feet).

“PBR Nevada does a really good job of showcasing its local talent,” Gilliam said. “It allows players to get better by measuring their skill level versus other players. It was an awesome experience playing with PBR this summer.”