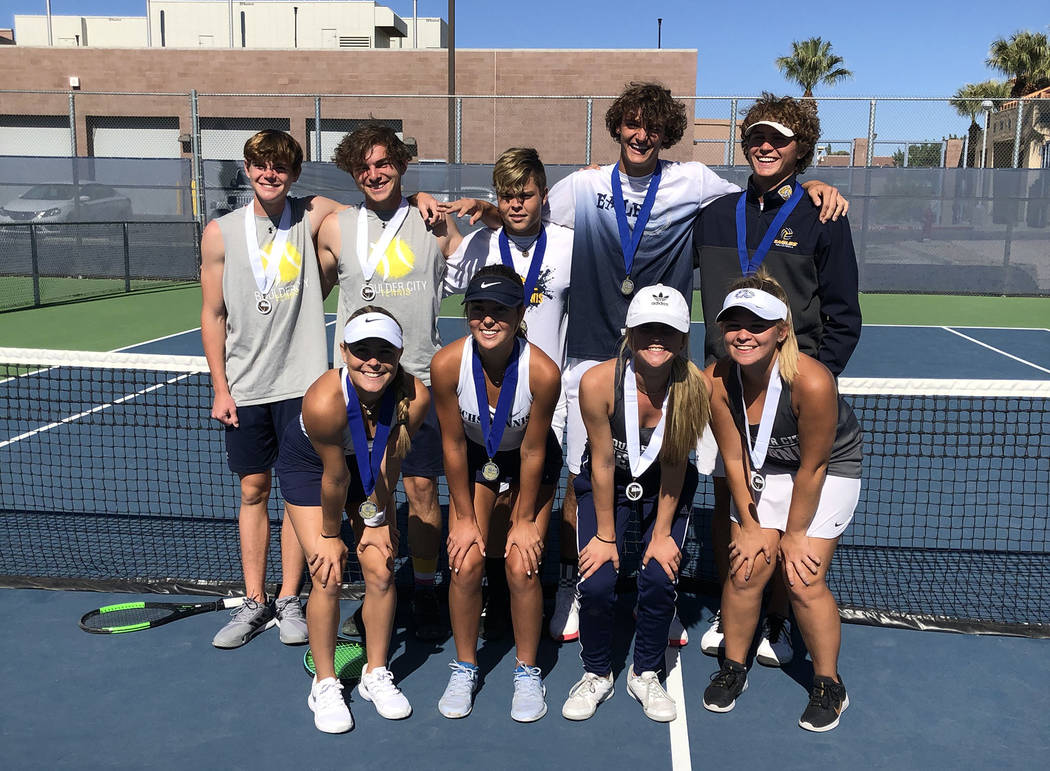 For the boys, the senior doubles tandems of Boen Huxford and Preston Jorgensen and Ty Pendleton and Braden Soileau will be going to the state tournament as well as senior singles player Connor Mikkelson.

“I’m very proud of all of their efforts,” boys head coach Rachelle Huxford said. “They’re all seniors and they’ve worked extremely hard. It’s a great accomplishment for these players to go to state.”

For the Lady Eagles, the doubles tandems of seniors Olivia Mikkelson and Tegan Pappas and senior Katelyn Fox and Sophomore Reggi Gibbs will be joining them.

“I was ecstatic for the program to get that kind of recognition,” girls head coach Jami Pappas said. “They are the most wonderful group of young ladies you could ever coach. They put their heart and soul into tennis every single day. We are reaping the benefits of this.”

Looking to defend their doubles state championship, Boen Huxford and Jorgensen enter the tournament as the favorite to repeat, after claiming the regional title.

Cruising through regionals, the duo handily defeated The Meadows duo of Andrew Little and Clarence Ndubisi 6-0, 6-3 in the finals.

“When Preston and Boen are at their best, there are very few teams that can beat them,” Rachelle Huxford said.”They’ve been playing together for four years now and they have such great chemistry. At times, they know where the other is going to be, before it even happens. I expect them to do very well in the state. They’re going to be tough to beat.”

“Connor’s playing with a lot of confidence right now,” Rachelle Huxford said. “He played great against Rua in the finals and I really think this could be his year.”

Both Boen Huxford and Jorgensen and Connor Mikkelson have also earned first round byes at the state tournament.

Finishing in third place at regionals was the tandem of Pendleton and Soileau who will play South Tahoe’s Andrew Lehmann and Aiden Walker on Friday, Nov. 1.

Entering as the favorite, the duo defeated The Meadows Ashley Hofflander and Peyton Barsel 6-1, 6-3.

“I’m so happy with how things went at regionals,” Tegan Pappas said. “Olivia and I worked really hard together and we are so excited about our outcome. Olivia is such a great partner and we are looking forward to state.”

Finishing third for the Lady Eagles was Fox and Gibbs who will play Incline’s Summer Ferrell and Katherine Tong on Friday, Nov.1, while Olivia Mikkelson and Tegan Pappas clinched a first round bye.

“I was excited to see Reggie and Katelyn play to their highest ability,” Jami Pappas said. “I knew if they would, that they would take third place and they did.”

Prepared for a busy week ahead, both tennis programs will play Northern challenger Truckee today, Oct. 31, in team play in the state semifinals, before starting individual play on Friday, Nov. 1.