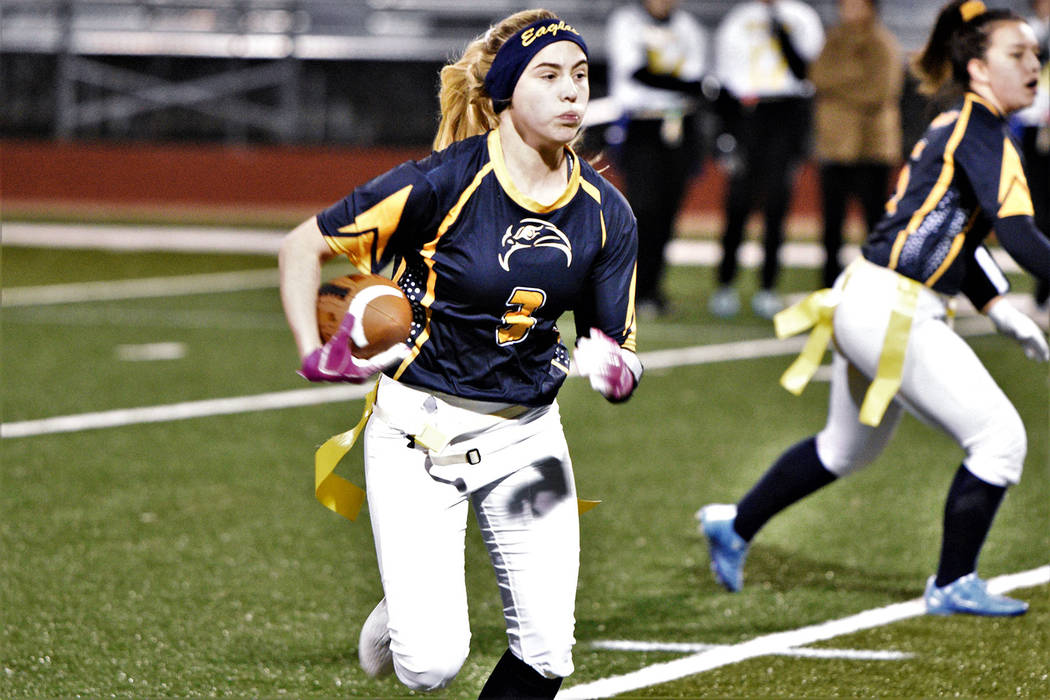 Boulder City High School’s flag football team finds itself at a crossroad after splitting a pair of recent games.

In the middle of the pack in the 3A classification, the Lady Eagles defeated Sunrise Mountain 21-0 on Jan. 30, before dropping their second contest of the season to rival Moapa Valley 6-0 on Monday, Feb. 3.

In the Lady Eagles’ three losses this season, 8 points is the margin, leaving them good enough to compete with anyone in the classification but still needing more to come out on top.

It was an offensive struggle for the Lady Eagles, mustering up only 136 yards of total offense against the Pirates as they played in windy conditions.

“The weather was pretty crazy and both teams had a hard time throwing the ball,” head coach Kevin Ruth said. “Moapa scored on the first drive of the game and then it was a defensive struggle after that. We are right in the mix; we just need to clean some things up before the playoffs start. Our girls are working hard and know all three of our losses could have gone either way.”

Coming on strong in the second half of the season, senior quarterback Makaela Perkins was neutralized by the wind, completing only two of her 13 pass attempts for 12 yards and an interception.

The game prior against Sunrise Mountain, the signal caller completed 11 of 21 passes for 73 yards and two scores. Running the ball with authority but unable to get in the end zone was senior Emily Rinella, who rushed for 96 yards on 17 carries, breaking away on one play for a gain of 25 yards.

In the easy win against Sunrise Mountain, Rinella rushed for 64 yards and a touchdown, while also catching two passes for 30 yards and a score.

On defense, Arboreen made eight tackles and junior Jaden Lewis made seven tackles.

“The Sunrise game went pretty well defensively,” Ruth said. “We only gave up one first down all game and had a few more chances to score in the red zone.”

Having already lost once to Virgin Valley, adjustments will need to be made but the Lady Eagles remain confident.

“Any adjustments that our team needs our coaches are already seven steps ahead of the game,” Perkins said. “They are always thinking of new ways to trump our next team, and we are always ready for those adjustments as needed. That’s what keeps us up in the league — our ability to change and adjust.”