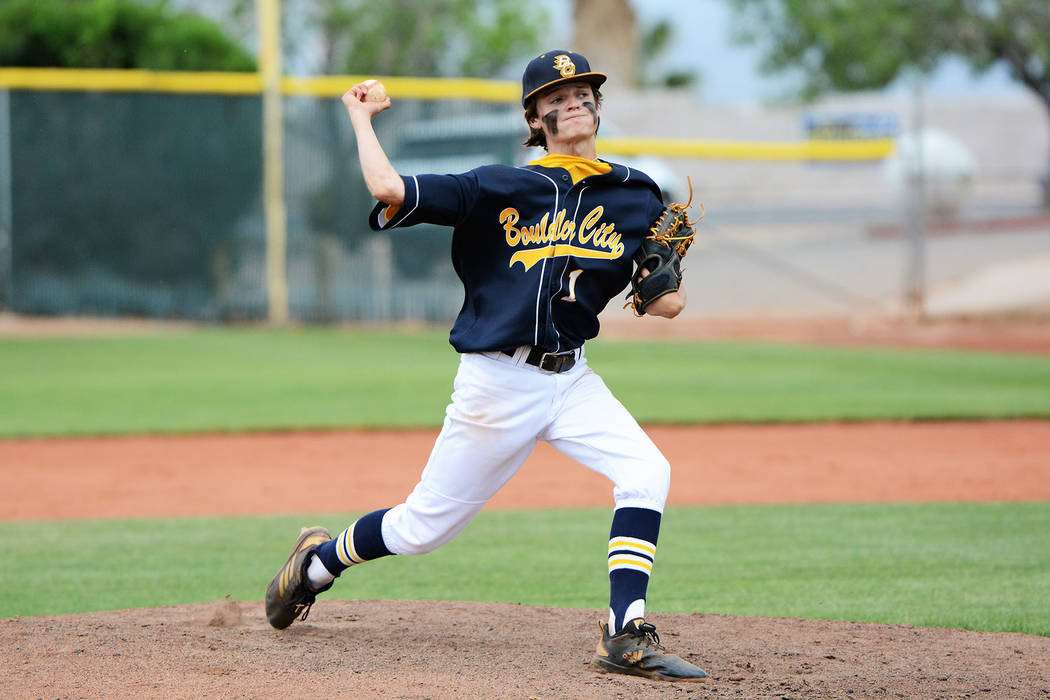 Troy Connell, seen pitching for the Boulder City High School Eagles in May, struck out seven batters May 29, 2019, in the Southern Nevada Eagles' 2-1 victory over Las Vegas in the Nevada Connie Mack League.

“I consider myself very lucky,” Lee said. “I’ve inherited a lot of talent that has been well coached at the high school level and already knows how to produce on the field. The coaching staff at Boulder City High School has done a great job with these players, and now it’s my job to try and help further develop them. I expect us to have a great summer and win a lot of ball games.”

With a roster made up of mostly juniors, the Southern Nevada Eagles have some added experience this summer with recent high school graduates Brendan Thorpe and Brian Miller and 2018 graduate Chafton Temple playing in the 18U league.

“We’re very fortunate to have those three playing for us this summer,” Lee said. “Thorpe and Miller are two guys that just had a lot of success during the high school season, and bringing Chafton back for the summer was a no-brainer for us. They’ll all not only add skills and depth but leadership for our ballclub.”

Deep at all positions, the Southern Nevada Eagles are one of the favorites to compete for the Connie Mack championship after finishing the high school season with a 3A state tournament appearance and a 27-10 record.

Already 4-1 after the first week of summer play, Lee expects the Eagles’ success to carry over from the high school season effortlessly.

“We have a lot of talent on this team,” Lee said. “Again that goes back to the high school staff coaching these kids up and getting the best out of them. There was a little bit of rust to shake off after the boys were on summer break for a little, but I know they’re excited to get back on the field and win ball games. We have a lot of high-energy kids who love to compete and love the game of baseball.”

Joey Giunta will also be relied upon heavily this season to provide quality innings.

“We have a lot of talented arms who can eat up innings and be effective for us,” Lee said. “The great thing about these kids is they want to pick each other up. If someone goes out and has a bad game, someone is right there behind them to pick them up and give it their best.”

Loaded with talent at the plate, Thorpe and Temple each went 2 for 3 against Spring Valley while Trumble finished 1 for 2. Thorpe sparked the victory with a triple, while Temple and Trumble each slugged a double.

Opening the season on a high note, Giunta finished 4 for 4 against Las Vegas, singling home Thorpe in the bottom of the ninth inning to clinch the victory.

“We hope to generate a lot of community support this summer,” Lee said. “These boys do a tremendous job on the field, and I’m hopeful the community will come out and watch them.”