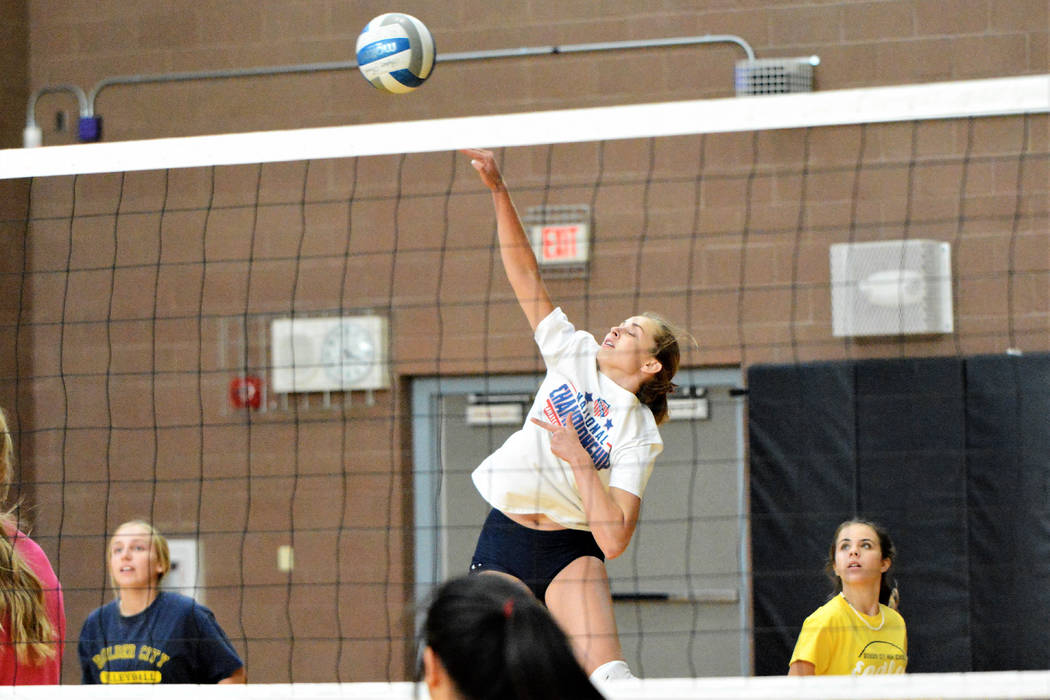 (Robert Vendettoli/Boulder City Review) Rising through the air, junior Kamry Bailey throws down a strike at a Lady Eagles pre-season practice in August. At Tuesday's game against Rancho, she led the team with 30 kills.

Continuing their preseason gauntlet of 4A opponents, Boulder City will host Silverado today, Sept. 5, 2019, before heading to Basic on Tuesday, Sept. 10.

Finishing with an overall team score of 403, the Lady Eagles defeated rival Virgin Valley (525) by over 100 strokes. Earning her first, first place finish as a member of the Lady Eagles, senior Makaela Perkins finished with a score of 92.

Finishing in second place, freshman Camryn Schaper broke under 100 for the first time, shooting a 99, while senior Sydney Krumm finished third with a score of 102. Junior Paige Rudd rounded out the effort with a score of 110.

Boulder City will host their next league match on Tuesday, Sept. 10., 2019

Leading the way in singles, seniors Bretton Erlanger, Braden Soileau and Ty Pendleton each finished 2-0. Falling to The Meadows 7-11, Huxford and Jorgensen finished 3-0, while Pendleton and Soileau teamed up to finish 2-1.

The Lady Eagles rebounded 11-7, behind seniors Eugenia Kryshchuk and Tegan Pappas who finished 3-0 in doubles play.

In singles play, senior Sophia Morris finished 2-0, while seniors Olivia Mikkelson and Rebecca Mulherron each finished 1-2. Kryshchuk and Pappas finished 3-0 against The Meadows in their 4-14 defeat.

Both Eagles programs are back in action today, Sept. 5, 2019, against 4A Faith Lutheran.

Competing for the girls in the underclassmen race, freshman Courtney Williams placed 4th out of 118 runners, while sophomore Mary Henderson finished 13th.

The Eagles will travel to Sunset Park on Saturday, for the Larry Burgess-Las Vegas Invitational.