(Jamie Jane/Boulder City Review) In the Eagles’ 6-1 win over Mater East on Aug. 26, sophomore Roman Rose added a goal and an assist. 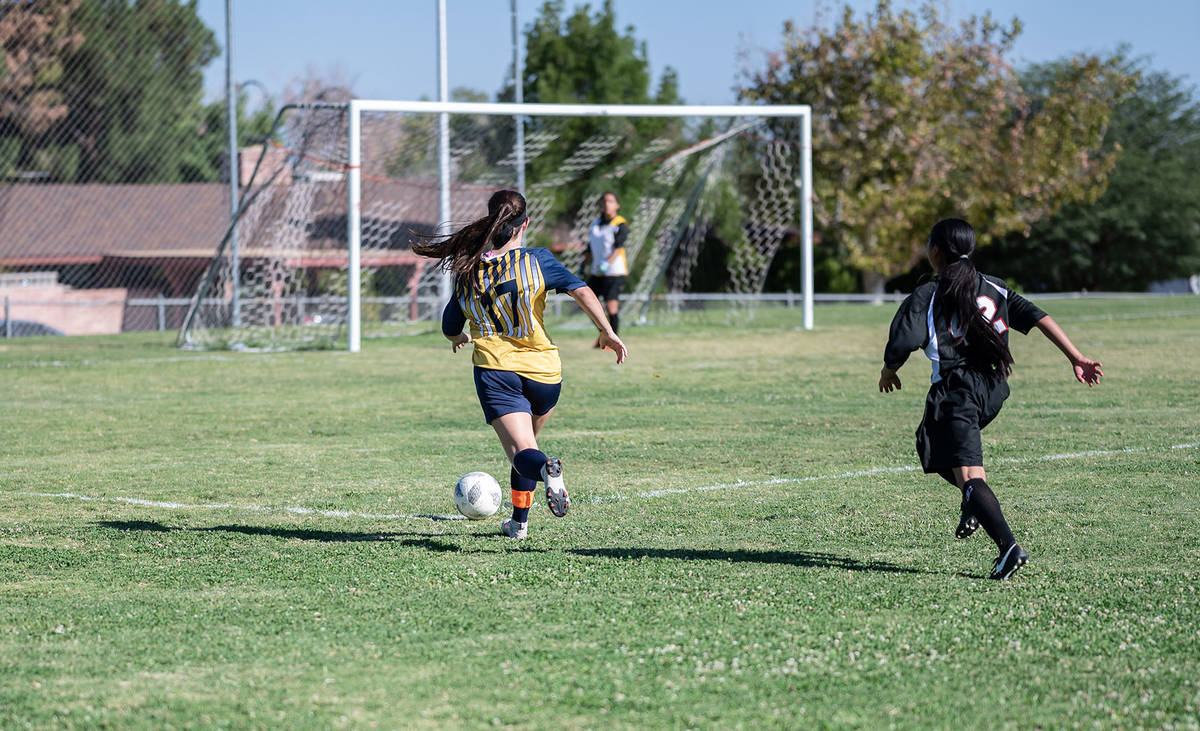 Coming off a 3A state tournament appearance in 2019, the Lady Eagles enter the season with state championship aspirations.

“This team has a completely different dynamic than our 2019 team that went to state, but in their own way they have a unique skill set that is probably going to make them better than that team,” girls head coach Arnold Oeland said. “We have our eyes set for state; that is our endgame.”

The Lady Eagles opened the season with a 2-0-1 record after their first week of play, routing Mater East 8-0, while tying with Virgin Valley 2-2. They picked up a forfeit victory over Chaparral on Aug. 24.

In the rout of Mater East on Aug. 26, freshman Abbey Byington achieved a hat trick on the day, scoring three goals, while junior Bree Leavitt added a pair of goals.

Scoring a goal each for the Lady Eagles were junior Ashley Mendez and freshman Makayla Nelson. Sophomore Nathasha Oeland added a goal with two assists. Junior Elizabeth Wirthlin also added an assist, and senior Paeton Carver pitched a shutout in the net.

“Our goal is to diversify our striking attack,” Oeland said. “We want to attack from the left, right and double center. We have a few girls that are absolutely amazing at striking at the net and that helps with our offensive strategy.”

Avenging a state tournament loss to Virgin Valley in the 2019 state tournament, the Lady Eagles tied with the Bulldogs on Tuesday, Aug. 31, 2-2, behind a goal each from Nelson and Leavitt.

The boys started the season with a victory, defeating Mater East 6-1 on Aug. 26.

“We worked really hard over the summer and came out ready for our first game,” boys head coach Haden Jaramillo said. “It’s a big relief and weight off our chest to get a win. Our goal this year is to make the playoffs and hopefully go deep in the playoffs. We have a really young team. I expect to see a lot of growth and improvement as the season moves along.”

Recording a hat trick on opening day, junior Gavin Kesler scored three goals for the Eagles, while freshman Sean Pendleton added two goals. Sophomore Roman Rose added a goal and an assist each for the Eagles, and freshman Robert Crowl added an assist.

“All these guys are going to be big parts of our offense,” Jaramillo said. “Look for Luke Wright to also be a strong player for us. He’s a freshman as well who’s continuing to grow and get better.”

The boys host Cristo Rey today. The girls will remain off until Sept. 10.