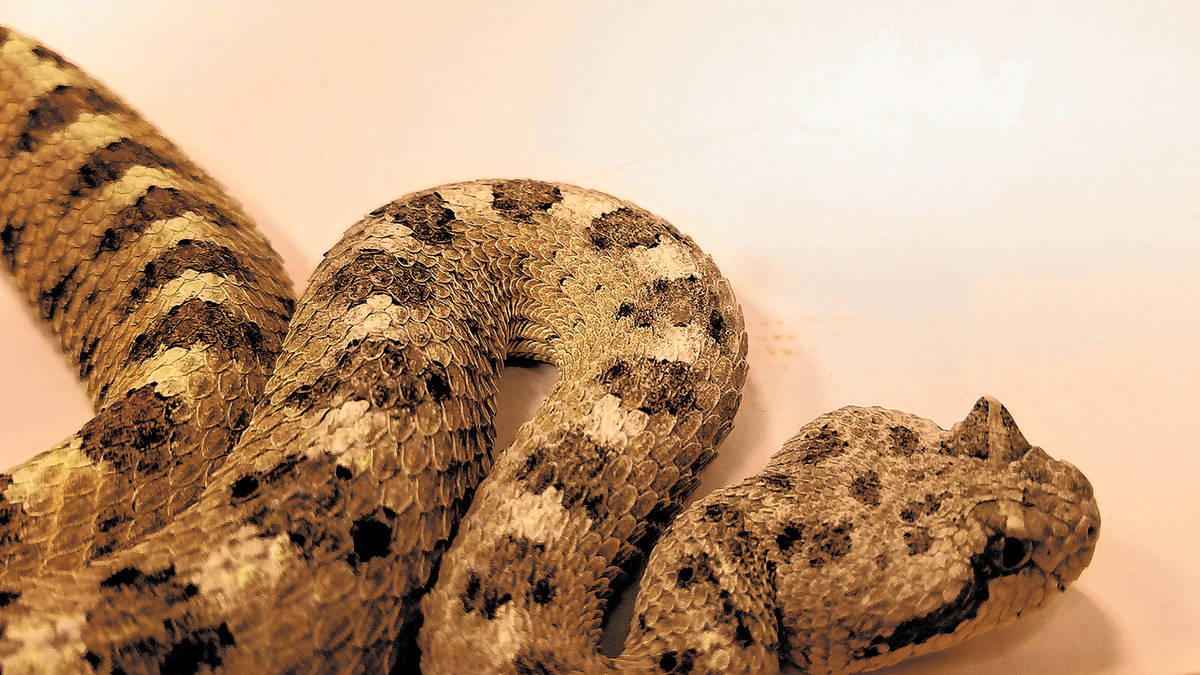 (Natalie Burt) A sidewinder rattlesnake was brought to REI in a portable, secured terrarium for a summer talk by herpetologist Bob McKeever. 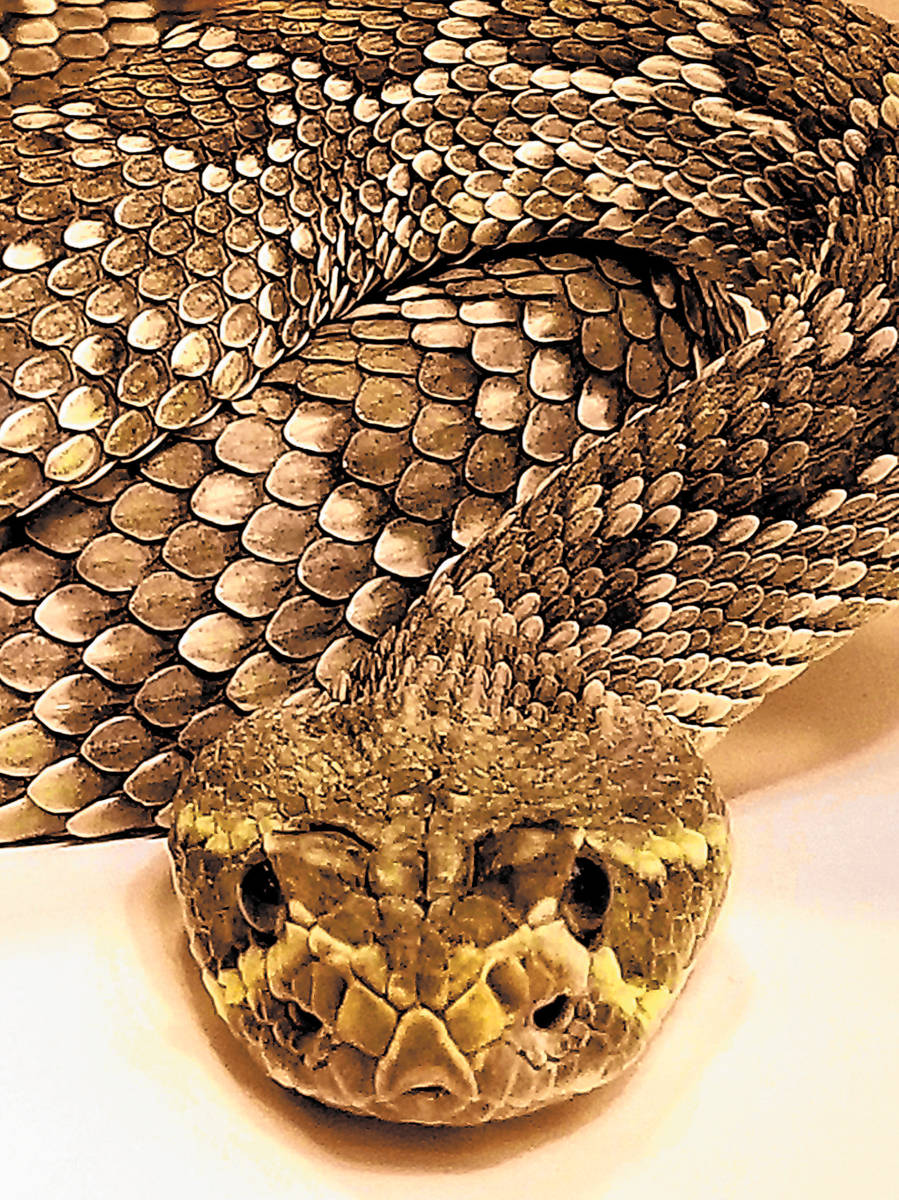 (Natalie Burt) A Mojave green rattlesnake has the most potent venom of any rattlesnake in the Nevada desert. 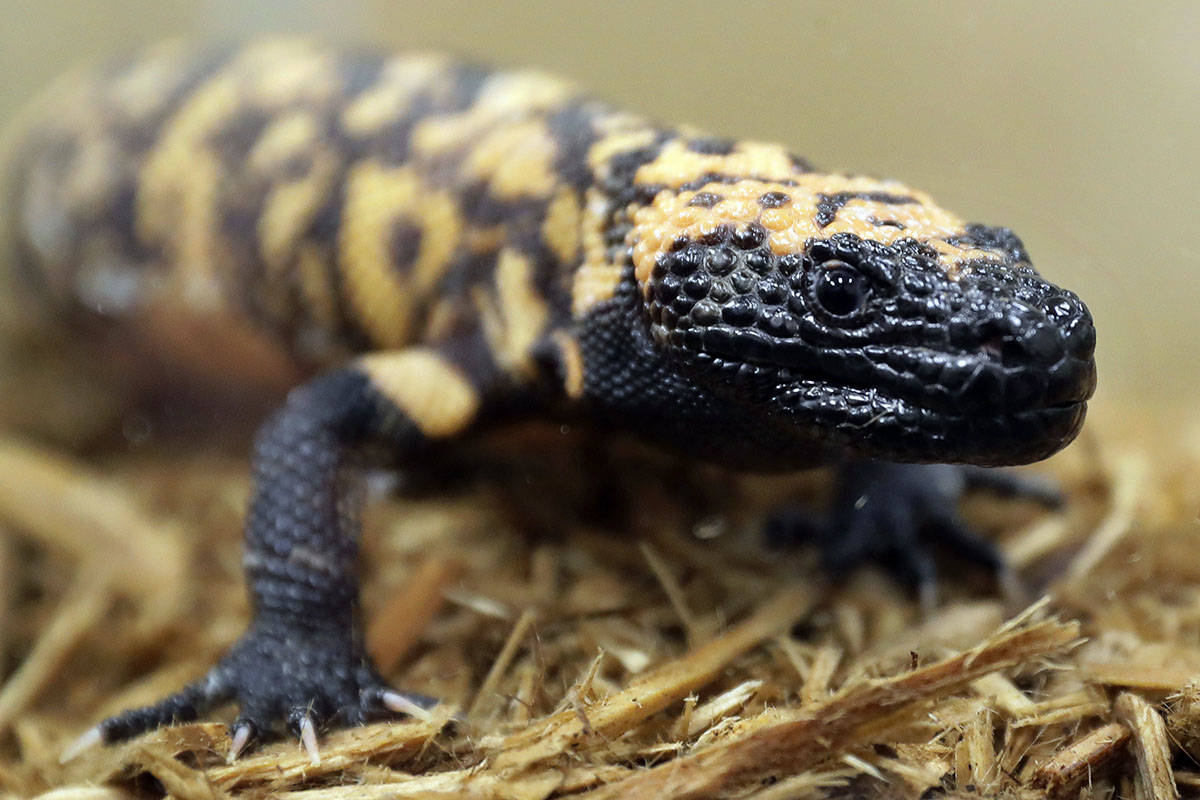 Ted S. Warren/AP Photo) A Gila monster, seen at the Woodland Park Zoo in Seattle, is a venomous and slow-moving lizard native to the Southwestern United States. 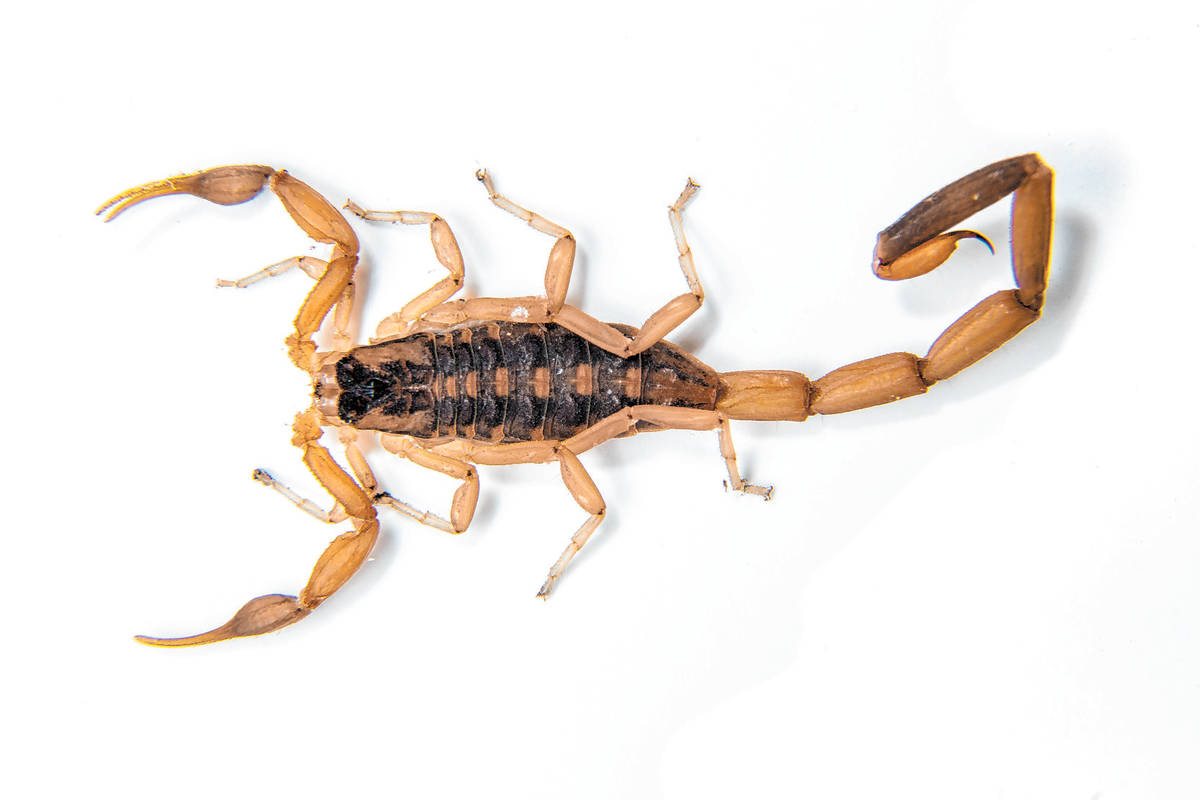 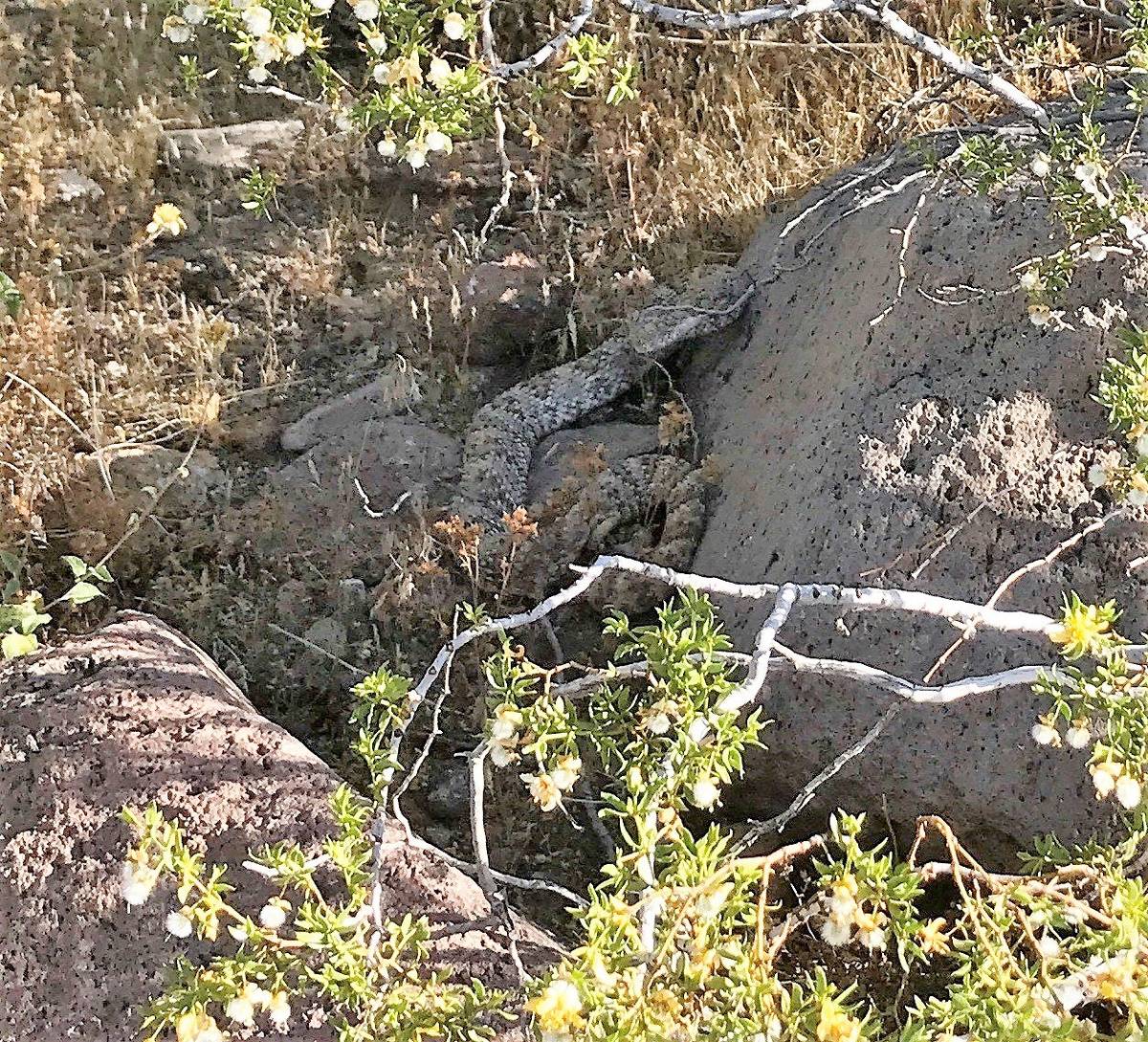 (Doug Nielsen) Southern Nevada is home to six species of rattlesnakes. This speckled rattlesnake sought cover in this shady spot along a busy hiking trail in the McCullough Mountains near Henderson.

The Nevada desert is home to abundant wildlife, but Doug Nielsen, a conservation educator at the state’s Department of Wildlife, offers a reason why residents may not see it very often.

“The only animal that’s dumb enough to be above ground in 110 degrees is us.”

Whether you’re hiking or hanging in your backyard this summer, you may run into one of Nevada’s 32 venomous species. It’s important to know the animals you may encounter — and actions to take to have positive interactions.

Of the 32, five are rattlesnakes, 26 are arachnids and one is a rarely seen lizard. They are classified as venomous because they inject toxin into their prey.

Reptiles need to move in and out of the sun and shade to thermoregulate, or adjust their internal body temperature, and are active from mid-spring to late fall. During the day they seek shade just like humans. Scorpions, however, are nocturnal, meaning they come out only at night.

Gila monsters spend more than 80 percent of their lives in burrows. When they do emerge, these large lizards feed on eggs and small mammals such as mice and rabbits, other lizards and insects. Gila monsters store fat in their tails, allowing them to spend months below ground.

They can grow to two feet in length and weigh up to five pounds. Their jaws are incredibly strong. They inject venom into their prey through chewing; that venom can cause swelling, nausea and vomiting. No deaths from a Gila monster bite have been reported since the 1930s, according to the Utah Division of Wildlife Resources.

Although the venom is dangerous, it can also be a lifesaver. Researchers have created a synthetic version of a hormone in the lizard’s saliva that is used to treat Type 2 diabetes.

Urban sprawl is causing Gila monsters to lose their natural habitat. Climate change disrupting water cycles is also causing a decline in numbers. Unlike most lizards, they do not get water from their food. When the spring rains come, Gila monsters will emerge to eat and drink. Then they’ll go back underground and wait for the summer monsoons before they re-emerge.

Gila monsters have beaded skin (many large bumps) and are orange with black banding. Nielsen said that “the banding on a Gila monster is like a fingerprint. They’re each unique.”

Rattlesnakes are not aggressive; however they will defend themselves against predators, including humans. If you disturb a rattlesnake, it may try to escape to shelter.

The first line of defense for a rattlesnake is crypsis — an animal’s ability to be camouflaged in its habitat to avoid being seen by predators. Next is its rattle. It is saying, “Hey, maybe you don’t see me, or maybe you’re trying to eat me. I’m just going to let you know I’m venomous.”

Nielsen advised if you hear that rattle, stop moving, identify where the snake is, then give the snake space. If you’re on a trail, give it a wide berth as you walk around it. If it’s in your backyard, back away, it will probably leave on its own.

Residents should keep yards clean, “because if you have clutter, dead branches, or garbage stacked up in part of your yard, then you’re going to attract things. Mice and rats, of course, will attract the snakes,” he added.

The sidewinder is named for the way it travels — it moves to the side in an ‘S’ pattern. It is the smallest rattlesnake in Nevada and likes to be partially buried in the sand. It is also called the horned-rattler because of the two hornlike scales over its eyes.

Great Basin rattlesnakes can vary in color but are often some shade of brown or gray. They’re widely distributed across the state, but not found in Clark County.

Snake venom destroys skin tissues and blood cells, which can result in internal bleeding. According to the University of Florida Department of Wildlife Ecology and Conservation, one in 37,500 people are bitten each year in the U.S., so the average person’s risk is very low.

If you are bitten, do not try to kill the snake. Activity will cause your heart to pump venom to other parts of the body faster. Even when beheaded, a rattlesnake can still strike and envenomate (inject venom) a second time.

If you can, take a photo of the snake so doctors can quickly administer the right kind and dosage of anti-venom. Nielsen emphasized that venom extraction kits and other home remedies, such as sucking out the venom, will only cause more damage.

A rattlesnake bite that releases no venom is called a dry bite. Partial or full doses of venom are possible. The amount of time you have before it’s too late to seek treatment depends on how much venom you received.

Jay Fisher, medical director of the Pediatric Emergency Department at University Medical Center Children’s Hospital, said it is easy to know if a rattlesnake bite does result in envenomation.

Within a few hours the toxin will begin to wreak havoc on the body. “Whenever we think a real envenomation has occurred and venom has been released, we admit the patient and immediately begin our strategy of determining whether or not the patient needs the anti-venom. The question, though, of how much venom is always very, very difficult,” Fisher said.

If you wait for sunset, step outside and shine a black light on the ground, you’re almost guaranteed to see the smallest venomous creatures in Nevada, scorpions, glowing on the desert floor as they scurry around.

Scorpions have been around since before the dinosaurs. “They are some of the oldest animals, living over 450 million years ago. They’ve been relatively unchanged,” said Michael Webber, a professor of biology at the College of Southern Nevada. These nocturnal arachnids generally range from one to three inches in length, but some can reach up to six inches. Scorpions tend to have light or dark brown legs and stingers with brown to black bodies. Some scorpions have light and dark banding on the body.

You’re most likely to find scorpions in newly developed areas and around irrigation, as the water attracts their prey: small insects. According to Webber, the best way to keep scorpions out of your home is to seal cracks where they can find their way in. Many of the 25 species of scorpions in Nevada are relatively harmless. The sting is similar to that of bees and probably won’t be a serious medical event unless you are allergic, she explained.

However, the sting of the bark scorpion can be serious, especially for young children and the elderly. Bark scorpions can crawl on walls or ceilings, Webber said. If one is found in your home, use a long pair of tongs or tweezers to remove it.

Like Gila monsters and rattlesnakes, scorpion venom is being used to develop treatments for various diseases in humans, including cancer.

Earyn McGee is a 2020 Mass Media reporting fellow through the American Association for the Advancement of Science. Email her at emcgee@reviewjournal.com. Follow her on Twitter at @Afro_Herper.