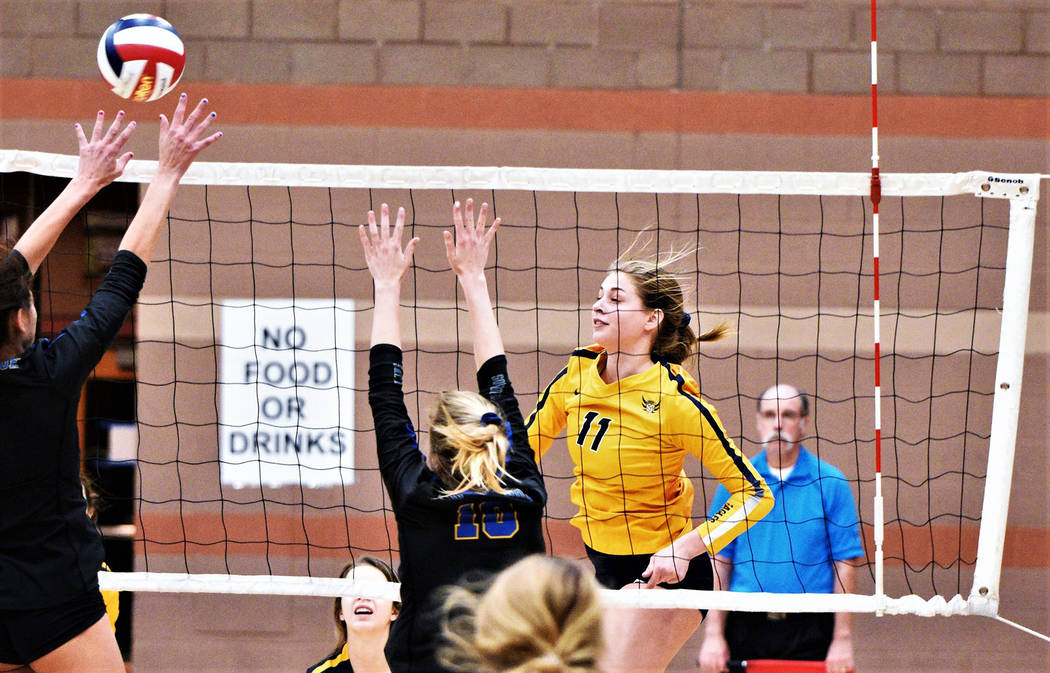 (Robert Vendettoli/Boulder City Review) Boulder City High School junior Kamry Bailey, seen throwing down a spike against South Tahoe on Nov. 15, was named to the All-Southern Nevada first team after earning the 3A player of the year honor for helping the Lady Eagles win their third-consecutive state championship.

Seven Boulder City High School athletes made the All-Southern Nevada, representing the top athletes regardless of classification and showcasing their excellence in their respective sports.

“For our community, our school, this is big,” Boulder City athletic director Alex Moore said. “This shows we can compete with the 4A schools. We have been for a long time and now we’re finally getting the recognition for the hard work that our kids and our coaches are putting in.”

“That a huge honor for our program to have as many selections as both those teams,” girls volleyball head coach Kurt Bailey said. “I feel like our team has earned that. Our girls can definitely play with those teams. In the summer they beat both Durango and Bishop Gorman at the UNLV camp. Our girls deserve this recognition after all the hard work they’ve put in and the accomplishment they’ve achieved.”

Named to the first-team for volleyball were juniors Kamry Bailey and Ava Wright, who helped lead the Lady Eagles to their third consecutive 3A state championship.

“It means a lot to me to be named to the All-Southern Nevada team, especially because 3A players normally don’t get much recognition for these types of honors,” Kamry Bailey said. “I had this goal in mind, not just coming into this year, but since my freshman year. I’m really happy that I was able to pull it off.”

Named to the second team were senior Raegan Herr (336 kills, 163 digs and 84 aces) and sophomore Kate Prior (291 kills and 78 blocks). Routinely dominated by upperclassmen, Prior was one of only four sophomores to make either the first or second team.

“Kate totally changes the game,” Kurt Bailey said. “She makes other teams pay attention to her. When she hits the ball, it’s hard and effective and, of course, her blocking ability is unreal. For her height and her age, she’s a phenom. It’s very special that she’s on our team. It wouldn’t matter if she played on a 3A, 4A, 2A team, she would be there regardless.”

Sophomore Zoey Robinson rounded out the Lady Eagles’ core with an honorable mention selection after playing a large role on defense for the team with 316 digs and 116 aces.

Earning high praise of their own, senior Keely Alexander and freshman Genevieve Balmer were named to the All-Southern Nevada team in girls soccer after helping Boulder City High School make its first 3A state tournament appearance since 2011.

Alexander made the first-team after she was named 3A Sunrise League player of the year for providing excellent defense during the Lady Eagles’ 17-5-1 season.

Balmer was named an honorable mention selection, after leading the Lady Eagles with 60 points, generating 25 goals with 10 assists.