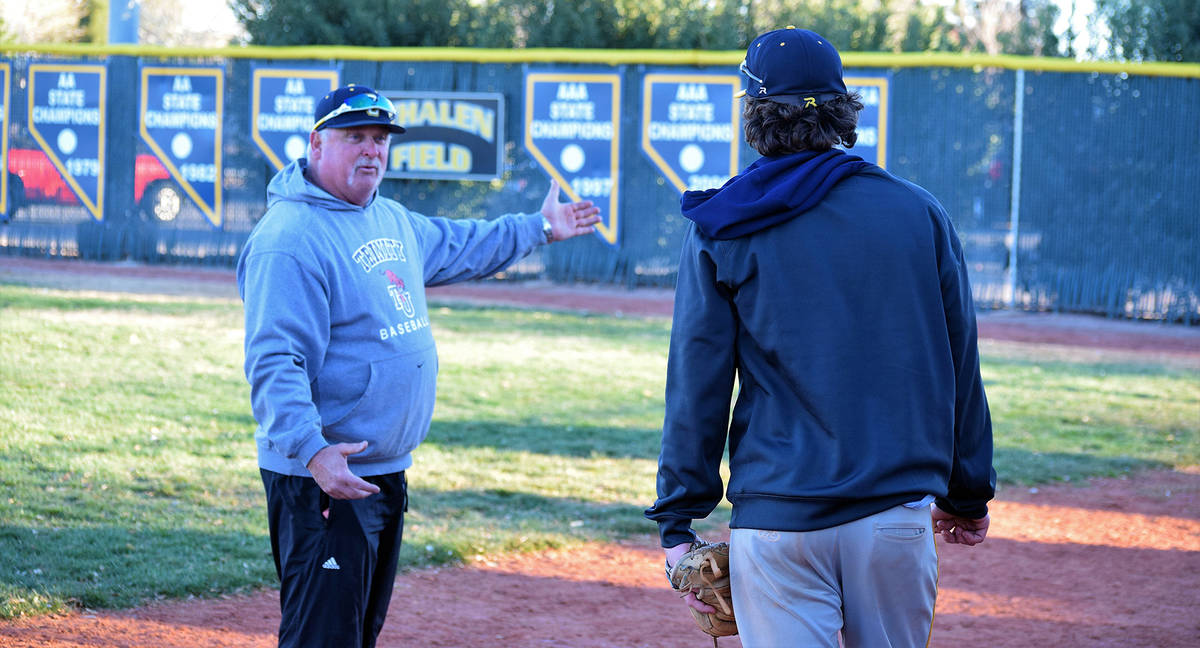 Boulder City High School's head varsity baseball coach Ed McCann, seen shortly after he was hired in 2018, laments the cancellation of the spring sports season and feels sad for his seniors who won't get the opportunity to vie for a championship.

The latest development in the ongoing COVID-19 saga that has put a stop to high school athletics since March 12, the final decision by the association’s Board of Control meeting on playing out the remainder of spring athletics came a day after Nevada Gov. Steve Sisolak said schools would continue distance learning through the end of the school year because of the coronavirus pandemic.

“When the governor announced that all schools would continue with distance learning for the remainder of the school year, I was heartbroken for our students, especially our seniors,” said Boulder City High School Principal Amy Wagner. “Along with other end-of-school-year events, I will especially miss our seniors playing in their final games as Eagles.”

Baseball coach Ed McCann said he understood the decision, but was still hurt that his team was unable to fulfill its championship aspirations.

“With everything going on in the world, I think they had no choice but to cancel the season,” McCann said. “It’s upsetting for our players but I know the NIAA did their best to get our season back. They kept postponing their decision, which gave us all hope. I’m sad for our seniors who won’t get the opportunity to play again, but I do know that this will create a hunger to compete again for my underclassman.”

Even with recent events being understandable, the decision is still a bitter pill to swallow for athletes, especially the senior class.

Chasing championship aspirations of his own, senior boys volleyball player Boen Huxford said he was hurt by the decision of not getting to play out his final season with the program.

“The cancellation of the season has been really hard especially because I’m a senior,” Huxford said. “For the rest of my life I’ll remember that I never had the opportunity to play a normal season. It makes me sad to think that I’ll never be able to finish what I had started as a freshman when our men’s volleyball team was created.”

With spring athletics officially canceled, the question remains: How long will social distancing in the United States take place and what next could be affected?

Connie Mack summer baseball for the Eagles was expected to start in June, but no official word has been given on the status of this upcoming season.

Summer athletics on the travel circuit for top basketball and volleyball players at Boulder City High School has also been affected by the pandemic.