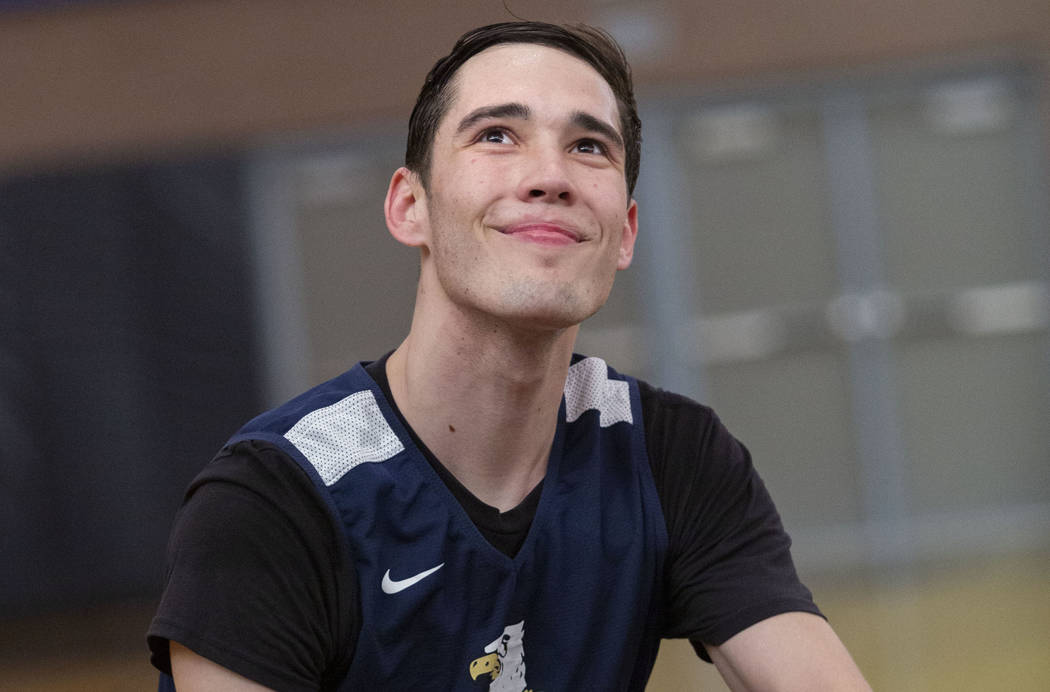 (Elizabeth Page Brumley/Las Vegas Review-Journal) Junior Ethan Speaker runs drills during practice at Boulder City High School on Wednesday, Jan. 15. He has transformed from role player into a star for the Eagles this season and is attracting attention from Division I universities. 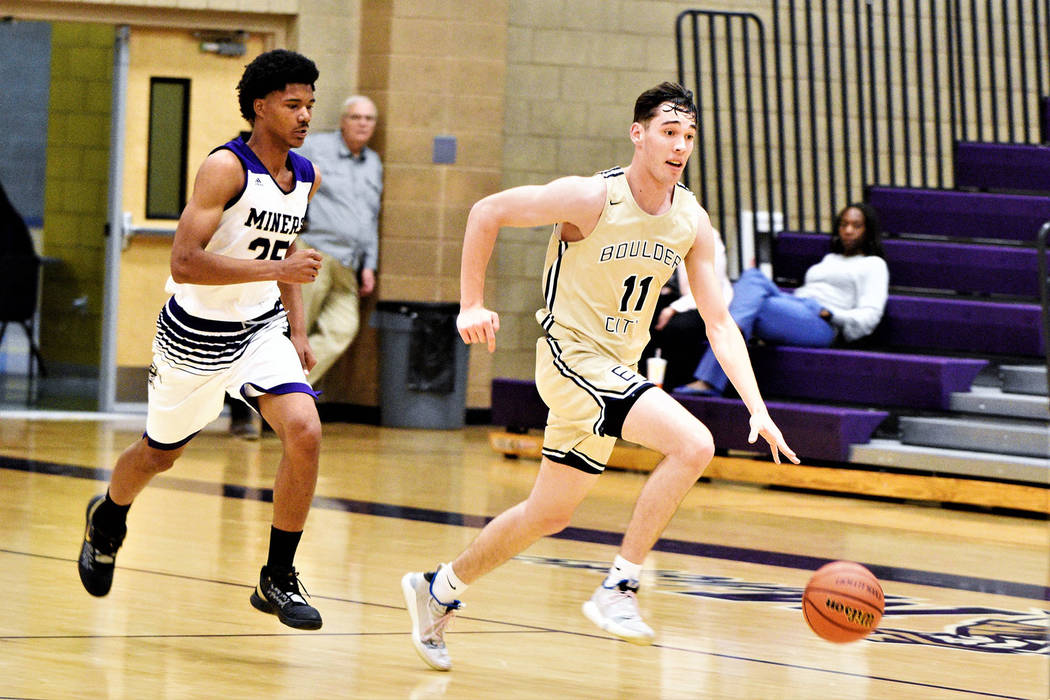 (Robert Vendettoli/Boulder City Review) Driving past his defender, Boulder City High School junior Ethan Speaker makes his way up court against Sunrise Mountain on Monday, Jan. 27, 2020. He scored a game-high 30 points with 21 rebounds in the Eagles’ 60-43 victory and is attracting attention from scouts for Division I universities.

When Boulder City High School star basketball player Ethan Speaker steps onto the hardwood, all eyes are on him — eyes of his coach, opposing players and coaches, the crowd and college recruiters and evaluators.

As he starts to fulfill his untapped potential, the junior is developing into a collegiate basketball prospect.

“When I scout Ethan, I see a player who can do several different things on the basketball court,” said high school basketball scout Bruce Williams, an evaluator with Prehoops.com who has watched Speaker play a handful of times. “I always look for guys who can still help your team win, even when they don’t have the ball in their hands and aren’t shooting. Ethan can rebound the basketball; he’s a willing defender. He’s a guy who can make contributions to a team in several different aspects.”

Scouting the high school scene for seven seasons, Williams said he believes Speaker has what it takes to play Division I basketball.

“Ethan has the production of a Division I player,” Williams said. “He has the size and the offensive ability. At 6 (foot) -6 (inches), he can create his own shot and is a better athlete than given credit for. I expect him to see offers from mid-major programs. He’s one of the top juniors in town.”

Making a name for himself, Speaker has transformed from role player into a star for the Eagles this season, averaging 24.7 points and 10.2 rebounds, including 30.8 points and 13.5 rebounds in Class 3A Sunrise League play.

A big jump from his regular season averages of 13.1 points and 9.2 rebounds as a sophomore, Speaker credits his time on the Adidas summer basketball circuit with local grassroots program Las Vegas Knicks for his transformation.

“This rise this season was something that I hoped would happen and I’m glad it did,” he said. “My time with Knicks has made me a better player. The gauntlet that we play on is very competitive and has helped bring me to the level that I play at.”

Noticing that Speaker has blossomed into a well-rounded player, Eagles head coach John Balistere said he is pleased with the transformation of his star junior.

“Ethan is a special player,” Balistere said. “When it’s all said and done, he’ll be remembered as one of the best to ever play at Boulder City. It’s been a huge joy to coach him the past three years. He’s a very coachable player and his upside is sky high. I’m very excited for him right now. He deserves all the interest he’s receiving and I know he’ll do great things when his time here is done.”

Searching for his first collegiate offer, Speaker has played like a man possessed this season. Fighting through double teams for baskets and boxing out for rebounds, Speaker has clearly shown his hunger. Now it’s only a matter of time before the rising junior prospect eats.

“There are several schools that I’m in contact with but no offers yet,” Speaker said. “I’m very hungry to get my first.”