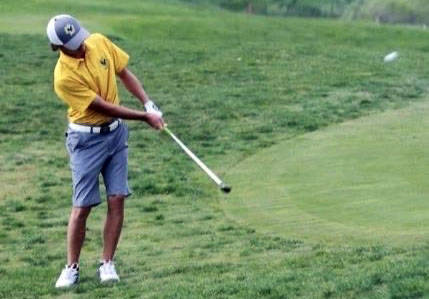 Blake Schaper, who was a star player on Boulder City High School’s boys varsity golf team as a junior, has committed to Division I program South Dakota State University in Brookings.

Having thoughts of becoming a hometown legend and starting his collegiate career at nearby UNLV, Schaper notes that the Rebels were in the running for his services but that a chance to experience life away from home was too enticing to pass up.

“I thought about UNLV, but I ultimately decided that I wanted to have a college experience away from home,” Schaper said. “I was considering other colleges, but South Dakota State was by far the best fit for me. When I visited the campus last fall, I wasn’t expecting much but I was blown away by how awesome the campus and the town of Brookings was. My favorite part about the school is the athletic facilities.”

Heralded as one of the top golfers in the state, Schaper was named to the All-State second team as a sophomore, finishing as the 3A individual champion runner-up at Genoa Lakes Golf Club in Reno, with an even-par score of 144 over the two-day event.

A 3A Southern Region first-team selection as well, Schaper won five Sunrise League matches last season and placed first in his lone league match this year March 10 at The Club at Sunrise before the COVID-19 pandemic canceled the remainder of his junior season. Putting his skills to the test against the state’s top golfers March 6, Schaper placed 13th at the 4A-laden Pahrump Valley Invitational that featured 91 players from top programs like Bishop Gorman, Coronado and Palo Verde.

With more collegiate suitors sure to come, Schaper said he thought it was best not to put off his collegiate decision, stating the time felt right to commit to the Jackrabbits.

“I do have a year of school left, but I knew that I was ready to be a Jackrabbit,” he said. “The coaching staff is amazing and I feel like they could help me achieve some great things in my future.”

Getting a firsthand look at the program from former Boulder City High School golfer, class of 2018 graduate Lani Potter, who just finished her sophomore season with South Dakota State, was a big influence on Schaper’s decision.

“I’ve talked to Lani a little bit when she was last in town,” he said. “She has definitely helped me get a feel for the school and how fun it’s going to be. It will also help to have someone that I know when I get there.”

The announcement of Schaper’s commitment is also a plus for Boulder City High School’s golf program, which is becoming a hotbed for future Division I talent.

Sending two golfers to South Dakota State in the past two years, the groundwork has been laid for future Eagle golfers should they choose to put in the work and seek collegiate opportunities.

“I think the biggest thing our small town has going for us is having two courses,” said Boulder City High School golf coach Andy Schaper. “These kids have the ability to practice and get better whenever they choose, and really the sky’s the limit to how good they want to become. Both Blake and Lani worked hard at their craft and they made sacrifices to play a Division I sport. They’ve both showed what it takes to get to this level.”