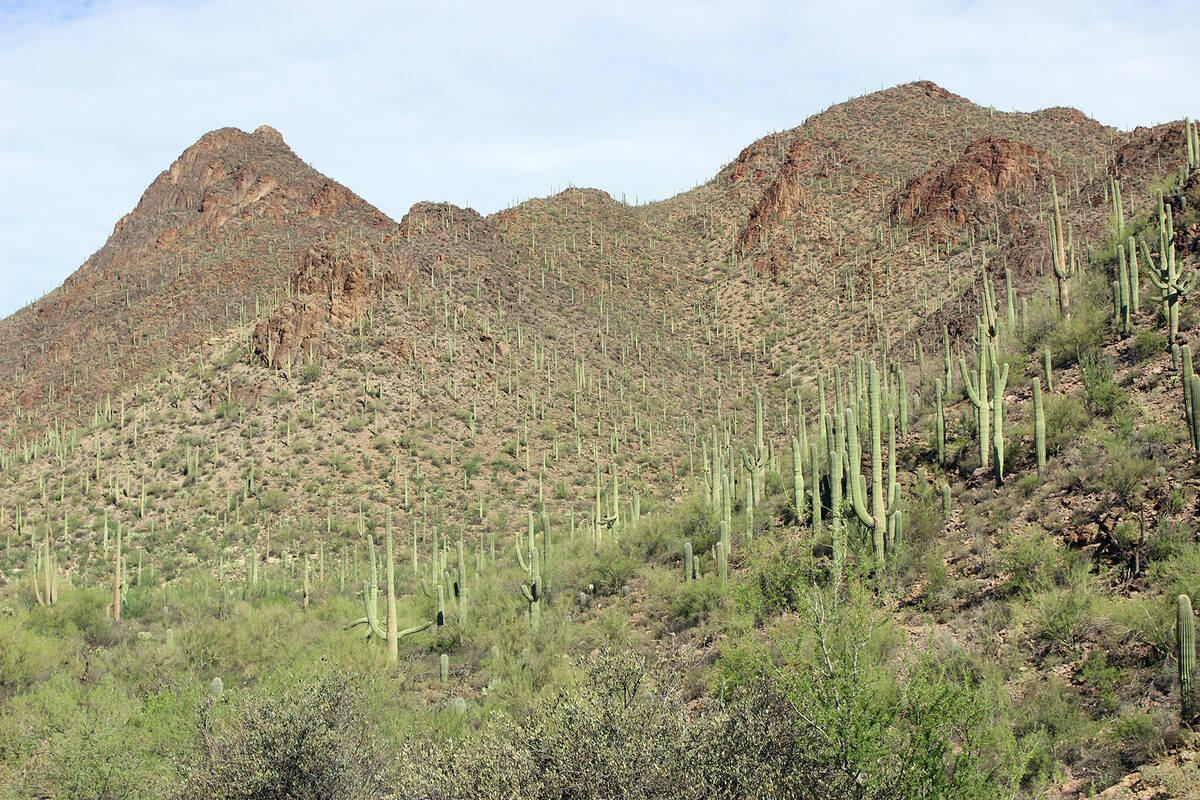 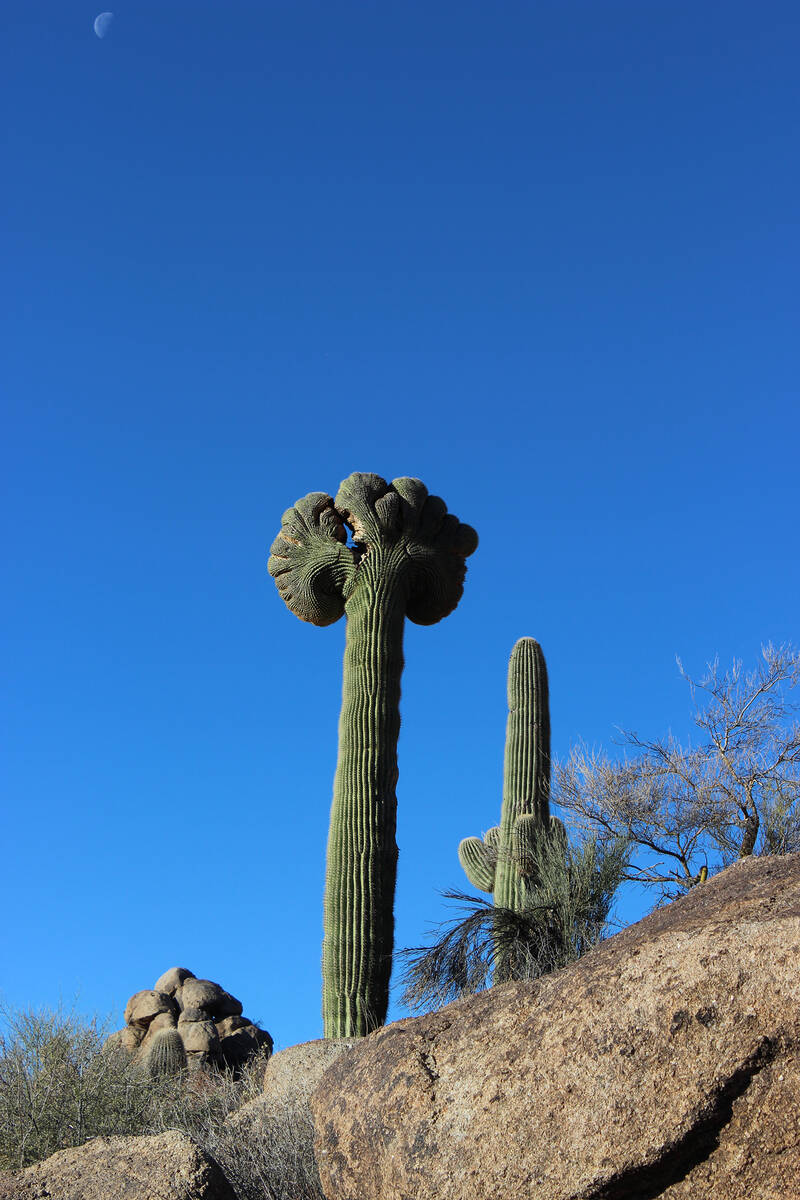 (Deborah Wall) It is a rare sight to see a crested or cristate saguaro cactus such as this one found near Wickenburg, Arizona 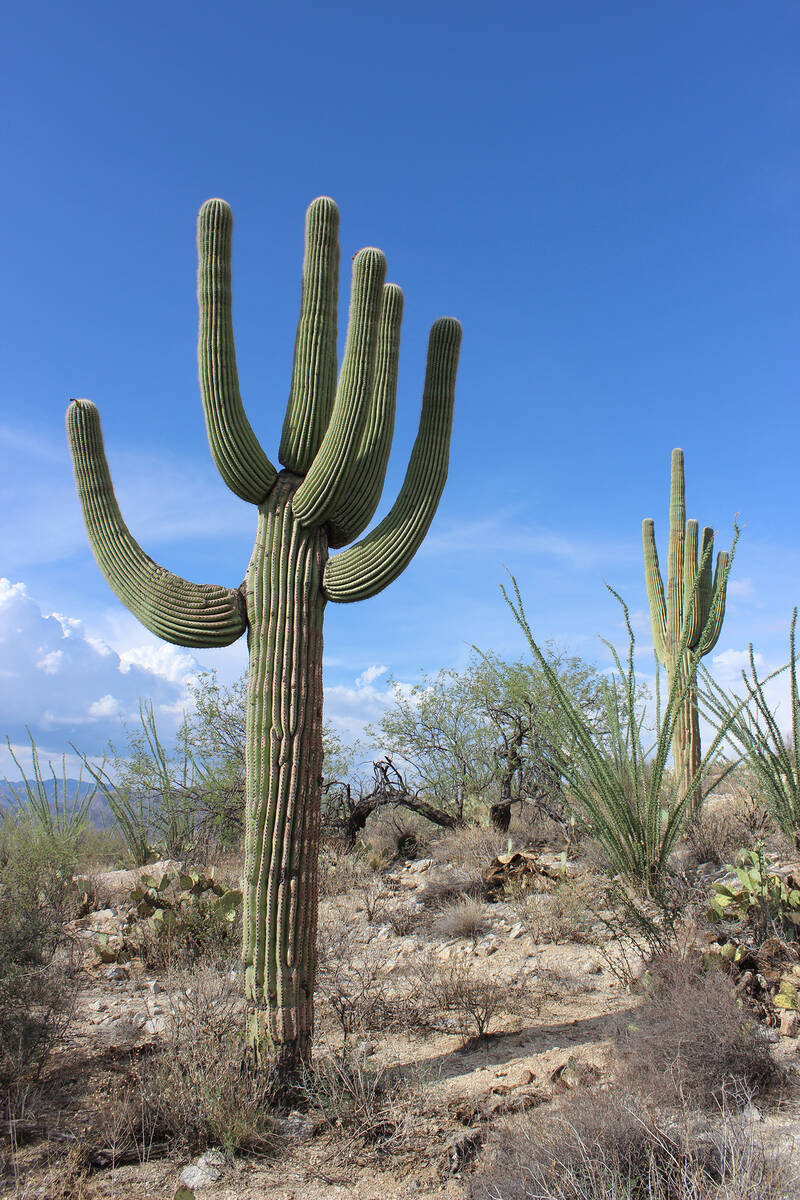 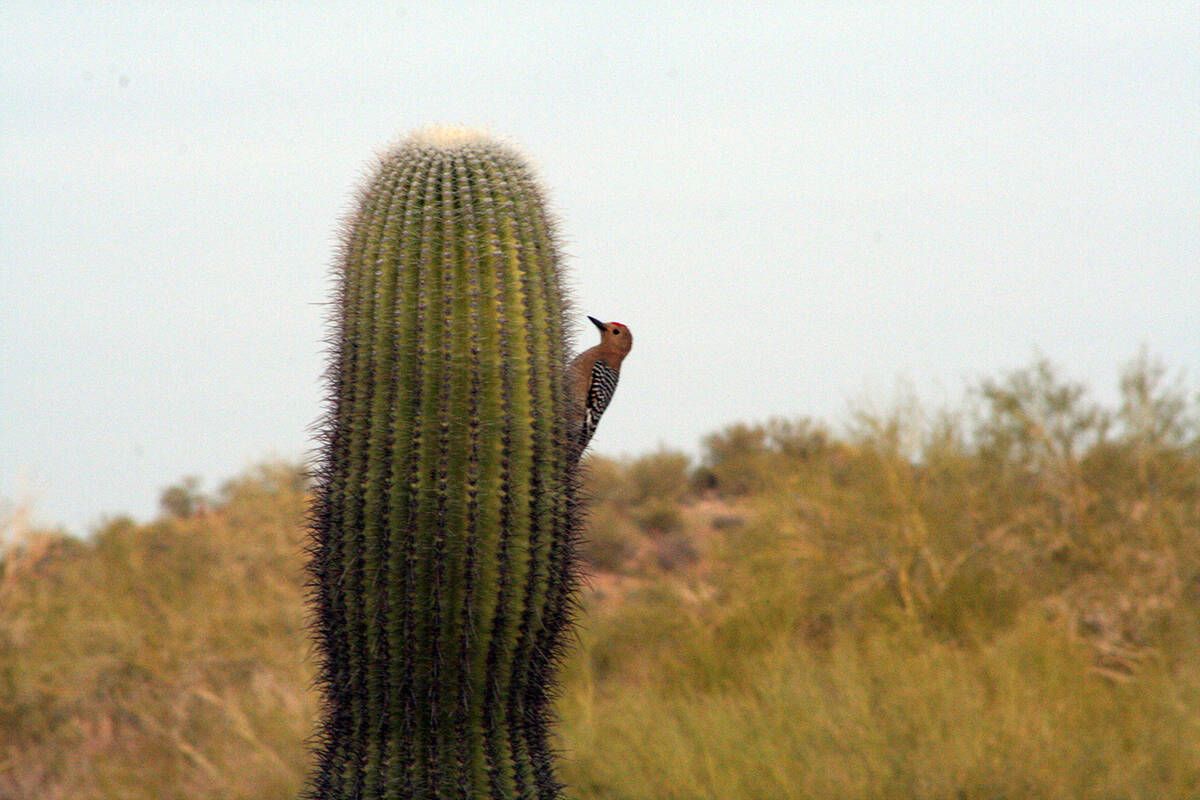 (Deborah Wall) It is common to see Gila woodpeckers in areas where saguaro cacti grow. 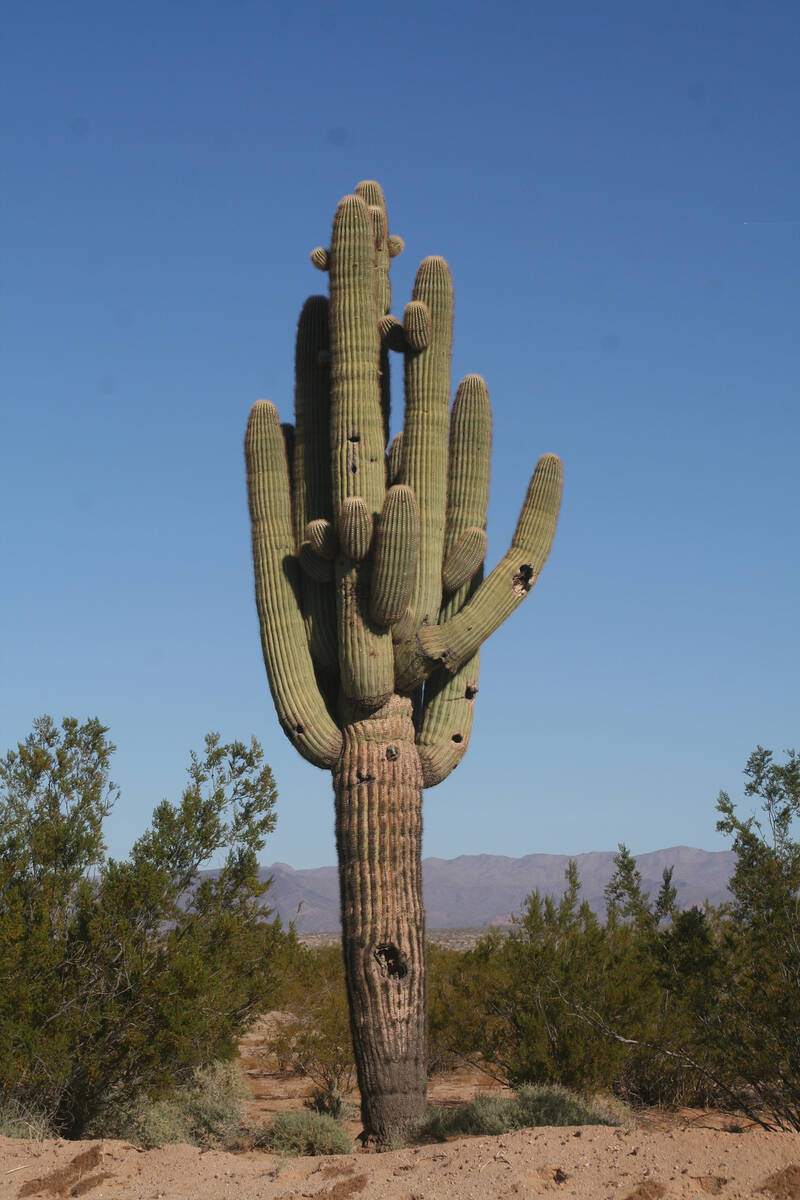 (Deborah Wall) Some of the holes you see on saguaro cactus were made by Gila woodpeckers and gilded flickers that make nest cavities in the saguaro.

Saguaros are extremely slow growers and even a small one, a couple of feet high, might be 30 years old. At a quick glance, these small columnar ones can be confused with other cacti, such as the barrel cactus, for a saguaro’s first arms might not grow until the plant is 50 to 100 years old. Some saguaros don’t ever grow arms.

The saguaro only grows in the Sonoran Desert, but not in all areas, as they are limited by freezing temperatures. Elevation is also key, as they are usually found growing from sea level to about 4,000 feet. You may find saguaro growing above this elevation, but typically on south-facing slopes where freezing temperatures are less likely to occur for any long period of time. Your best bets for seeing them are in southern Arizona and western Sonora, Mexico, yet there are a few strays in southeast California.

The saguaro usually blooms in late April. Its showy white-and-waxy flowers appear at the top of its trunk or arms and open at night, then close by mid-afternoon. Flowers are pollinated by nectar-feeding bats, birds and insects. In June, the pollinated flowers produce red fruit, which was harvested by American Indians. Each of these fruits contain about 2,000 small seeds, yet few survive to seedling status.

When some birds, such as the canyon wren, or mammals, such as bats or coyotes, eat the seeds, they pass through them undisturbed and can be found in their droppings. Such an event, of course, could result in a new cactus. But some seed-eating birds including doves and quails completely consume any seeds in their digestive tracts.

The saguaro is host to many avian species. The gilded flicker and Gila woodpecker make nest cavities in the fleshy interior and once they abandon that space, elf owls, purple martins and finches often take over the home. Large birds such as Harris’ and red-tailed hawks sometimes build their nests among the cacti arms.

The pleated appearance of this cactus serves a very good purpose. When the saguaro grows, shallow roots spread out in a radial way under the ground about 3 inches deep. A single tap root will go down to a depth of about 5 feet. During heavy rains the plant will absorb as much water as it can through the roots and then these pleats expand like an accordion.

When it is very hot and dry the plant can use this stored water to survive; then the pleats contract. Depending on how much water they amass they can swell or shrink by 20-25 percent over a course of a year. When the plant is at full capacity, a grown saguaro can weigh more than a ton.

The Sonoran Desert is tough on plants, yet the saguaro is a master of survival. Look at its waxy coating that keeps in moisture and the hard spines that keep all but the most determined critter from feasting on its flesh.

Consider yourself very fortunate if you happen along a rare crested or cristate saguaro. This is where the growing tip fans out and often with a rounded appearance. Experts disagree on why this rare event happens but speculation runs from a lightning strike to freeze damage to a genetic mutation.

The biggest threat to the saguaro cactus is humans, through habitat loss from building, vandalism or stealing specimens for black-market landscaping. It is one of many plants protected by the Native Plant Protection Act and you will pay the consequences if you get caught stealing or vandalizing one.