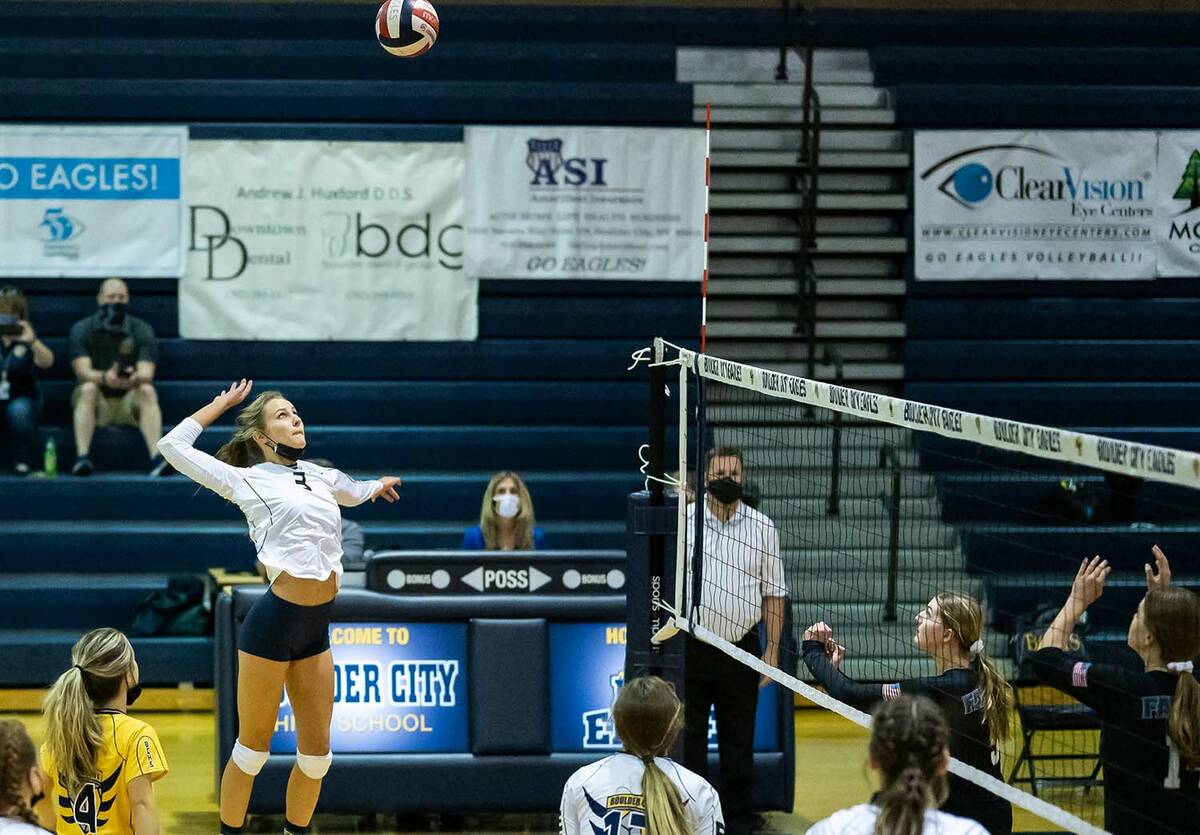 Playing a pair of 3A league matches, the Lady Eagles defeated Coral Academy and Pahrump Valley 3-0.

The Lady Eagles will host Desert Pines on Friday, Oct. 8, before traveling to Pinecrest Academy Cadence on Tuesday, Oct. 11.

Falling to 3-3 on the season, Boulder City High School’s football team lost a heartbreaker to Eldorado 15-14 on Friday, Oct. 1.

After scoring a pair of touchdowns in the first quarter, the Eagles weren’t able to get on the board, surrendering touchdowns to the Sun Devils in the second and third quarters.

Scoring in the first quarter on a 2-yard rush, junior Hunter Moore led the ground game with 81 yards on 14 carries, while busting out for a dynamic run of 33 yards.

Through the air, sophomore quarterback Jacob Bryant finished 8 of 16 for 108 passing yards, connecting with sophomore Brady Sorenson for a 38-yard touchdown pass. Sorenson finished with two catches for 46 yards.

Junior Torryn Pickard finished with one catch for 49 yards.

The Eagles will face SLAM Academy this Friday, Oct. 8.

Traveling to Liberty High School on Saturday, Oct. 2, for the Patriot Invitational, senior girls cross-country runner Mary Henderson finished first in a field of 33 for the Lady Eagles.

Following up with a weekday event Tuesday, Oct. 5, at Mission Hills Park, Henderson finished first out of 74 runners, competing against Basic, Green Valley and Liberty, among other 3A programs.

For the boys, junior Brayden Jones finished 12th out of 104 runners and Reinhart finished 22nd.

Hosting an event Saturday, Oct. 9, at Veterans’ Memorial Park, the Eagles will compete in the Lake Mead preregionals event to size themselves up against the competition, followed by a weekday race Tuesday, Oct. 11, at Desert Breeze Park for the Bud O’Dea Frosh-Soph Championships.

Playing at Legacy Golf Club on Tuesday, Oct. 5, junior Camryn Schaper finished fourth individually with a score of 90 on the par-72 course.

Competing against Coral Academy (536), which was the only other team with four available golfers for team points, the Eagles won the event with an overall score of 423.

The Lady Eagles will host the Prepping for the 3A southern regional tournament on Monday, Oct. 11, at Boulder City municipal and Tuesday, Oct. 12, at Boulder Creek.