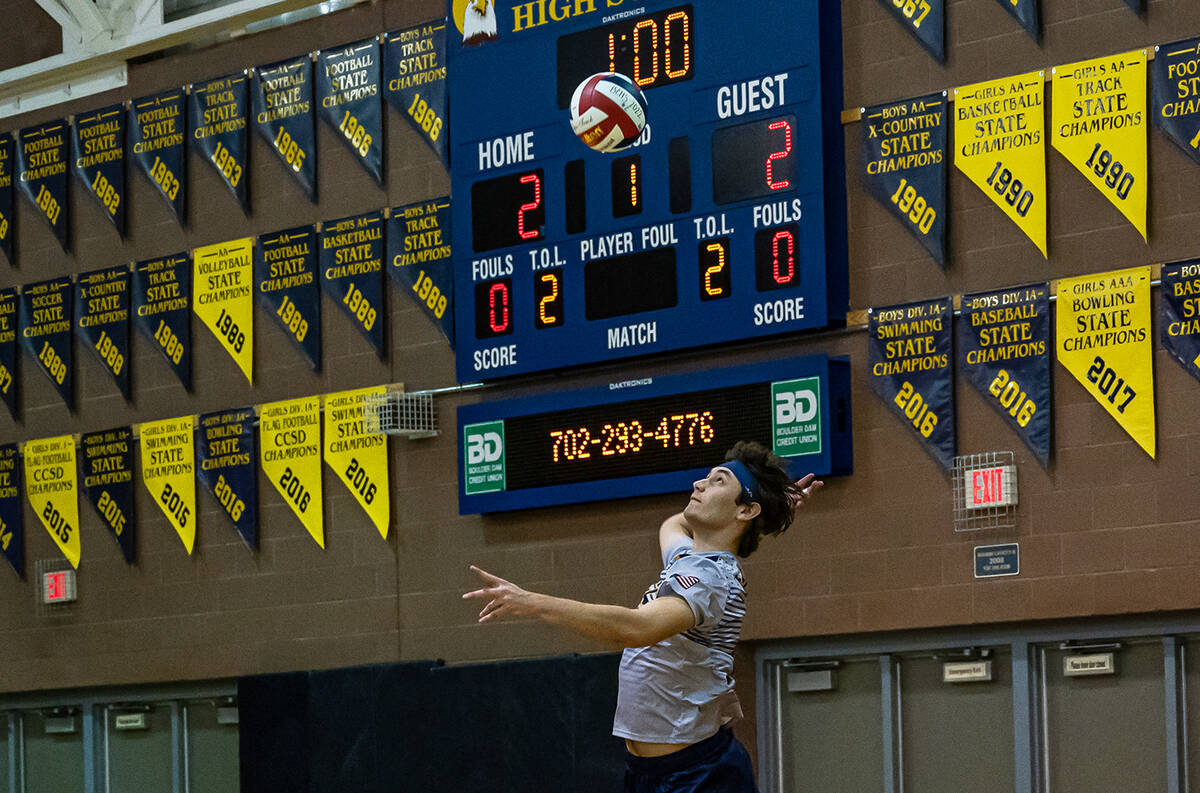 (Jamie Jane/Boulder City Review) Tyler Lemmel, a junior at Boulder City High School, is seen in action Tuesday, March 8, in the Eagles’ win over Pinecrest Academy Sloan Canyon. He made five kills during the six-game slate of the Las Vegas Invitational on Friday and Saturday, March 4 and 5,

Concluding its first week of play with a 3-4 record, Boulder City High School’s boys volleyball team is right where it should be, according to head coach Rachelle Huxford.

“Obviously we would have liked to win a few more games at the invitational, but I thought the boys played well overall. We saw some really good competition and we’re going to be better because of it.”

Finishing the 4A-laden Las Vegas Invitational with a 2-4 record, the Eagles picked up victories over Del Sol and Silverado, followed by losses to Clark, Green Valley, Sage Creek (California) and Quartz Hill (California).

Playing up to their competition, the Eagles dominated Pinecrest Academy Sloan Canyon in three sets, winning 25-11, 25-12, 25-5 on Tuesday, March 8.

Playing up in competition to start the season, Boulder City High School’s baseball team lost 6-4 to 4A Durango on March 3, but offered a glimpse of optimism entering a new year.

Playing with a bunch of first-year varsity starters after graduating eight seniors, the Eagles held a 4-3 lead heading into the bottom of the sixth inning before the loss.

Making his first varsity appearance, junior Brayden Cook hit 3 for 3, and junior Isaac Gibson batted 2 for 3 with a run batted in and a stolen base.

On the mound, Gibson got the start, throwing two scoreless innings where he struck out three batters and allowed one hit.

The Eagles will host 4A Silverado for a double-header on Friday, March 11, in the Southern Nevada 5A/4A Challenge, followed by a road game at 4A Foothill on Saturday, March 12. They’ll host 3A Cheyenne on Wednesday, March 16.

Boulder City High School’s softball team started the season off with a 1-4 record, picking up a 12-5 victory over Big Bear (California) on March. 3.

Competing in the Colorado River Invite, the Lady Eagles won their season opener behind a 3 for 3 effort at the plate from sophomore Alexis Farrar, who drove in four runs.

Senior Paeton Carver batted 1 for 2 with a pair of RBIs, while senior Alyssa Bryant (1 for 1), Lily Hood (1 for 3) and sophomore Jordyn Wetherbee (1 for 2) all drove in a run.

Hanging tough with their competition, the Lady Eagles fell to California programs Indio 5-1 and Palo Verde Valley 6-3, followed by a 12-4 loss to Nevada 5A program Faith Lutheran.

Falling to 4A Cimarron-Memorial 4-2 on Tuesday, March 8, Carver batted 3 for 4 with an RBI, and freshman Baylee Cooks batted 2 for 4.

The Lady Eagles will resume play Tuesday, March 15, with a home game against 3A Clark.