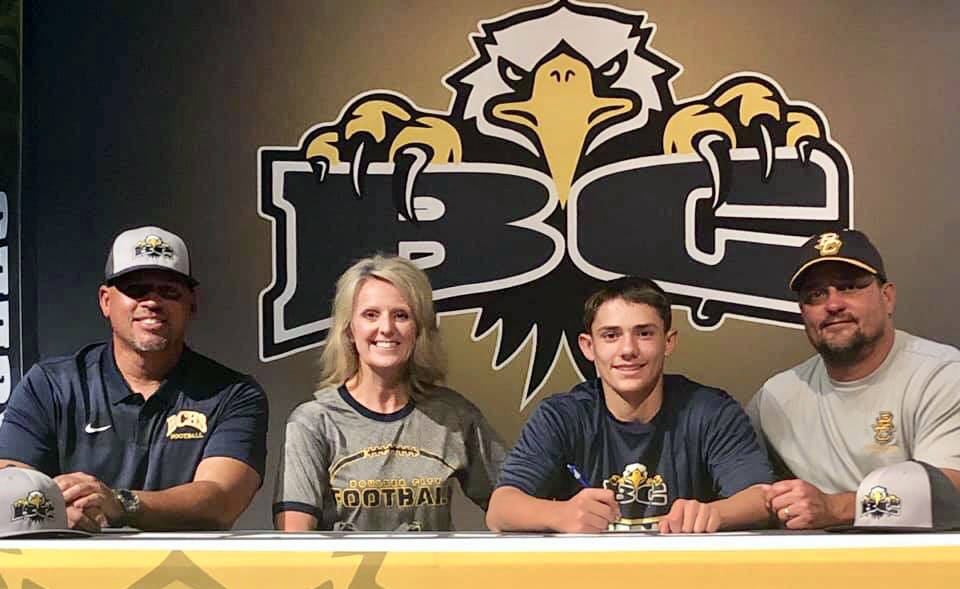 (Andrea Moore) Hunter Moore, second from right, signs his letter of intent to join Boulder City High School's Eagles football program during a special event to encourage eighth-graders to join the team held Tuesday, May 7, 2019, in the school's theater. Joining him for the ceremony are, from left, football coach Chris Morelli, his mom Andrea Moore and football assistant coach and dad Alex Moore.

Hosting the regional event, the Eagles finished with an overall team score of 651, edging out rival Pahrump Valley (709).

Tying with Western’s Jared Smith, sophomore Blake Schaper placed first with a score of 147, shooting a 71 on day two on the par-72 course after shooting a 76 on day one.

Senior Kevin Phelps rounded out the Eagles’ effort with an eighth-place finishing, shooting 171 over the two-day event.

Looking to repeat as 3A state champions, the Eagles will travel to Genoa Lakes in Genoa, Nevada, on Monday, May 13, for a two-day state tournament event.

Competing in the Grant Bushman Invitational at Moapa Valley High School on Saturday, May 4, Boulder City High School’s girls track team finished seventh out of 14 programs, while the boys finished 16th out of 20 programs.

Also finishing near the top of the pack, sophomore Sophie Dickerman finished second in the 3200-meter run and seventh in the 1600-meter run. Sophomore Chloe Payne finished sixth in the 300-meter hurdles and triple jump.

For the boys, sophomore Sonny Peck finished fifth in the pole vault and eighth in the 110-meter hurdle. Sophomore Sean White finished seventh in the 1600-meter run.

Traveling back to Moapa Valley High School this Friday, May 10, both Eagles program will compete in the 3A Southern Region meet.

Defeating Western 3-0 on May 1 and 4A Eldorado 3-0 on May 2, the Eagles locked up the third seed in the 3A Sunrise League for the playoffs.

The Eagles will play Chaparral at 5 tonight at host Mojave High School.

Looking to continue its retooling of the football program, 23 eighth-graders packed the theater at Boulder City High School on Tuesday, May 7, for its second annual eighth-grade signing day.

Head coach Chris Morelli, who stated from day one that he wanted to rebuild the lower levels of the Eagles’ program, called the event a success.

“This is our second year doing it and the numbers have grown from last year,” he said. “It’s an opportunity for these kids to see what the program is all about. We’re trying to get them excited about what’s in their future for the next four years.”

Helping turn the Eagles around in year four of his coaching tenure at the varsity level, Morelli said he sensed a new vibe around the program after making the postseason for the first time since 2014.

Finishing with a 7-4 record this past season, the Eagles were rewarded for their long rebuilding process, after finishing 5-22 in Morelli’s first three season.

“There is a different vibe right now surrounding Boulder City High School football,” Morelli said. “Obviously, that’s contributed to the success of this past season and what we were able to accomplish. … Kids want to be here.”

The Eagles have reached new heights under Morelli but aren’t content with just moderate success. Looking to build the Eagles into a stable program for the long haul at all three level of football (freshman, junior varsity and varsity), Morelli said he is happy with the progress but knows his work is far from finished.

“We started with a plan of wanting to build up this program organically and we’re not deviating from that path,” Morelli said. “We’ve seen a lot of improvements and things are working right now. We’re excited to keep building and heading in the right direction.”