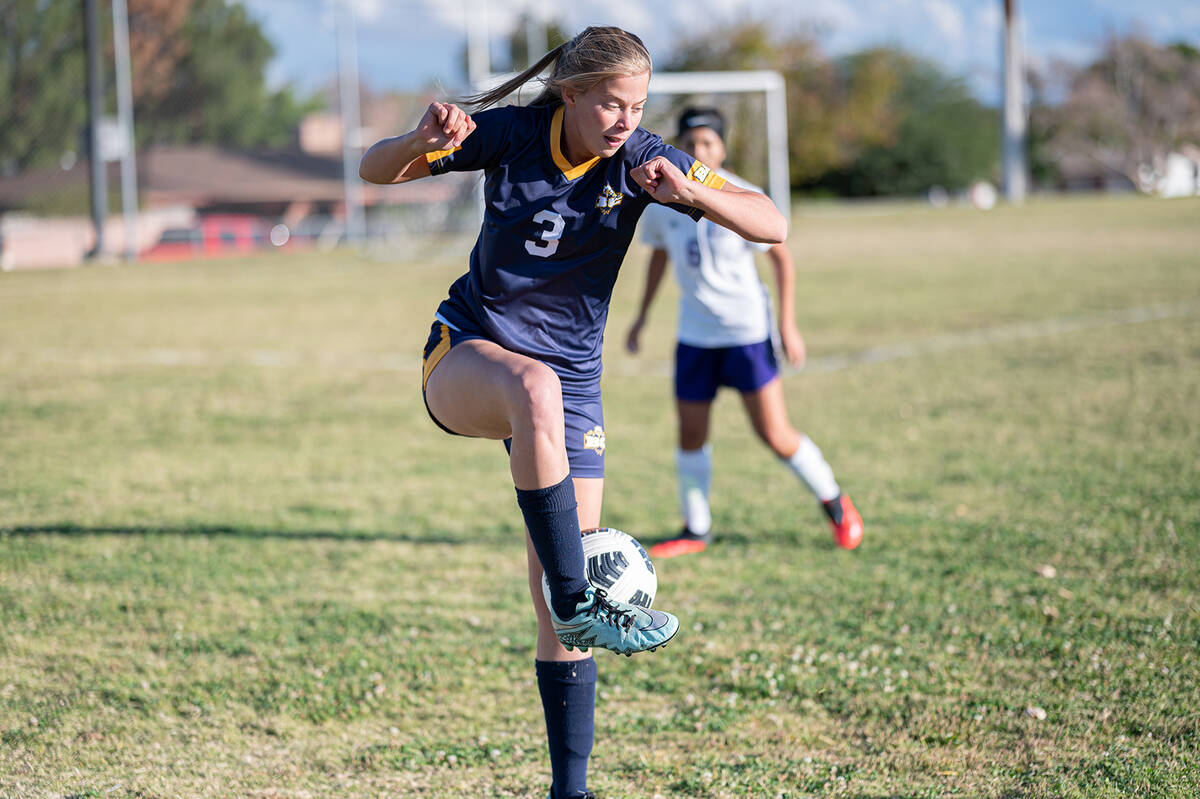 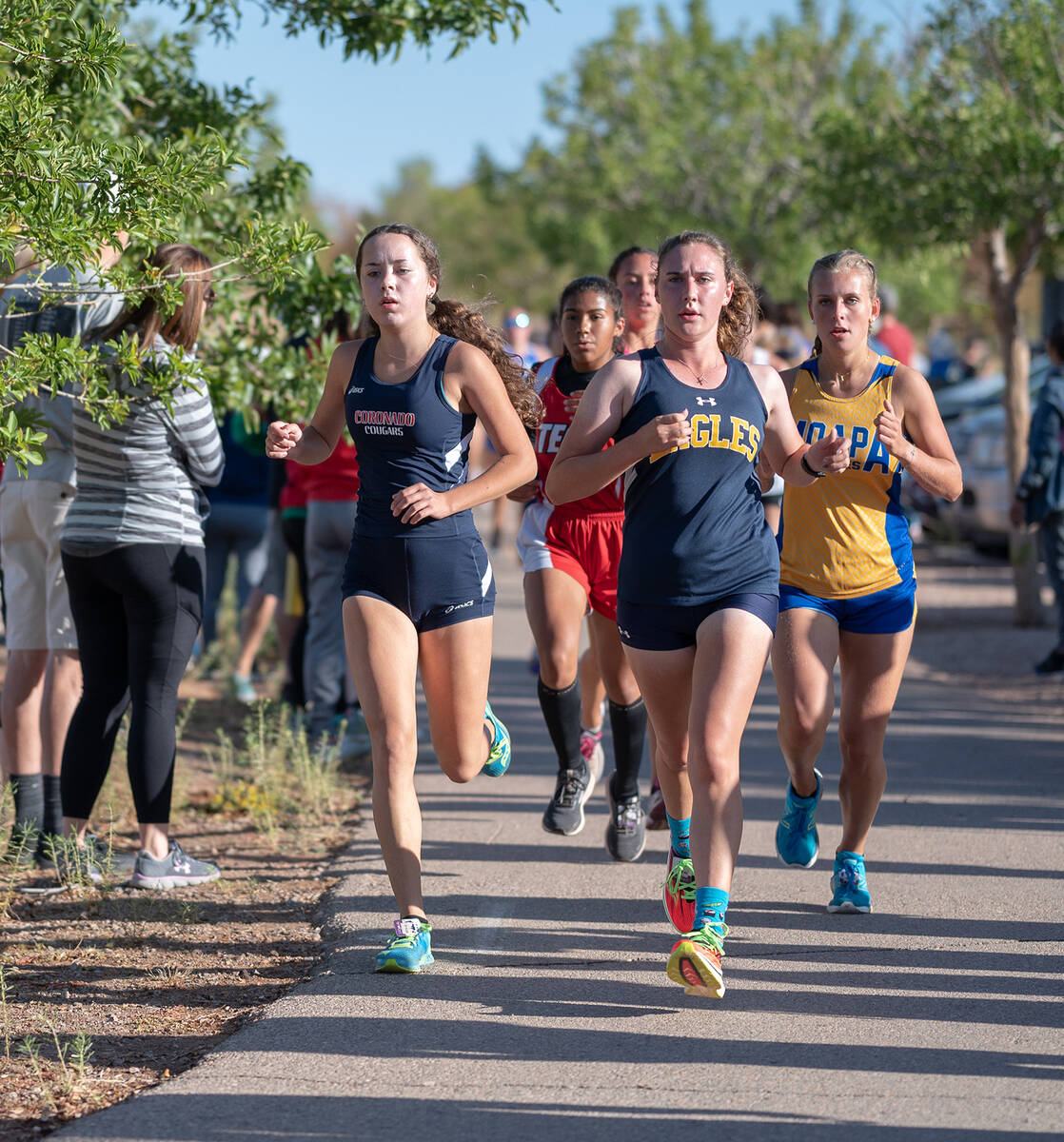 (Jamie Jane/Boulder City Review) Senior Mary Henderson, at front right, finished second out of 29 competitors in the Lake Mead Preregionals at Veterans’ Memorial Park on Saturday, Oct. 9. She will head into regionals this year as a favorite to win. 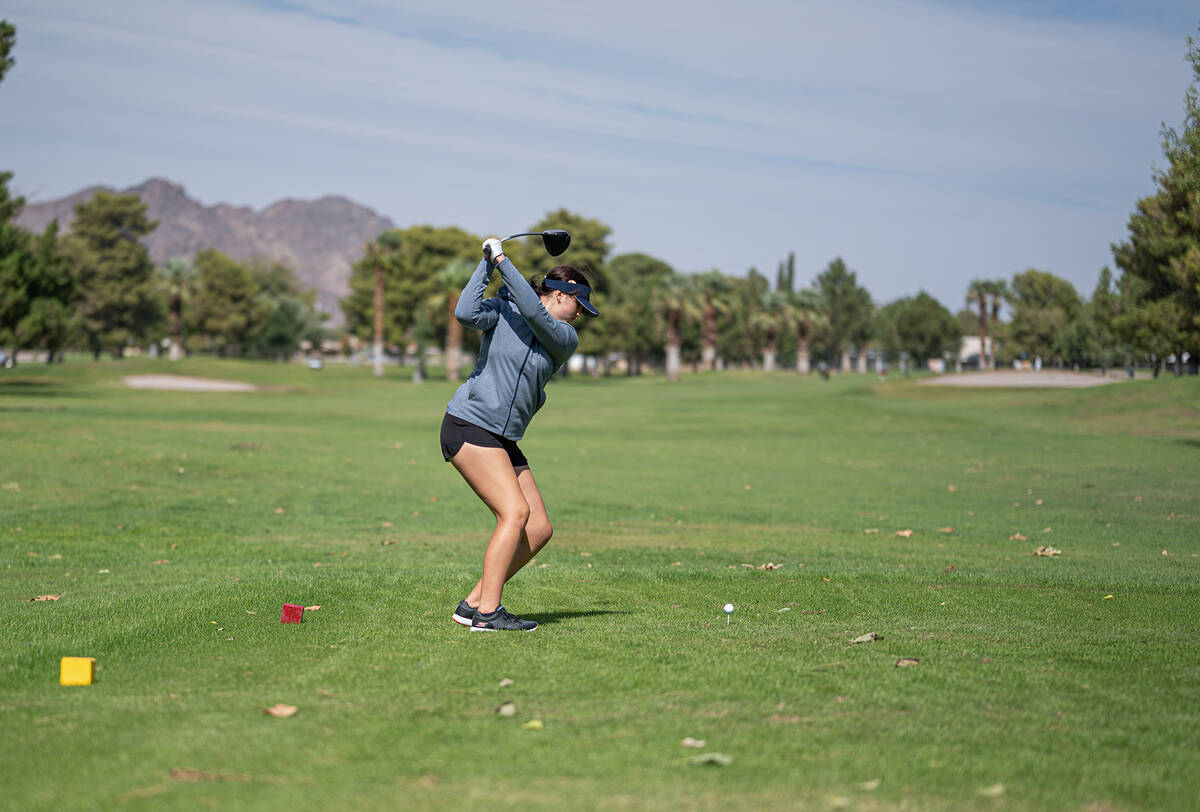 (Jamie Jane/Boulder City Review) Ruby Hood of Boulder City High School, seen Monday, Oct. 11, at Boulder City Golf Course, finished the 3A southern regionals with a 246, putting her in 18th out of 21 golfers.

Defeating Equipo Academy 6-1, Leavitt, Oeland, Gibson and Nelson each scored one goal with an assist. Juniors Ava Payne and Miranda Williams each added a goal.

Against Durango, Leavitt scored a pair of goals, while Williams and Gibson added a goal each.

Looking to build upon their winning streak, the Eagles will host SLAM Academy today, Oct. 14, before traveling to Pahrump Valley on Monday, Oct. 18.

For the boys, who tied with Somerset Academy Sky Pointe 0-0 on Oct. 7, they host SLAM Academy on Friday, Oct. 15, followed by a home game against Equipo Academy on Tuesday, Oct. 19.

Junior Camryn Schaper led the way for the Lady Eagles, finishing second with a score of 175, just one stroke behind Eldorado’s Zariyah Bell-Kane.

Closing out their season, the Lady Eagles will compete in the 3A state championships Monday and Tuesday, Oct. 18-19, at the Canyons Course at Oasis Golf Club and Palms Golf Club in Mesquite.

Trailing 21-0 at halftime, the Eagles made it interesting in the third quarter, scoring 13 unanswered points before running out of gas in the fourth quarter.

Carrying the load for the Eagles was junior Hunter Moore, who rushed for 132 yards and two touchdowns on 23 carries. Sophomore Jacob Bryant completed 9 of 14 for 96 yards.

Looking to snap a two-game losing streak, the Eagles will host Cadence on Friday, Oct. 15, for senior night, with hopes of gaining momentum heading into the postseason.

Henderson set a new school record for the fastest time in a 3-mile event Oct. 2 as she nears the end of her cross-country career at BCHS. Competing in the Patriots Invitational, Henderson won the event with a time of 19:21.4, besting previous record holder Jessica Tobler (19:27.0), who set the record in 2012.

Henderson has finished inside the top 11 in all nine of her races, including six top four finishes and a pair of victories. She’ll head into regionals as one of the favorites.

Traveling to Canyon Springs on Saturday, the Eagles will compete in the Southern Nevada Track Cross Country Coaches Association Invitational.