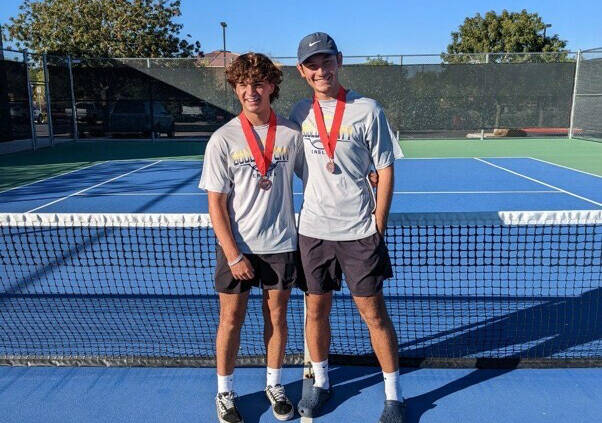 For the boys, the doubles duo of seniors Tyler Lemmel and Ike Pappas will represent Southern Nevada as the No. 2 seed, after finishing second at regionals.

For the girls, the doubles duo of junior Julia Carmichael and sophomore Chayce Larson will represent Southern Nevada as the No. 4 seed, along with junior singles competitor Lilllian Mikkelson.

Making their way to the championship match at regionals, Lemmel and Pappas fell to The Meadows’ duo of Phillippe Kosyagin and Alberto Pereira 6-3, 6-3.

Routing Del Sol, sophomore Makayla Nelson recorded a three-goal hat trick with three assists on the day. It was her sixth hat trick of the season.

Tying with Durango 2-2, Nelson and Williams each scored a goal.

Looking to make a playoff push, results from the Lady Eagles’ Wednesday home game against SLAM Academy will appear in next week’s issue.

Playing in a pair of hard-fought matches, Boulder City High School’s boys soccer team won a game and dropped another to advance to 9-10-1 on the season.

Hanging tough with SLAM Academy on Oct. 25 in a 5-4 loss, Rose recorded a three-goal hat trick, while Kessler added a goal.

Finishing with an overall score of 158, Schaper fell just short of Douglas winner Giana Zinke, who shot 156 over the two-day event.

The team finished with a score of 860 points.

Senior Rylee Landerman finished 20th with a score of 207, and senior Ellie Speaker shot a 237 to finish 28th.

Kaitlynn Trobiani finished 32nd with a score of 258.