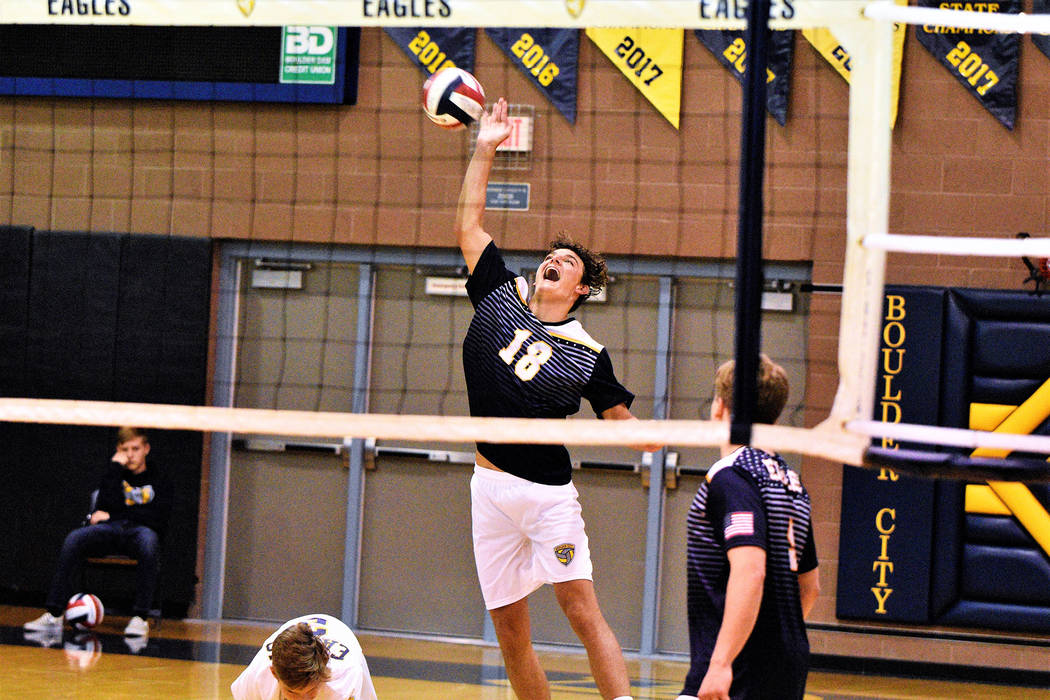 (Robert Vendettoli/Boulder City Review) Boulder City High School junior Preston Jorgensen, seen going up for a kill against Valley on April 29, had a team-leading 25 kills during the Eagles' state semifinals appearance against Mojave on Tuesday, May 14. The Eagles lost 3-1.

Boulder City High School boys golf team came up a bit short and finished second in the 3A state meet at Genoa Lakes Golf Course on Tuesday, May 14.

Entering as the defending 3A state champion, the Eagles held the lead after day one with a score of 310, before a rough day two score of 329 placed them as the runner-up with an overall 639.

Finishing as the individual champion runner-up, sophomore Blake Schaper led the way with a score of 144, finishing just behind champion Jared Smith (138) from Western.

Playing well on the par-72 course, Schaper shot a 69 on day one and a 75 on day two. Sophomore Kyle Carducci finished seventh with a score of 160.

Rounding out the Eagles’ efforts were senior Kevin Phelps and junior Dustin Landerman, who tied for 14th with scores of 168.

Unable to make a return trip to the 3A state tournament for a seventh time this decade, Boulder City High School’s softball team was bounced out of the postseason by Mojave on May 9.

Playing in the losers bracket, Mojave stormed back from a 6-1 deficit to defeat the Lady Eagles in extra innings 13-9.

Mojave scored six runs in the fifth innings and two runs in the sixth inning before closing the game out with an unmatched four runs in the eighth inning.

Doing her part offensively despite the loss, senior Ryann Reese batted 2 for 5 with three runs batted in and a double, while junior Ellie Ramsey batted 2 for 4 with an RBI.

Losing to Pahrump Valley 9-5 on May 8, Reese batted 2 for 3 with a double, while Giunta was charged the loss.

The Lady Eagles placed seventh out of 12 programs at Moapa Valley on Friday, May 10.

Just missing out on a state berth for the boys, who finished in 11th place, sophomore Sonny Peck finished in fifth place in the pole vault (10-6) and 110 meter hurdles (17.81). Rafe Echeverria placed fifth in the shot put with a personal best throw of 40-10.

Prepping for state, the Class 3A meet will be held at Desert Oasis on Friday and Saturday, May 17 and 18.

A magical season came to an end for Boulder City High School’s boys volleyball team, which fell to Mojave 3-1 on Tuesday, May 14, in the 3A state semifinals.

Defeating Chaparral 3-0 in the opening round of the state tournament on May 9, Bailey had 13 kills, while Jorgensen had 11. Huxford led the way with 16 assists.