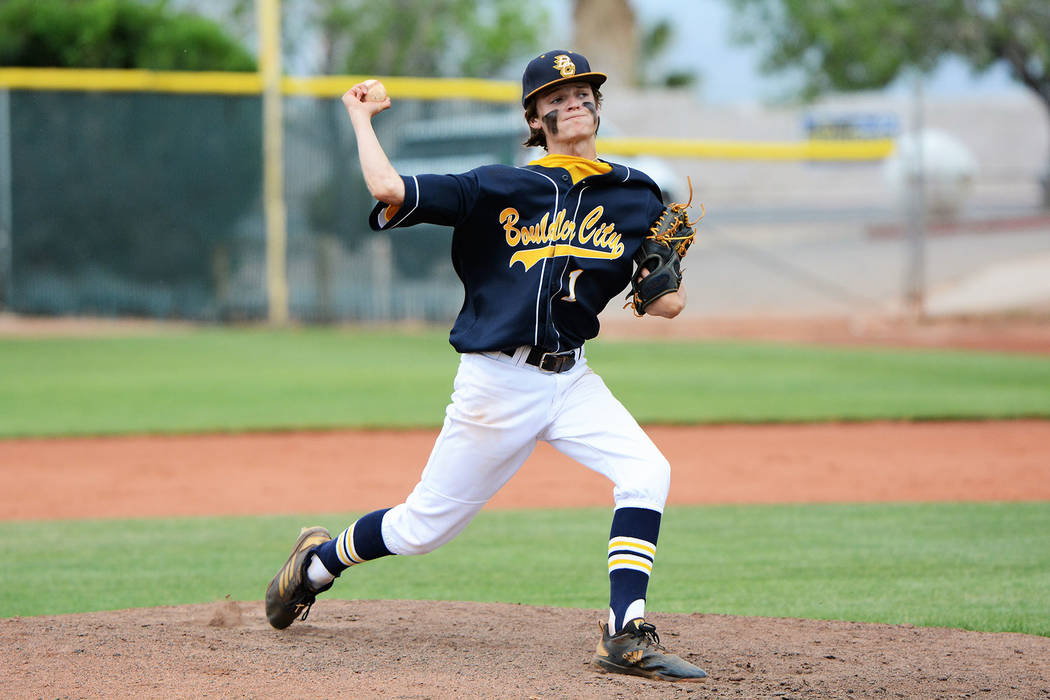 (Robert Vendettoli/Boulder City Review) Boulder City High School sophomore Troy Connell, seen throwing a strike down the middle to earn a win against Mojave on May 7, threw the first 5 1/3 innings against Churchill County in the Eagles' opening-round win of the 3A state championships on May 16.

A strong season came to an end sooner than expected for Boulder City High School baseball, but coach Ed McCann sees a bright future ahead for his program.

“Obviously, we would have liked to win a state championship this year and I feel like we should have won a state championship this year, but it wasn’t in the cards,” he said. “I believe we were the best team there, but baseball is a long season and we didn’t play well enough when we needed to. This team was mostly made up of sophomores and they didn’t like the feeling of losing. We’ll use that to motivate us next season.”

Defeating Northern challenger Churchill County 5-4 in their opening-round matchup on May 16, the Eagles ended their season with loses to eventual state champion Truckee 3-1 and Churchill County 6-5 on Friday, May 17.

“We had a good run, but we ran out of gas,” McCann said. “We played from behind a lot this season and you can only be the comeback kids for so long. We’ll learn from this experience and be better because of it.”

Excelling in the Eagles’ win over Churchill County, seniors Jimmy Dunagan (2 for 3) and Brendan Thorpe (1 for 4) each drove in a pair of runs, while Blaze Trumble picked up the win on the mound, throwing 1 2/3 innings of relief.

Against Truckee, Dunagan batted 1 for 3 with an RBI, while Troy Connell (2 for 4) drove in three runs and Trumble (1 for 2) drove in two runs.

Coming up short in their attempt to regain dominance in the 3A classification, Boulder City High School’s boys swim team finished as the state runner-up for the second season in a row Saturday, May 18, at the Carson Aquatic Center.

Falling to Northern challenger and defending state champions Truckee (135), the Eagles finished with a total team score of 127 points.

In the 200 freestyle relay, the team of Pouch, seniors Elias Woodbury and Chandler Larson and junior Ladd Cox placed first (1:34.31), while the quartet of Pouch, junior Joseph Purdy, sophomore Ethan Porter and freshman Martin Thompson won the 400 freestyle relay in 3:19.30.

Competing in the 3A state meet at Desert Oasis, senior Geri Wachtel ended her tenure with the Lady Eagles with a fifth-place finish out of nine competitors in the triple jump (30-0.25).

Also placing fifth at state out of eight teams, with a time of with a time of 10:48.28, was the 4×800 relay team of junior Keely Alexander, sophomores Chloe Payne and Sophie Dickerman and freshman Mary Henderson.

Gaining state meet experience to build on for the future, sophomore Christina Dunagan placed seventh out of eight in the pole vault (7-0). Henderson placed eighth in the 3200-meter run (12:57.60).