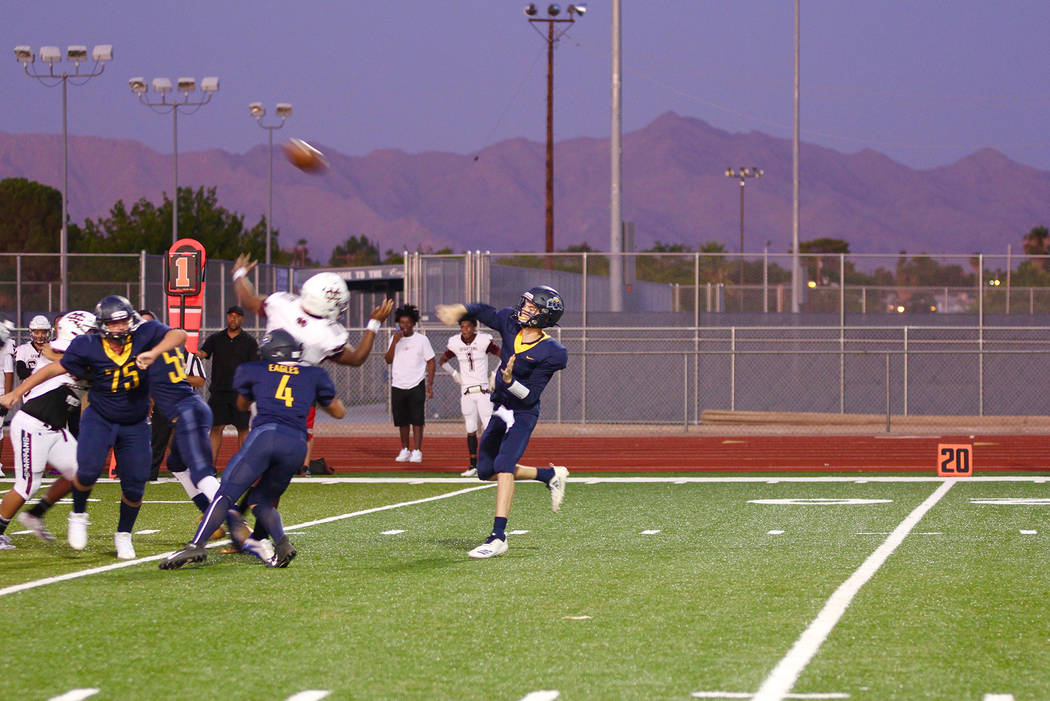 Boulder City High School’s varsity football team fell to 4A Cimarron-Memorial 31-19 in its season opener Friday, Aug. 23, but gained a potential star in the process.

Senior quarterback Parker Reynolds completed 8 of 20 passes for 69 yards and a touchdown, while also throwing an interception.

Dynamic through the air-on offense, the Eagles will need to improve their defense that allowed Cimarron running back Jordan Norwood to rush for 241 yards and two touchdowns.

They’ll get their chance tonight at Cheyenne.

Competing in the Red Rock Running Company Invitational athletes from Boulder City High School boys and girls cross-country teams held their own against top 4A competition.

Boulder City will travel to Palo Verde on Saturday, Aug. 31, for the 4A-laden Palo Verde Labor Day Classic as it continues its preseason meets.

Leading the way for the Lady Eagles, senior Sydney Krumm placed first with a score of 80, continuing to show her prowess after a solid junior campaign.

Adding a new player to the mix, freshman Camryn Schaper shot a 102. Senior Makaela Perkins shot a 103; senior Paige Rudd rounded out the effort with a score of 112.

Opening the regular season with a 5-1 victory over 4A Eldorado on Friday, Aug. 23, the Lady Eagles took their talents to the Las Vegas Kick-Off, where they split their first two games.

Falling 4-1 to Western on Monday, Aug. 26, the Lady Eagles rebounded with a 3-1 victory over Somerset Academy Sky Pointe on Tuesday, Aug. 27.

Scoring a goal each against Sky Pointe were senior Trinity Oeland and juniors Kiara Krasner and Acacia Williams.

A recap of the team’s Wednesday, Aug. 28, and Thursday’s, Aug. 29, games in Las Vegas Kick-Off will appear in next week’s issue. The Lady Eagles will also travel to 4A Basic on Tuesday, Sept. 3.

The boys cruised to a 12-6 victory against Foothill on Aug. 22, while the girls tied with the Falcons 9-9.

For the Lady Eagles, Kryshchuk and Pappas finished 3-0 in doubles; Fox and sophomore Reggi Gibbs finished 3-0.

Back in action today, Boulder City will travel to The Meadows, followed by home matchups against Liberty on Tuesday, Sept. 3, and Western on Wednesday, Sept. 4.