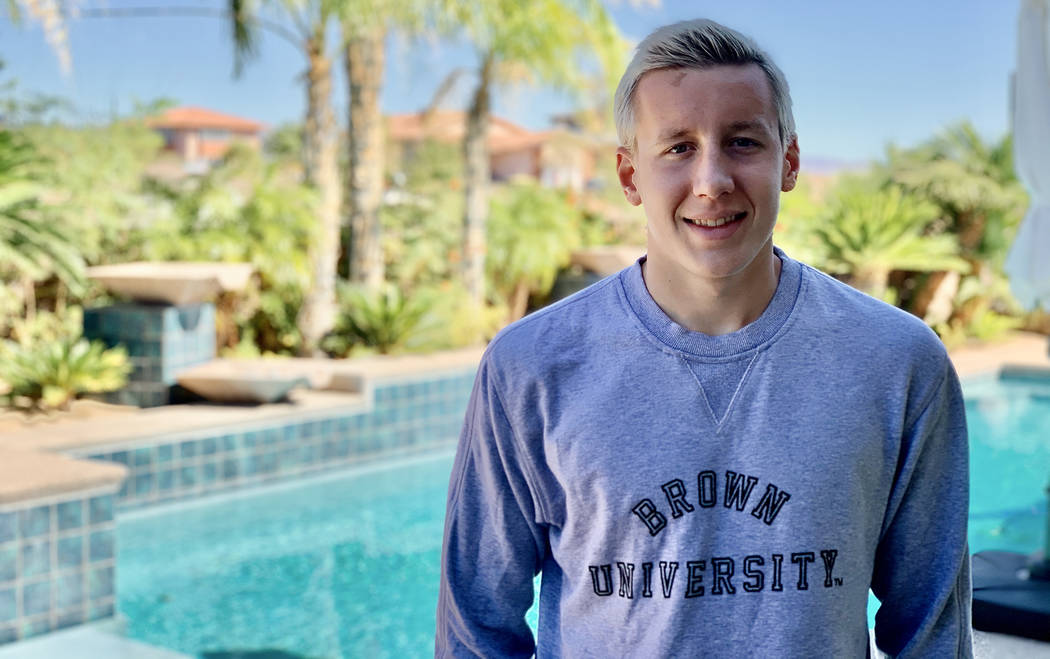 Boulder City Henderson Heatwave swimmer Mason Romantic is the latest homegrown athlete to move on to the collegiate ranks, verbally committing to Brown University for 2020-21.

Swimming since the age of 9 at the Boulder City Pool, Romantic will now take his talents to Providence, Rhode Island, where he’ll call the Katherine Moran Coleman Aquatics Center home for the next four years.

“This has been a dream of mine since I started swimming,” said the Boulder City resident. “I have always looked up to the older kids that went off to college to swim. Swimming in the Ivy League was my ultimate goal and I feel honored to have this opportunity.”

Praising the Ivy League for its high academic reputation, Romantic, who was named a USA Swimming Scholastic All-American from Green Valley High School, said he is excited to swim under new head coach Kevin Norman.

He’s on pace to graduate with 4.8 GPA and an advanced honors degree.

“Brown has an excellent academic reputation and an amazing team,” Romantic said. “I knew immediately when I met with coach Norman that this is where I wanted to be.”

Blossoming as a swimmer during his nine years in the Heatwave program, Romantic has grown exponentially throughout the years under the tutelage of coaches Jan Bunch and Mike Polk.

“Coach Bunch was my first swim coach and always in my corner,” Romantic said. “She really made me love swimming. Coach Polk has taught me so much about swimming and, by example, how to be a humble and gracious competitor. He’s very steady and consistent and I truly admire and respect him. Mike has helped me reach my goals and I’m very thankful.”

“Mason is a very hard working young man. He started off on the Boulder City Henderson swim team working with coach Jan Bunch as an average beginning level swimmer struggling with breathing issues. It looked like swimming would be good for his health but nothing immediately indicated that he would really excel. Coach Jan caught his imagination and Mason worked his way to the top of the local competition and then into success at the regional and national levels of the sport,” Polk said.

“Mason has the ability to commit to pushing his body through challenging training sets on a regular basis and has the parental support to live a lifestyle that allows him to do it over a long term. This is crucial for success in his sport,” he added.

A distance freestyle swimmer, Romantic said he looked up to former Heatwave swimmers and current Olympic hopeful Zane Grothe when he was younger. Swimming within a prestigious club organization, Romantic has used past swimmers’ success as motivation to fuel his own desires.

“It’s so exciting to see someone from the Heatwave team do well after high school,” Romantic said. “I really looked up to all of those guys and girls who were older when I first started. Quite a few of them went on to swim in college and did very well.”

“I think Mason’s choice of Brown University is a great choice and that he is set up for great success there. The level of competition in the Ivy League is perfect for Mason and the academic level is all that you could ask for.”

Carving out his own path for future success, Romantic won the 1500-meter freestyle (16:12.89) at the California Speedo Sectionals in Santa Clarita on July 18. He’ll now compete in the Junior Nationals in Seattle, Washington, from Dec. 12-15.

“I’m very excited to attend nationals in Seattle next month,” Romantic said. “I’m excited to swim against some of the toughest competition 18 and under.”

A captain this year for the Gators, Romantic said he has high aspirations before he departs for college.

“I’m excited to be a team captain this year,” he said. “I’m focused on training hard and hopefully breaking the school record in the 500 freestyle at state.”