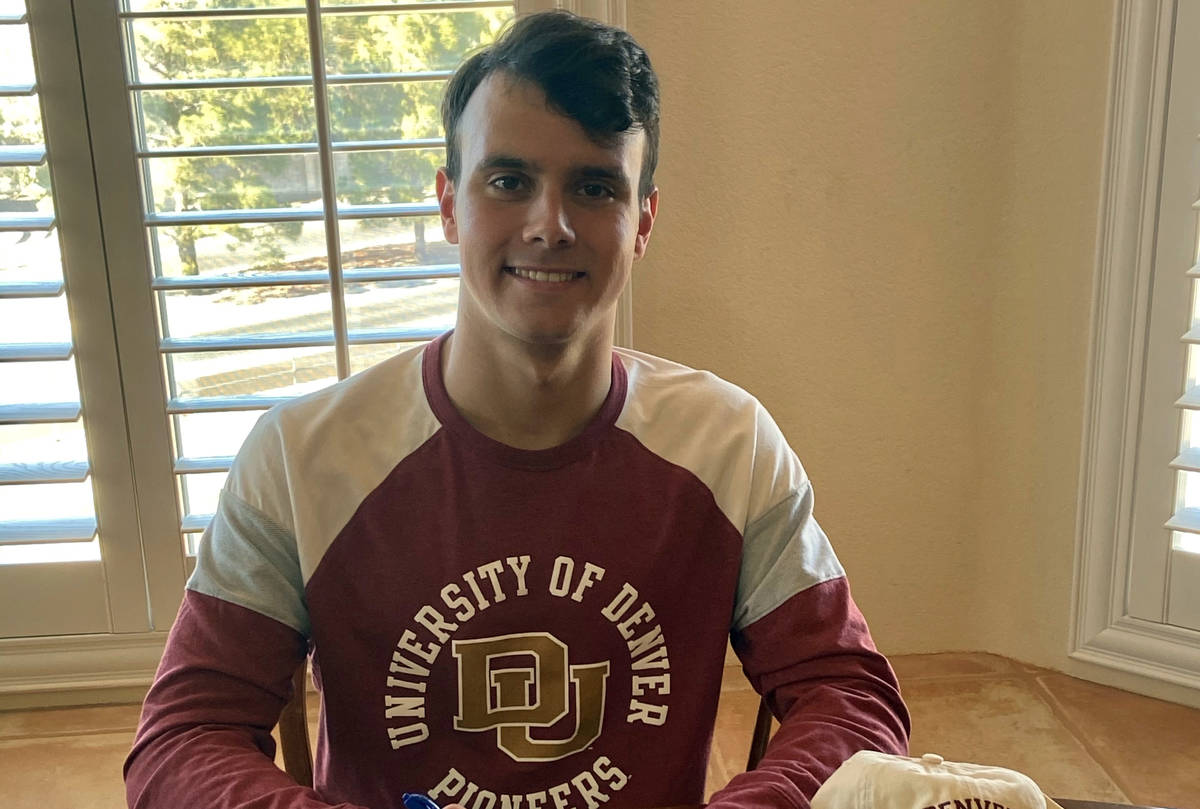 (Joan Purdy) Senior Joey Purdy signs his national letter of intent to swim for the University of Denver on Nov. 11. 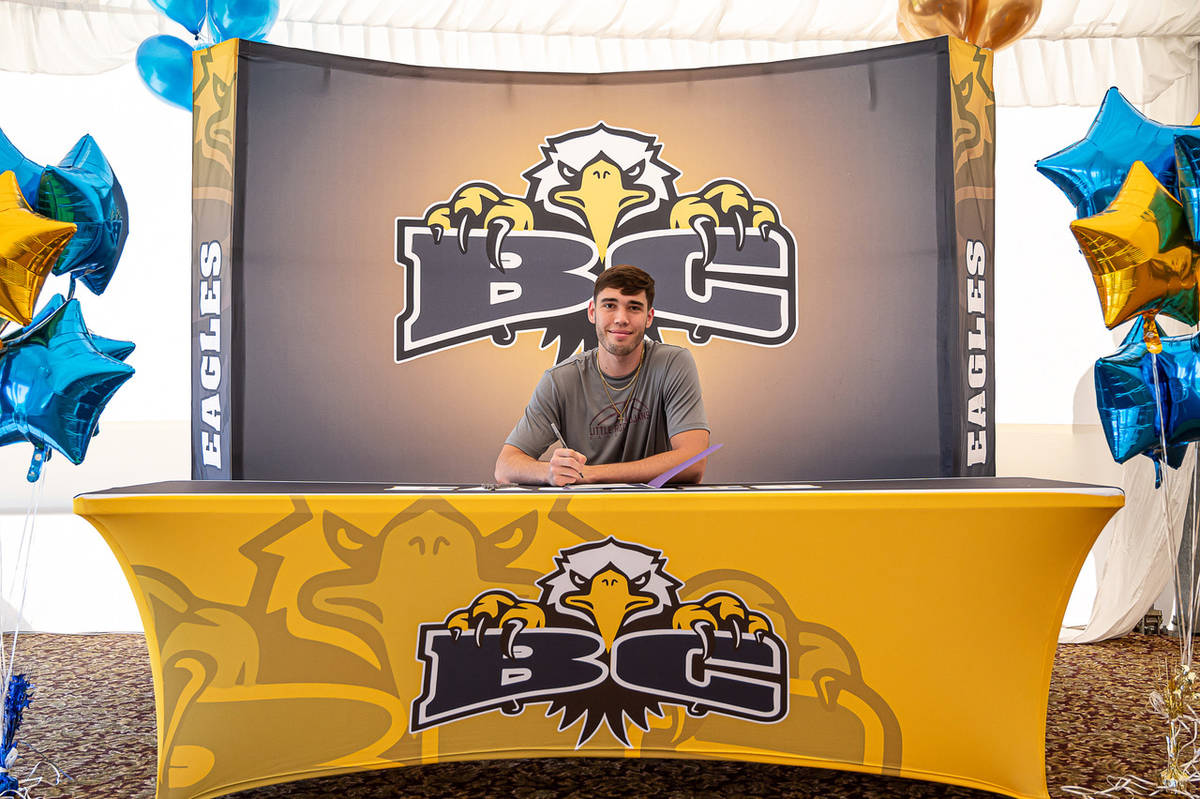 (Jamie Jane/Boulder City Review) Ethan Speaker, a senior at Boulder City High School, signed his letter of intent to play basketball for Division I University of Arkansas at Little Rock during a ceremony Nov. 11 at Boulder Creek Golf Club. 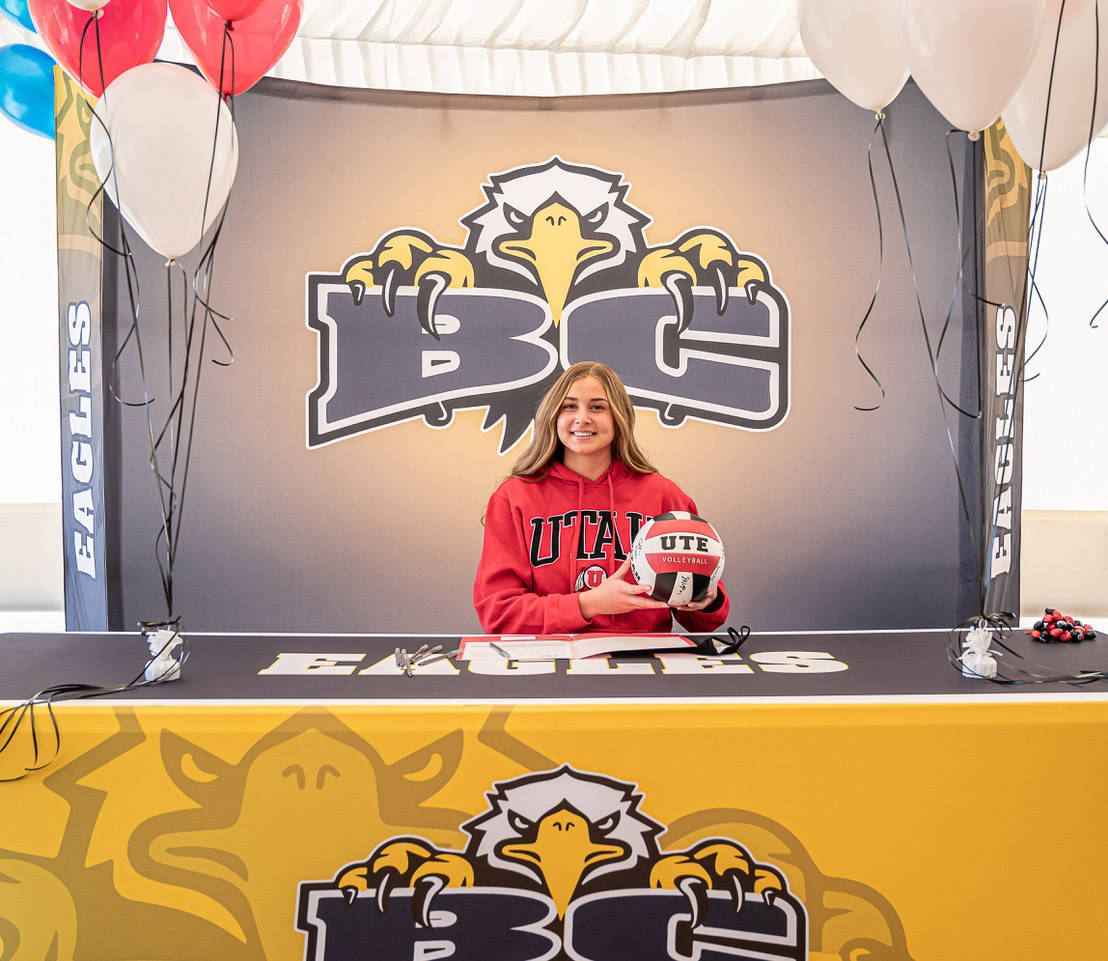 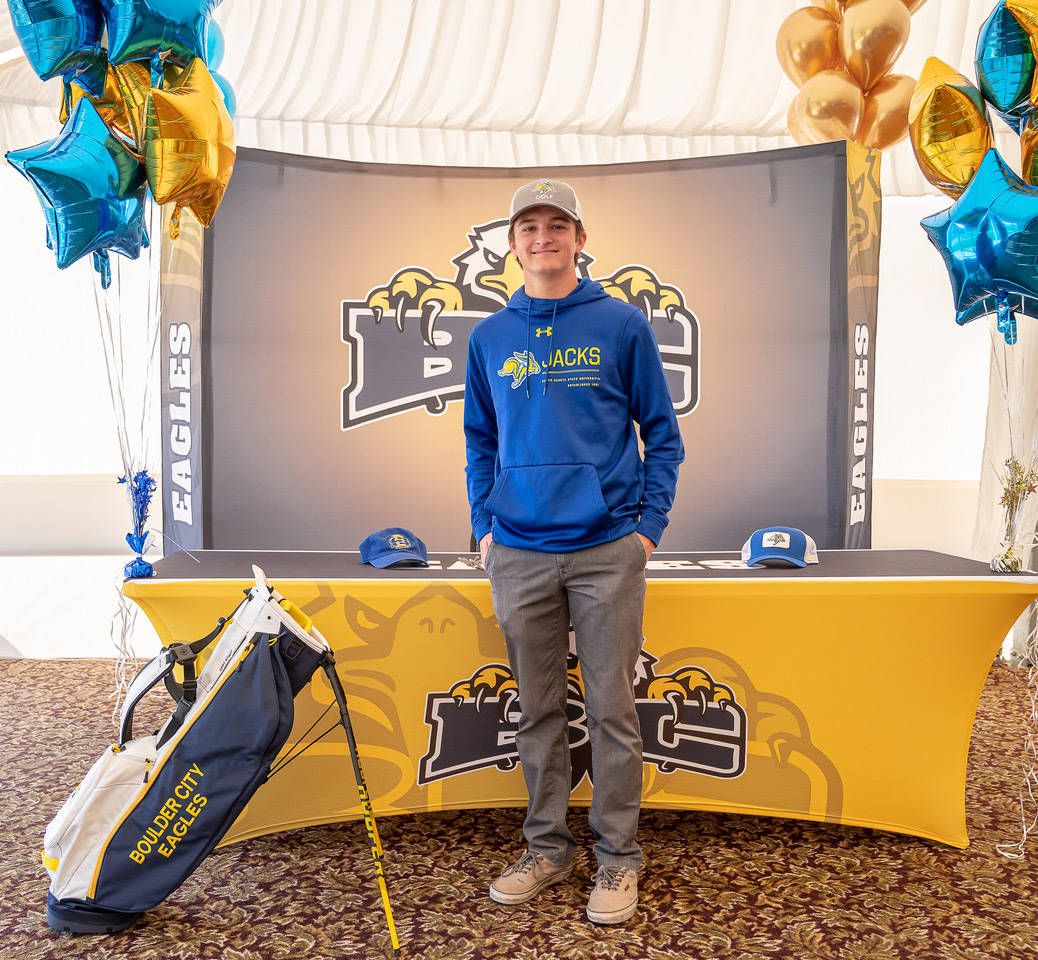 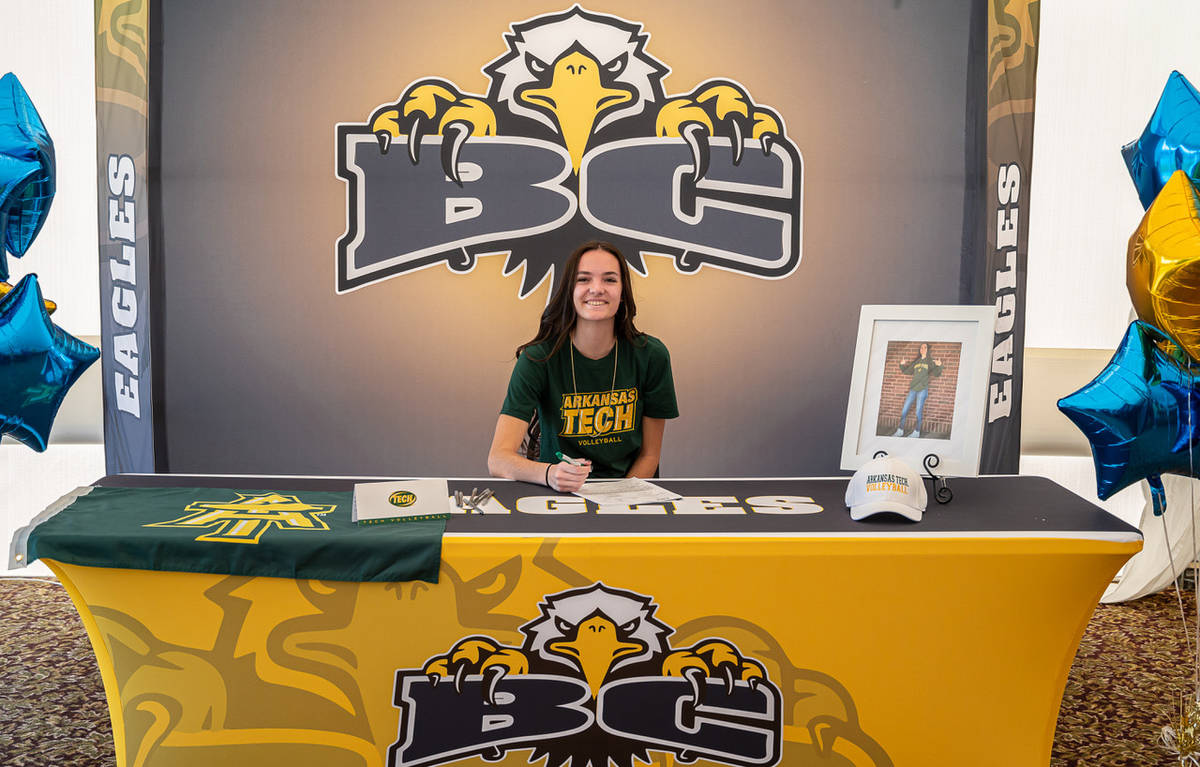 (Jamie Jane/Boulder City Review) Sierra Orton, a senior at Boulder City High School, is headed to Division II school Arkansas Tech University, where she will play volleyball, after signing her letter of intent during a ceremony Nov. 11 at Boulder Creek Golf Club. 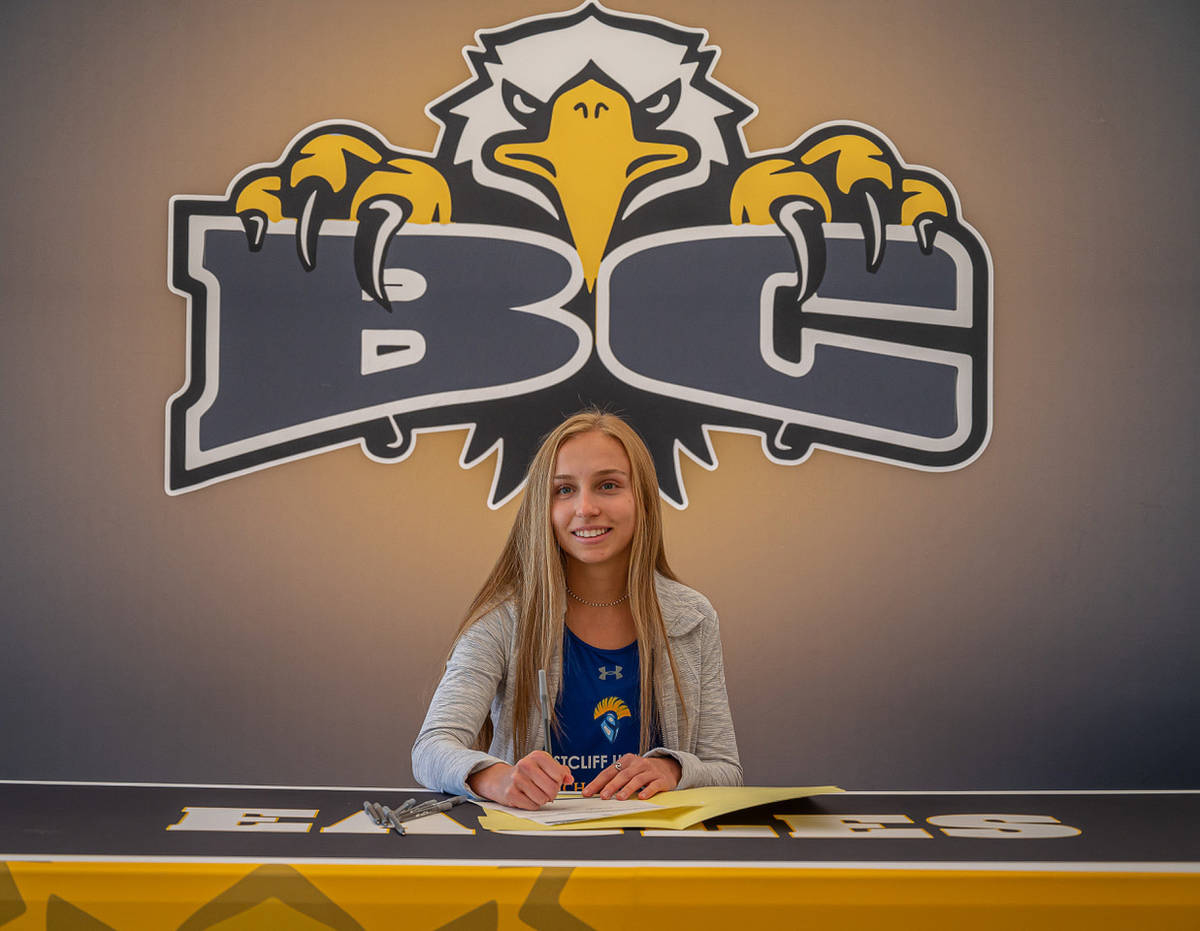 “Denver was the perfect place for me because I really wanted a good academic school with the chance to swim on the Division I level,” Purdy said. “I really liked the surrounding area of the campus, it was close to Denver but not directly in the city. It was a beautiful place and felt like the place for me.”

As part of national signing day, Purdy was one of six Eagle athletes who signed their national letter of intent with universities.

In addition to his time on Boulder City High School’s team, Purdy’s pedigree with local club team Boulder City Henderson Heatwave under the tutelage of Mike Polk has prepared him for this moment.

Rated the No. 3 swimmer in the state of Nevada by Swimcloud.com and No. 315 for the entire class of 2021 swimmers, Purdy said he is looking forward to the opportunity of competing on the Division I level.

“Coach Mike has really set up a good program over the past years that gets swimmers to progress,” Purdy said. “As you grow up through the program, the workload he gives you gradually gets harder and prepares you for the Division I level. I feel like I’m ready for this opportunity and looking forward to swimming against other great swimmers.”

Swimming on a national level prior to the COVID-19 pandemic, Purdy finished fifth out of 58 competitors in the 1,000-meter freestyle at the Speedo Champions Series in Carlsbad, California, on Feb. 27.

A state champion with the Eagles, Purdy was part of the 400 freestyle relay team that placed first as a sophomore.

With future competition on the high school level uncertain due to the pandemic, Purdy said he is hopeful to compete for a state title one last time before he departs for Denver.

“It would mean a lot to me to get back in the pool for Boulder City,” Purdy said. “At the same time I understand the NIAA (Nevada Interscholastic Activities Association) is doing their best to try and keep both the athletes and their families safe. I really want to compete but whatever they decide is the best decision for their student athletes, I’ll be happy with.”

Looking for their own happy ending and hopeful state championship run, a trio of girls volleyball players, Kamry Bailey, Sierra Orton and Ava Wright, is looking to claim their fourth consecutive state championship now that their college commitments are out of the way.

“I’m just so happy for all of these girls,” head coach Kurt Bailey said. “They’ve all put in a tremendous amount of work and to see them fulfill their dreams is rewarding for me as a coach. They’ve all been playing for years and have been helped by several coaches and their parents. I’m glad we all get to share in this moment together.”