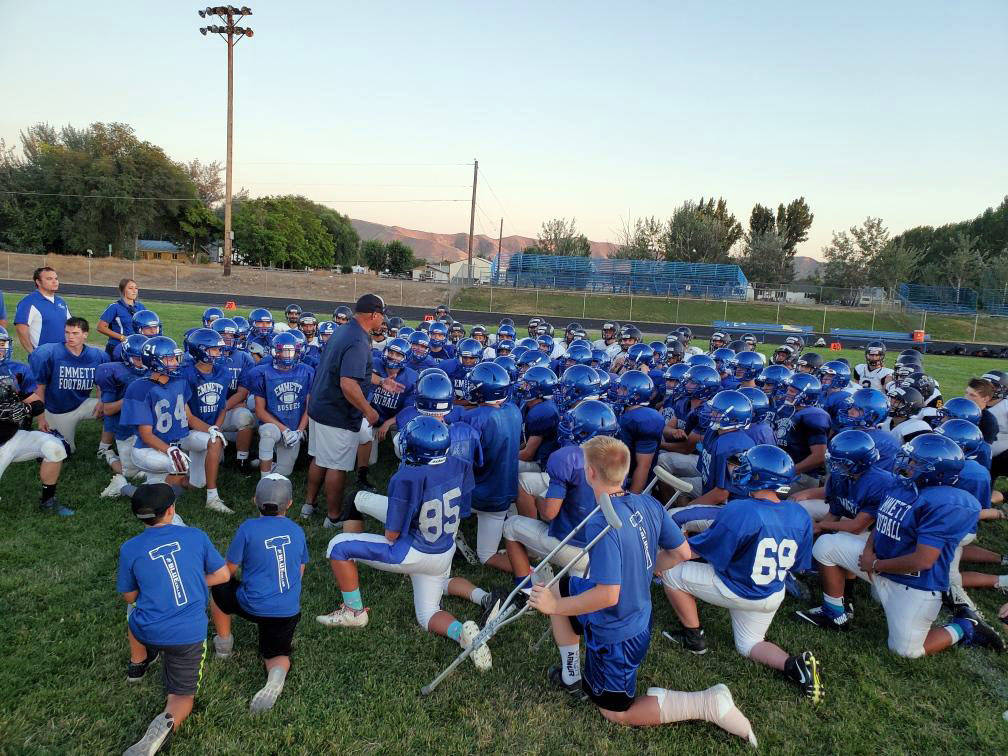 “This trip was definitely beneficial for us,” said Chris Morelli, head coach. “To get these kids out there in pads, turning them loose and letting them run around and hit someone other than their teammates, it was a positive experience. Even our younger guys got in the mix and learned proper technique to help them improve for the upcoming season.”

Sharing the camp experience with host Emmett High School and Ontario High School from Oregon, the Eagles ran through skill position drills taught by a trio of coaches, getting the chance to compete in a friendly and competitive environment.

“The experience going to Idaho was amazing,” said Parker Reynolds, senior. “Meeting the Emmett coaching staff and players and being able to learn from them was amazing. Also off the field we got to make great friends with all of the Emmett guys.”

Culminating the camp with a live scrimmage the Eagles worked through their base offense and game-like simulations, getting a first-hand look at what this year’s team could look like.

“I feel we did pretty well against Emmett,” senior Cade Cowley said. “We were without quite a few of our contributors on both sides of the ball which made it somewhat difficult when it came down to red zone situations. I feel that although we lost we were controlling the tempo and the majority of the game until we got into red zone situations.”

Because it was a full contact camp, Morelli said he feels this experience has helped the Eagles prepare for their season opener against 4A Cimarron-Memorial Aug. 23.

“Scheduling this scrimmage gave us a head start,” Morelli said. “Our guys haven’t hit or been hit in nine months but they got right after it and stuck their nose in it. Parker being center got hit a little which was important. Mostly this just helps get the jitters out. It’s different when you’re facing other teams. The atmosphere is different, it’s exciting. It was great to see all the kids excited to be there and play football again.”

Morelli also said he feels the team is on the right track, with just three weeks of summer practices remaining.

“Seeing this team scrimmage, there’s no doubt in my mind that we can’t pick up from where we left off last season,” he said. “It’s still early and we have some areas to clean up and improve upon, but I’m really impressed with where we are. We have a lot of new faces, guys that haven’t started before and got thrown into the fire over the weekend but everyone came out and responded great. We have the make up of a good team.”

Making life long friends as well as making an impact in the community, the Eagles players also participated in a community service project while away from the gridiron, helping paint storage sheds at the Gem County Fairgrounds with players from both Emmett and Ontario High School.

“The experience overall was tremendous,” Cowley said. “We were able to grow and bond as a team. Off the field, we participated in community service and got the chance to hang out with some of the Emmett guys which was a fun experience.”

The camp in Emmett was also about building friendships and team bonding for the upcoming season. Making sure a senior roomed with a freshman and a junior roomed with a sophomore, the camp brought camaraderie for the program.

“This camp was about coming together as a team,” Morelli said. “Not just with ourselves but with the Emmett guys as well. We were all a family out there. These guys can now come back home and keep track of Emmett’s season and see how they’re doing. Same goes for them.“