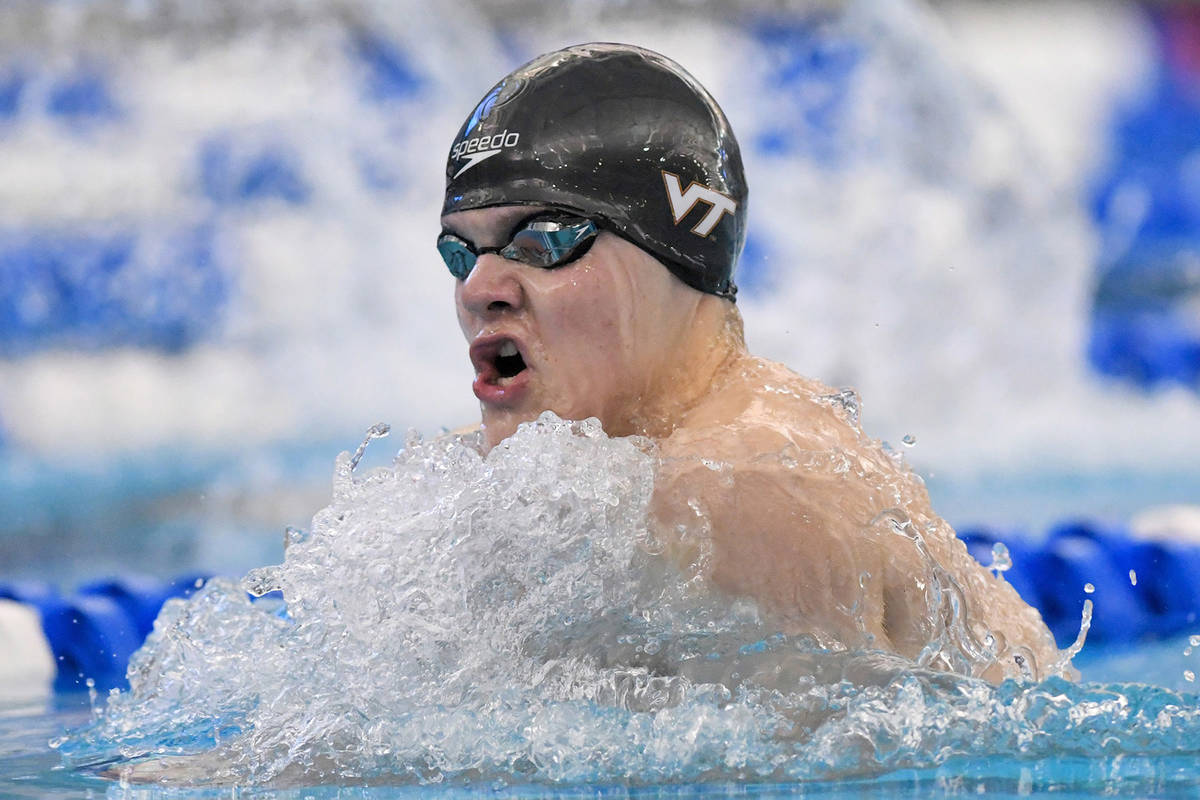 (Virginia Tech) AJ Pouch, seen swimming in the ACC’s swimming and diving championship in Greensboro, North Carolina, on Feb. 29, was named the rookie of the year at Virginia Tech. He is a 2019 graduate of Boulder City High School.

AJ Pouch, a 2019 graduate of Boulder City High School and swimming star, is making a splash on the collegiate level after being named the rookie of the year at Virginia Tech University.

“It feels great to be named rookie of the year,” Pouch said. “I was honestly super surprised to have won it. I remember thinking how cool it was to be nominated, but hearing them call my name out of the other three athletes really opened my eyes and shocked me. I didn’t think I was going to win it at all going into the banquet, but I definitely left with my head a little higher.”

“I know that this year’s group of freshman athletes were definitely some of the toughest and most hard-working group,” Pouch said. “We had great guys in every sport just doing what they do best and to be considered the top freshman really brought everything into a new perspective. I always try to go into a practice or a race with some confidence but having this behind me just adds fuel to that fire. I was extremely honored to be given that title.”

During his freshman campaign, Pouch was named a College Swimming and Diving Coaches Association of America All-American in the 200-meter breaststroke.

At the ACC Men’s Swimming and Diving Championships in Greensboro, North Carolina, on Feb. 29, Pouch placed third in the 200-meter breaststroke with a time of 1:53.69, the second-fastest time in the school’s history.

“Being named an All-American is an extremely big honor, especially as a freshman,” Pouch said. “I just wish I could’ve earned it like they did in previous years. Standing on a podium at NCAAs along with the best. Unfortunately, I was unable to do that due to NCAAs being canceled because of the pandemic. Having this title is a stepping stone into future seasons and something I can carry with me next season heading into NCAAs.”

Primed to be a regular at the NCAA championships during the next three seasons, Pouch’s freshman year with the Hokies was remarkable.

Recognizing his accomplishments, Pouch said he knows the future is brighter with the Hokies program. Preparing to train this summer, Pouch will no longer be the new kid on campus, but instead an accomplished veteran looking to improve on his success.

“I wouldn’t say my season was great, but it was definitely good,” Pouch said. “The transition from training back home to training with my team now was something I always held in the back of my mind. I’m always thinking am I working hard enough or am I doing enough, adding some unnecessary stress in this season. I went into this season feeling like I had something to prove to not only this team and my coaches, but to myself. Heading into next season it’s going to be a lot easier now that I don’t feel the pressure to prove who I am as an athlete. I’m heading into this season with a blank slate, ready to train and ready to let everything I do in the pool speak for itself.”

During his senior year at BCHS, Pouch was named to the all-Nevada team after placing first in the 200-meter individual medley and 100-meter breaststroke, as well as part of the 200- and 400-meter freestyle relay teams at the state championships.