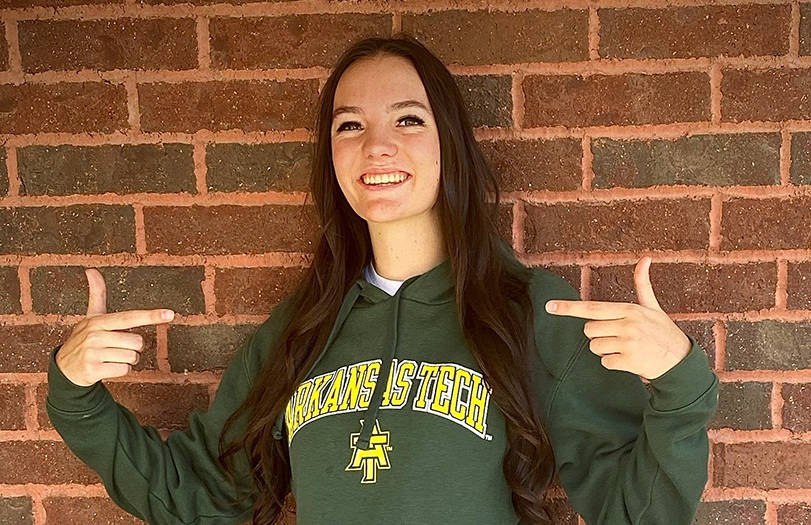 Raving about her official visit to the campus last fall, Arkansas Tech University is a Division II program in Russellville, Arkansas.

“I absolutely love the team and the coaches,” Orton said. “I got to go on a visit last November and practice with them and I just love the dynamic of the team and their chemistry is amazing.”

A multitalented athlete for the Lady Eagles, head coach Kurt Bailey praised Orton for not only her versatility on the court but her ability to put the team’s needs before her own.

“Sierra is one of those players who will always do what’s best for the team,” Bailey said. “Whatever a coach asks her to do, she will do that to the best of her abilities. She wants success for the team more than herself.”

Named to the 3A Southern All-Region second team last season after generating 84 kills with 39 blocks and 19 digs, Orton was a key part in the Lady Eagles’ ability to win their third consecutive 3A state championship last season.

“Sierra’s fought through some tough injuries and has worked hard to get back,” Bailey said. “She’s a very unselfish player and a key part of what we’ve been able to accomplish. Sierra brings a different skill set to our team with her ability to play multiple positions. Her blocking ability is great. (She) really helped us out, putting her on the other team’s best offensive player last season.”

Praised for her ability on the court by peers and coaches, Orton still sees room to grow, not only as a player but as a person. She feels confident Arkansas Tech University is the program capable of achieving that.

“I’m extremely excited about the speed of the game and just being able to compete at the next level,” she said. “From how the coaches coach the team, I know that I’m going to grow so much as a athlete and as a person.”

Confident Arkansas Tech University can help her grow, Orton said she is ready to return the favor, looking to not only bring a specific skill set to the Golden Suns, but also leadership.

“I believe that my blocking will be a huge help in both the middle and right-side positions,” Orton said. “I’m also a team player even through the difficult times. I have always had this mentality to never give up and I’m very good at keeping people out of their heads and overthinking the mistakes, which I think will be very helpful for our team chemistry.”

Excited to get on the hardwood for the Golden Suns, Orton said she is also pleased with the school’s academics, a key reason why she committed to Arkansas Tech University. She plans to major in either prephysical therapy or preveterinary.