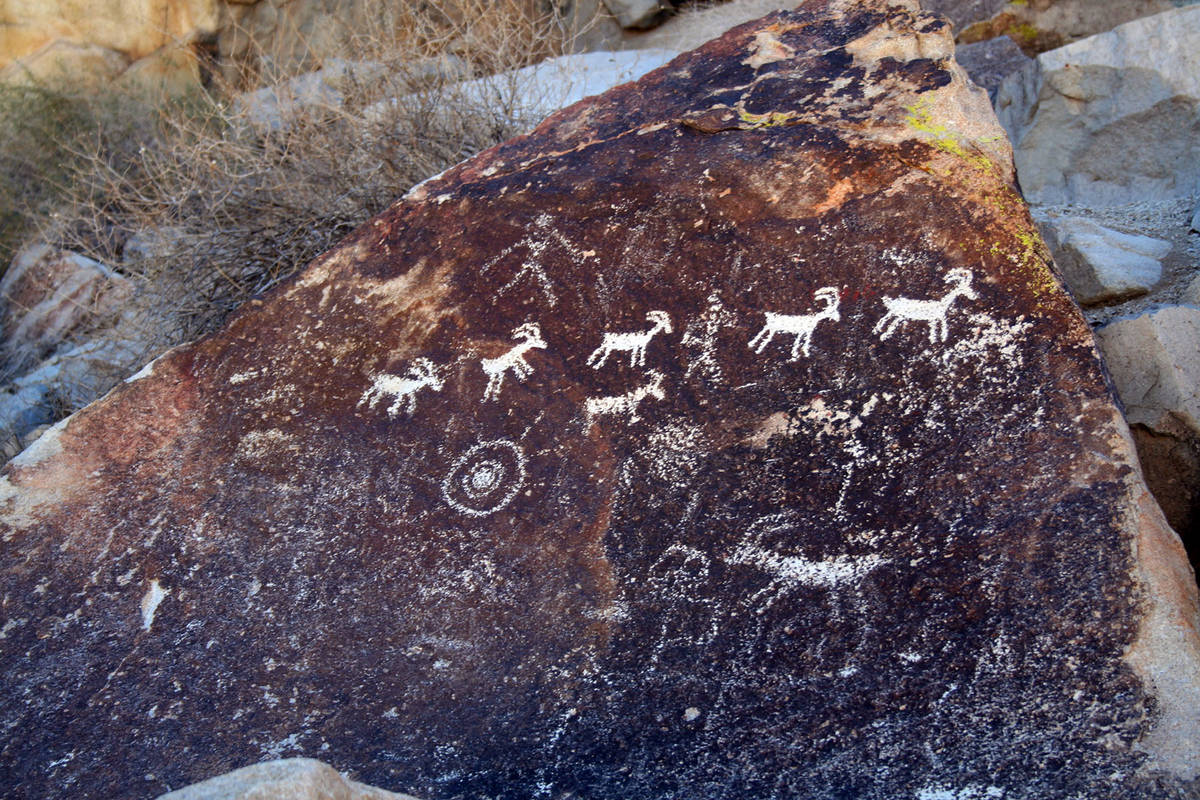 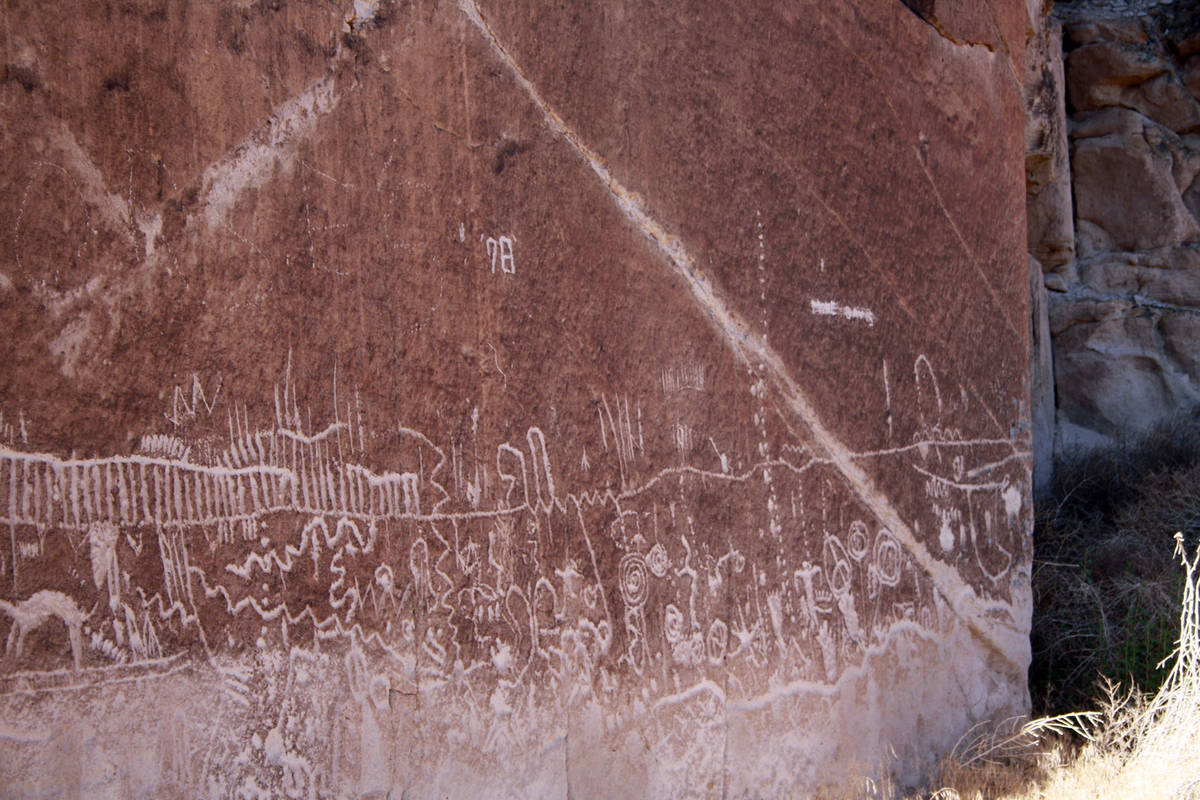 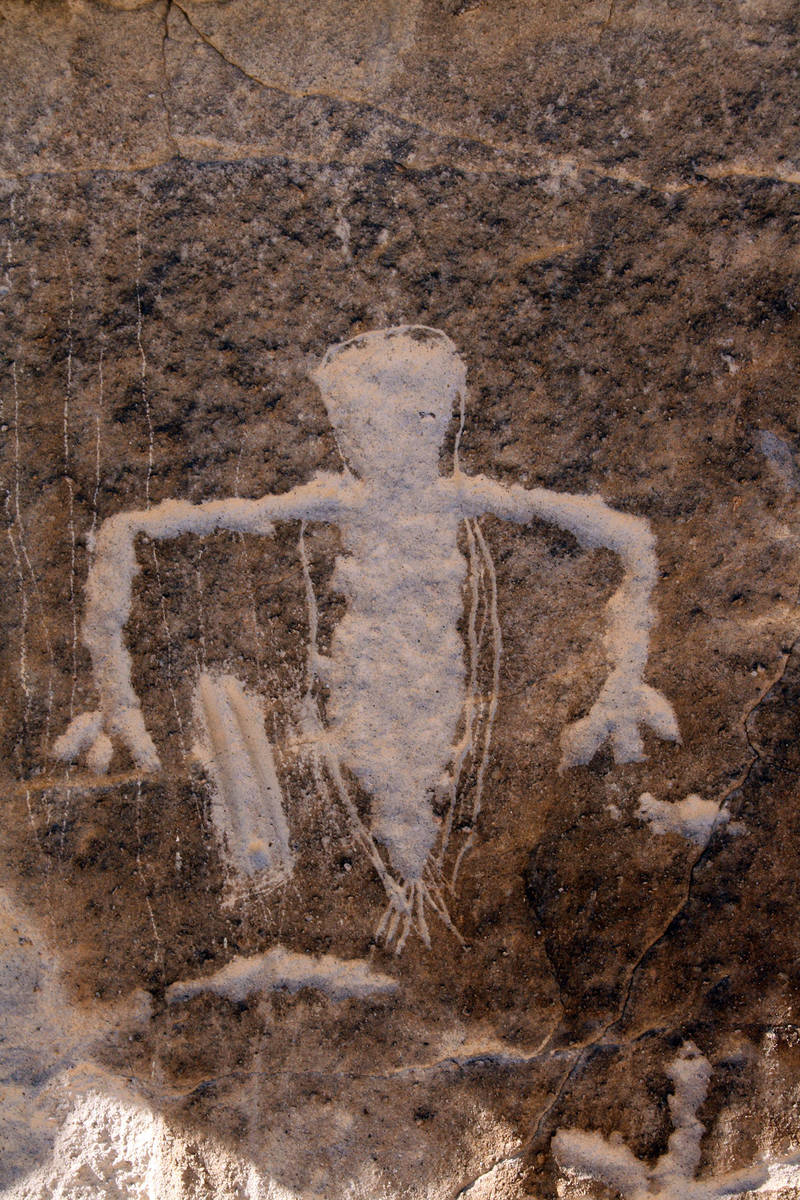 (Deborah Wall) This well-defined petroglyph is found in the “Amphitheater” at White River Narrows, part of Basin and Range National Monument, north of Hiko, Nevada. 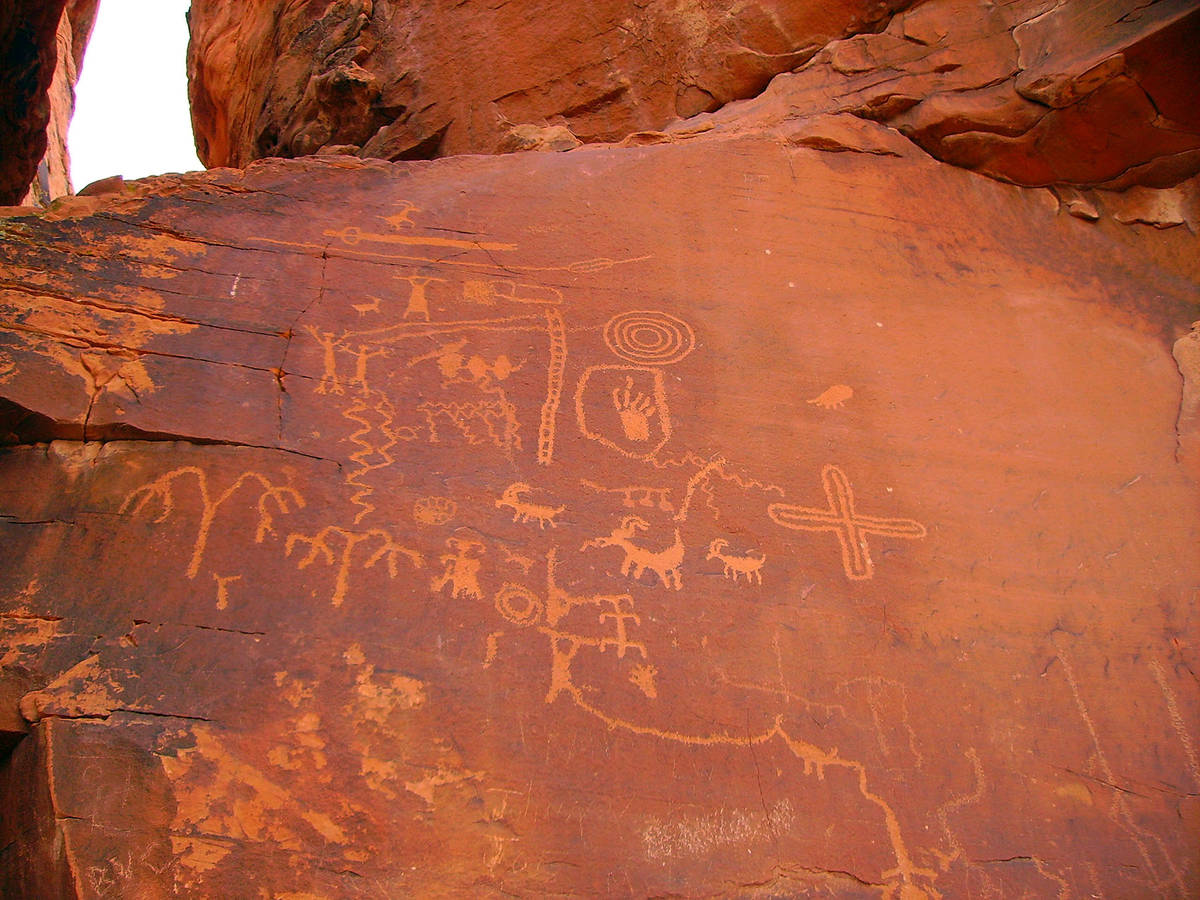 (Deborah Wall) These petroglyphs are found at Atlatl Rock in Valley of Fire State Park, which is 16 miles south of Overton, Nevada.

If you can’t get outdoors to enjoy the sights and our natural treasures right now, a great thing to do would be to find out more about them on the internet. One good choice might be to learn more about rock art, specifically petroglyphs and pictographs, as there is a large concentration in our area.

Long ago, American Indians pecked or etched patterns thought to be abstract, as well as calendars and representations of animals and humans, into the natural desert varnish that forms on some rock surfaces in our dry climate. These are called petroglyphs, and the etchings expose the lighter rock underneath. The pattern or figure that was scratched in now stands out against the darker patina making it highly visible, even from some distance.

With pictographs, which are rarer, the drawing is painted on the rock. You won’t see these as much because of weathering and exposure to the elements. The ones you do see are found in naturally sheltered areas such as rock alcoves, caves and overhangs that have prevented the pigments from weathering away.

The most recent rock art is from historic times, for some of it depicts European people carrying rifles. Scientists can make only educated guesses about the age of older art. Some is very old indeed, for it has acquired a new coat of desert varnish. And some seems to have been carefully renewed by later generations, themselves long since vanished. One unsolved mystery is why it isn’t found just everywhere but is highly concentrated in certain places.

If you have children, you might wish to show them images and introduce them to rock writings. If you are an outdoor-loving family and hike, if you haven’t already, you will be sure to see them at some point at one of our state parks, National Park Service lands or on Bureau of Land Management lands. They make a great lead-in for kids to learn about our region’s rich Native American culture. Explaining that not even archaeologists, who have studied rock art for decades, agree on the true meaning of particular symbols can get children excited and willing to join the conversation. Children love an unsolved mystery and to put in their two-cents worth regarding what they think the figures represent.

Petroglyphs and pictographs found in our region are irreplaceable and a cultural treasure. Defacing them, moving a boulder or bringing one home with you are all federal crimes. Be sure to never touch the rock art as the oils from your hands can ruin them. Also never climb on rocks, boulders or cliff faces that contain them; carry binoculars to get a more responsible, and safer, close look at inaccessible rock art.

There are dozens of wonderful sites on the internet with images of pictographs and petroglyphs. Here are a few excellent sites to get you started: http://www.bradshawfoundation.com, http://www.nvrockart.org and http://www.sierrarockart.com.