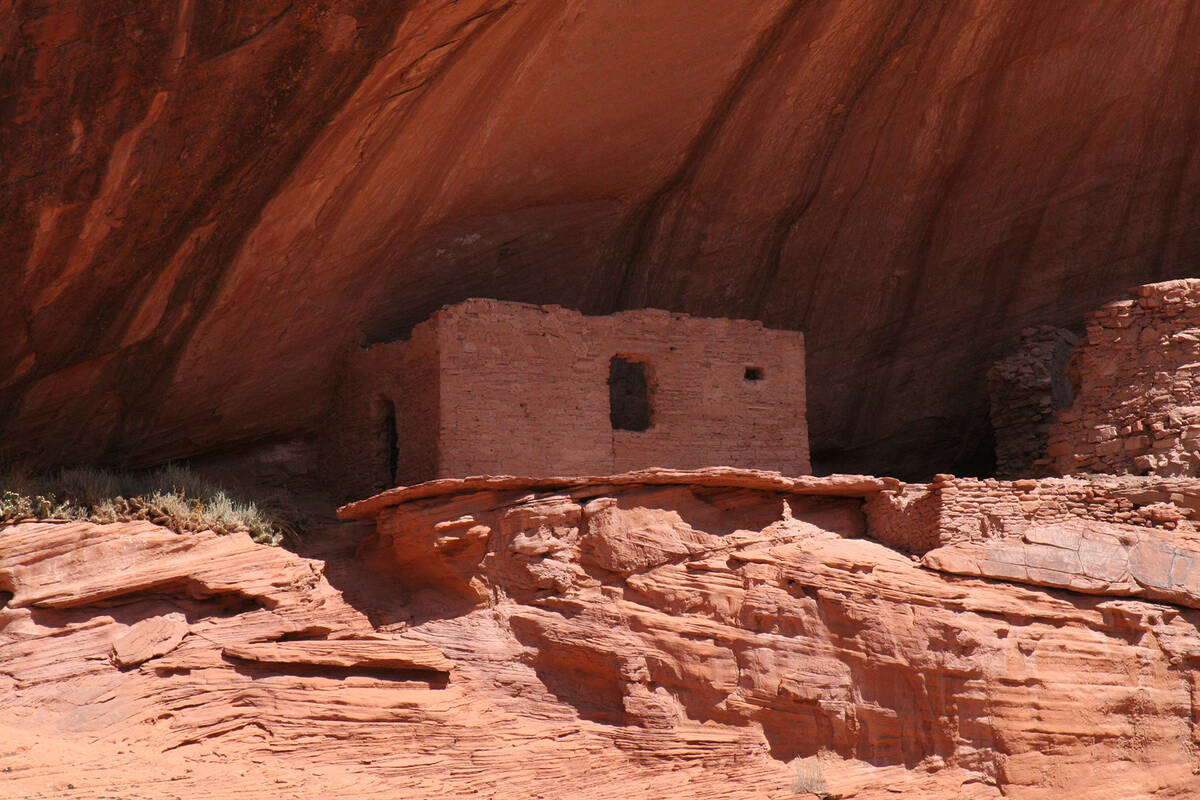 (Deborah Wall) Most dwellings in Canyon de Chelly National Monument in Arizona were built in deep alcoves so they were protected from the weather. 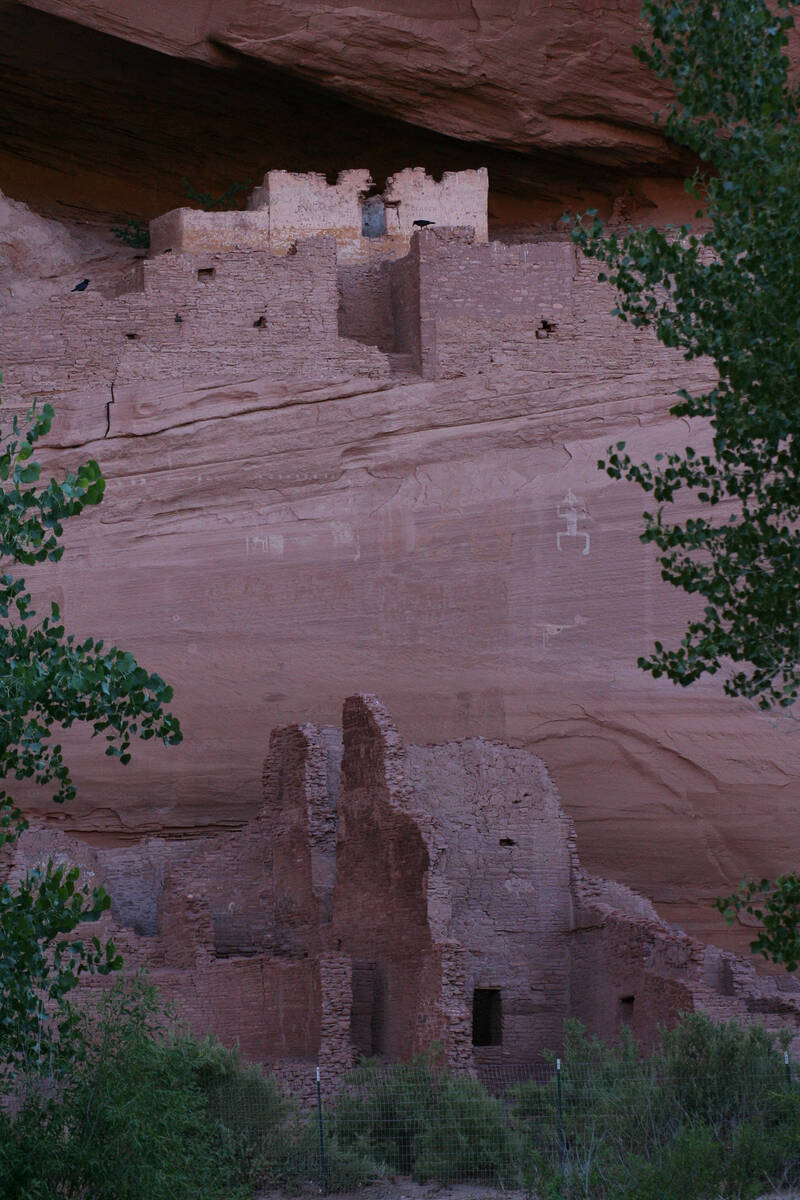 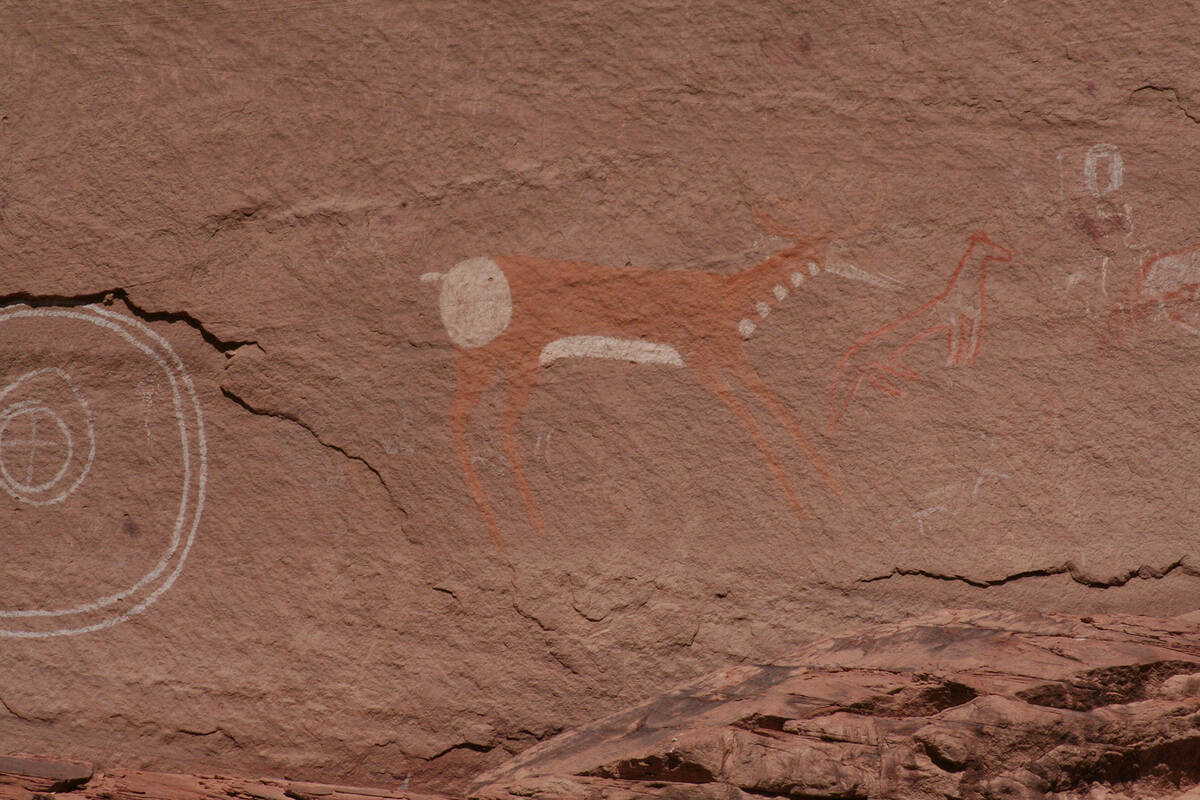 (Deborah Wall) Pictographs are painted on the rock at Canyon de Chelly National Monument in Arizona and are usually only found in alcoves or caves where they are protected from the elements. 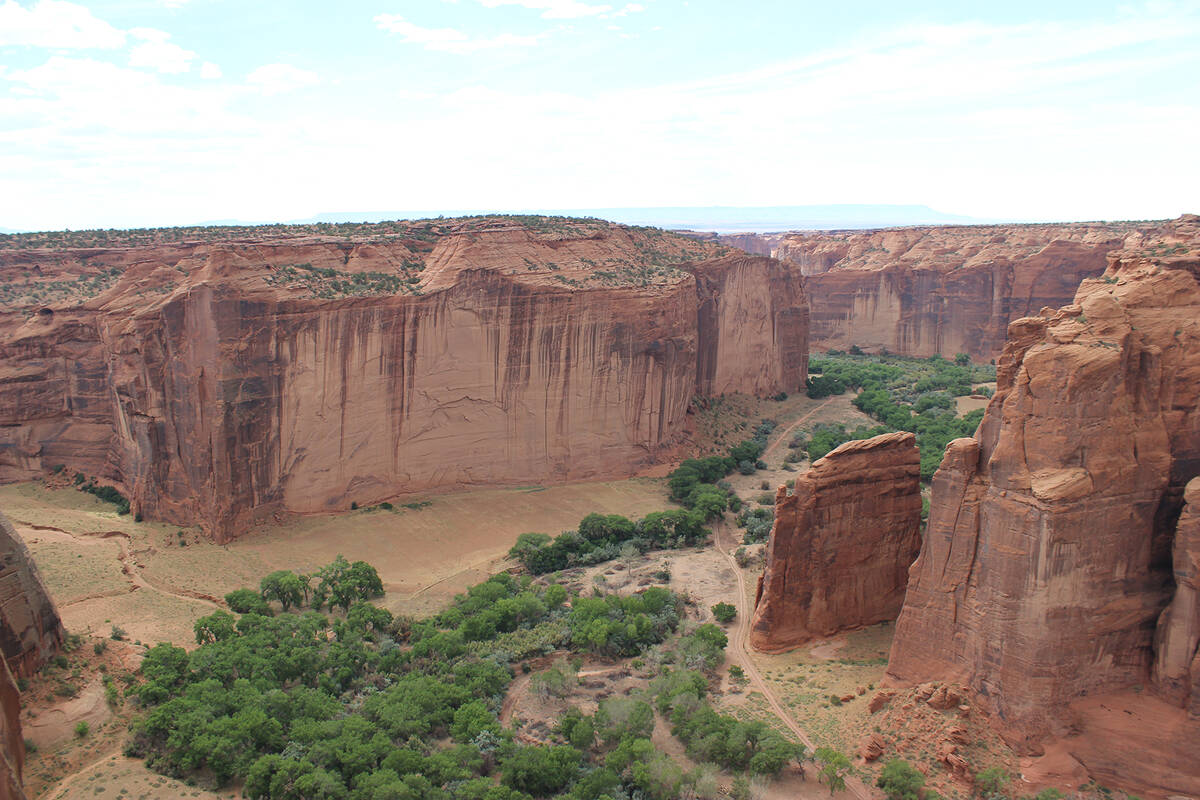 (Deborah Wall) The steep red sandstone cliffs at Canyon de Chelly National Monument near Chinle, Arizona, rise 1,000 feet off the fertile farmland of the canyons below. 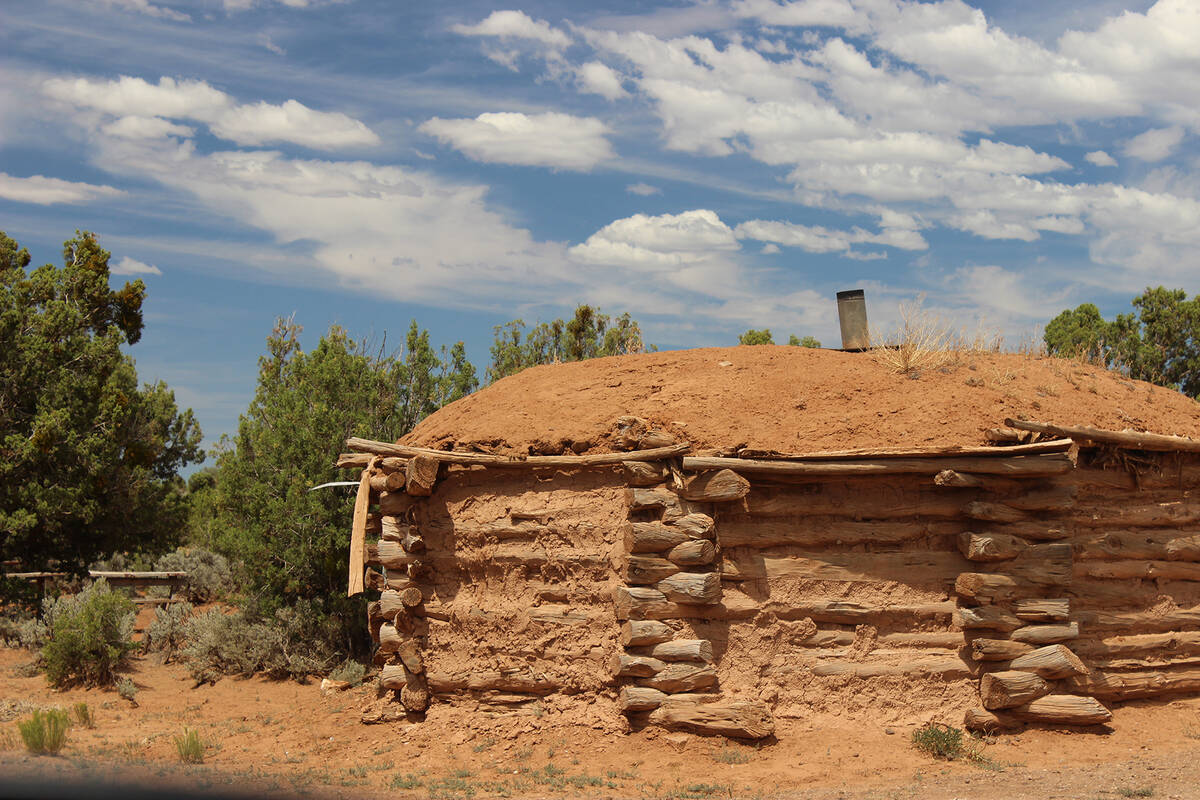 (Deborah Wall) The hogan is a traditional dwelling and ceremonial home for the Dine’ (Navajo). Hogans are usually made with wood logs, tree bark and mud and can be found within Canyon de Chelly National Monument in Arizona. 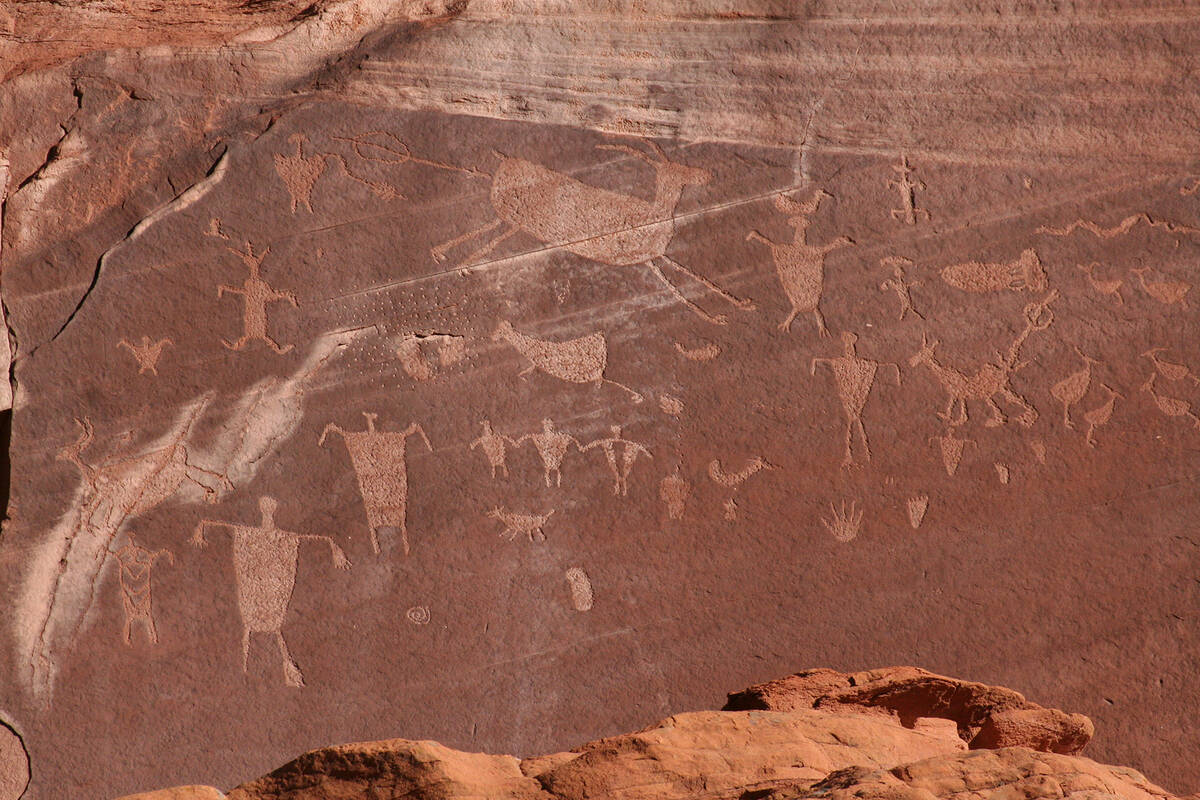 (Deborah Wall) Petroglyphs are etched into the sandstone and can be found throughout Canyon de Chelly National Monument in Arizona.

Visiting Canyon de Chelly National Monument in Arizona will be a different experience from most federal reserves. Because the place is of extraordinary importance to the Navajo people, it remains their property and is managed jointly by the Navajo and the National Park Service.

Access is limited in the park. Unaccompanied visitors are allowed at nine open overlooks along the North and South Rim drives, getting a bird’s-eye view into the canyon. But to get a closer look at the extraordinary historic sites, and better understand them, you will want to sign up with a Navajo guide. They can lead you to the park’s famed archaeological sites, such as former dwellings, pictographs and petroglyph panels. You will also learn about the history of the area and its importance to the Navajo.

Canyon de Chelly (pronounced “de-shay”) is about 400 miles from Boulder City, in the Four Corners region of the state. It is about 6,000 feet above sea level, so expect temperatures about 20 degrees cooler than the Las Vegas region. The best times to visit the park are in April and May and again in September and October.

Located at Chinle, Arizona, within the Navajo Reservation, the park was established in 1931. It encompasses 84,000 acres and is still home to about 40 Dine’ (Navajo) families. The main canyons to visit are Canyon de Chelly and nearby Canyon de Muerto.

People have lived in these canyons for nearly 5,000 years. Evidence indicates the first just camped here, yet left petroglyphs and pictographs as testimony of their presence. The next residents belonged to a culture now called Basketmakers, who came about 2,500 years ago and built compounds and storage areas high on the cliffs and ledges. These were followed by the ancestral Puebloans, believed to be forbears of today’s Pueblo and Hopi peoples, who built multistoried villages and kivas.

Navajos arrived in the 1700s and, like those who came before, used the canyon to support themselves. The Navajo raised domestic sheep and goats, and planted crops and orchards. Corn, alfalfa and fruit orchards continue to thrive here in the warmer months. The canyons also supplied a wide variety of native plants that were used for food, medicines and dyes.

There was an abundance of wildlife such as deer and rabbits. Bobcats, mountain lion, wild turkeys and even bear are still seen.

In January 1864, Canyon de Chelly was one site of the pivotal U.S. operation of the Navajo Wars. Col. Kit Carson forced the surrender of 8,000 Navajo from their homeland. Some Navajo were killed; most survivors were forced to march more than 300 miles to Fort Sumner in New Mexico Territory in an ordeal now called “The Long Walk.” Many died of fatigue, hunger and thirst along the way; others died of disease and related causes at the poorly designated site where they were forced to remain.

In 1868, the U.S. government released the ones who survived. They were allowed to return to the canyons but found their crops, livestock and hogans (homes of mud and logs) destroyed. The survivors rebuilt what they could, and traditional hogans can be found to this day.

Sign up with an approved Navajo guide for a hiking, four-wheel drive or horseback tour within the canyon. There are many lengths of excursions available and guides will tailor the trip to your wants and needs. Plan to spend a least half a day. If you have the time, a full-day or multiday excursion will be better to enjoy the tranquility of both Canyon de Chelly and De Muerto canyons. There is a list of guides and what they offer, available on the park’s website at www.nps.gov/cach.

Near the park’s entrance is the Canyon de Chelly Cottonwood Campground. The sites are available on a first-come, first-served basis. No campfires are allowed. For information, contact Navajo Parks and Recreation at 928-674-2106 or visit www.navajonationparks.org.

For a more wilderness experience, and in the park itself, is the privately owned Spider Rock Campground. It’s rustic and without frills, but you can have a campfire. They also sell firewood and offer not only campsites but also authentic Navajo hogans for visitors to stay in. Call Spider Rock at 928-674-8261 or visit www.spiderrockcampground.com.

The town of Chinle is located about 2 miles outside the park’s entrance. It has a grocery store, post office, gas stations, convenience stores, fast food places and local lodging.