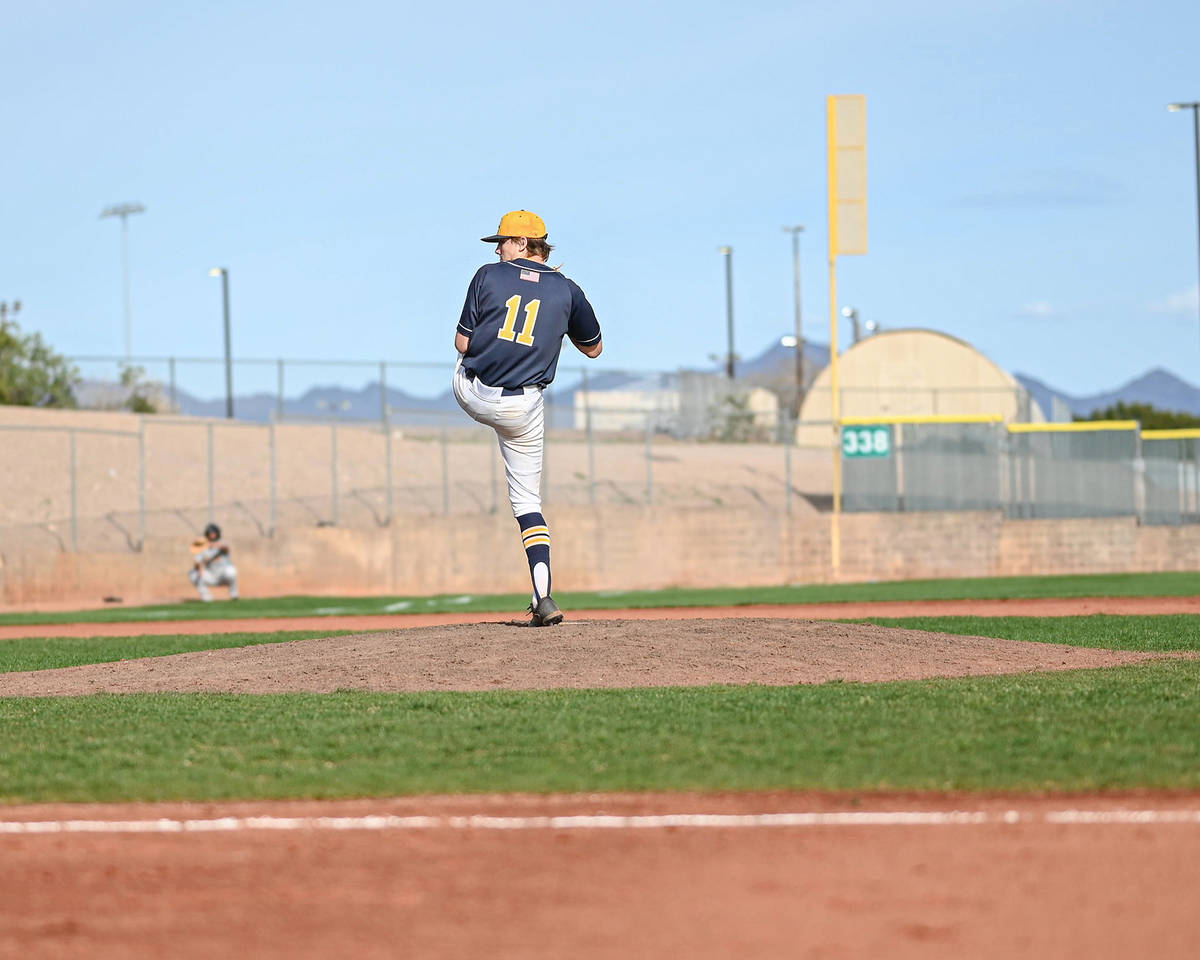 A talented pool of pitchers such as senior Jonathan Neal, seen in action March 9, should benefit Boulder City High School's baseball team if spring sports resume for a shorter season.

The spring sports season for high school sports remains in suspension due to the COVID-19 pandemic.

The Nevada Interscholastic Activities Association suspended the season March 13 and has been making contingency plans for a modified season once school resumes, said Donnie Nelson, assistant director of the association.

Plans had been made to resume the season April 22, assuming students were returning to school April 16. However, Wednesday morning Gov. Steve Sisolak extended the closure order for schools and other public facilities until April 30.

Nelson said at this point there are no plans to cancel the spring season. As long as students are physically on campus, a modified schedule will be put in place.

“I think it’s wonderful that the Nevada Interscholastic Activities Association has forgotten about us,” boys volleyball coach Rachelle Huxford said. “With all the important things going on in the world right now, I think it’s great that they’ve at least kept the possibility of playing a shortened season alive. Whatever happens moving forward, it’s nice to know that they’re keeping our student athletes in their priorities and trying to get them back to the game they love.”

The NIAA’s plan accommodates both team and individual sports.

For baseball, boys volleyball and softball, the plan calls for teams to be divided in pools of three to five within their classification and region to determine seeding for an upcoming region tournament.

For individual sports, swimming and track, schools will be allowed to enter the maximum number of entries for each event for the region meet instead of athletes having to qualify due to time restraints.

In boys golf, entry would be determined by the number of schools in the region and the course’s ability to handle the number of golfers. Each school will be allowed to enter a team of six golfers in a region tournament qualifier.

Current regional tournament schedules for all spring athletics range from May 7-9. It is unclear at this time whether those dates will go on as planned or be pushed back accordingly.

Excited for a potential shortened season, boys volleyball and baseball program coaches said they feel they would benefit greatly from the new schedule, given the depth of their teams. Both programs came into the season as state title favorites.

“We’d be really excited to play a shortened season,” baseball coach Ed McCann said. “Especially in a sport like baseball where you only have so many pitchers, we feel like we would benefit from a compressed schedule given how many talented arms we have on both varsity and junior varsity teams. More than anything, these kids just want the opportunity to compete. This is one of the most talented teams I’ve ever been around. I hope they get the opportunity.”

Playing their last game March 11, a 3-0 victory over Southeast Career Technical Academy, boys volleyball, along with all athletic teams, will have been gone more than a month from competition or organized practices. Huxford said she doesn’t see an excess of rust to work off for her program.

“I know all my players are doing whatever they can to stay active,” Huxford said. “They may not be playing volleyball right now due to the current social distancing restrictions, but I know they’re staying fit and ready to compete. We benefit from having a deep group who has played together for the past few seasons. I don’t think it would take them long at all to jell again on the court.”

Preparing for the possibility that schools reopen later than April 16, the NIAA is adamant that competition will not go beyond the dismissal of school, which is currently slated to end May 20.

If lack of time presents an issue, the NIAA has constructed a plan for competition to resume through a region tournament only. State tournaments are currently slated for May 14-16.

The NIAA plans to meet to discuss the extension of school closures and expects to release a statement by Friday, April 3, morning, Nelson said.