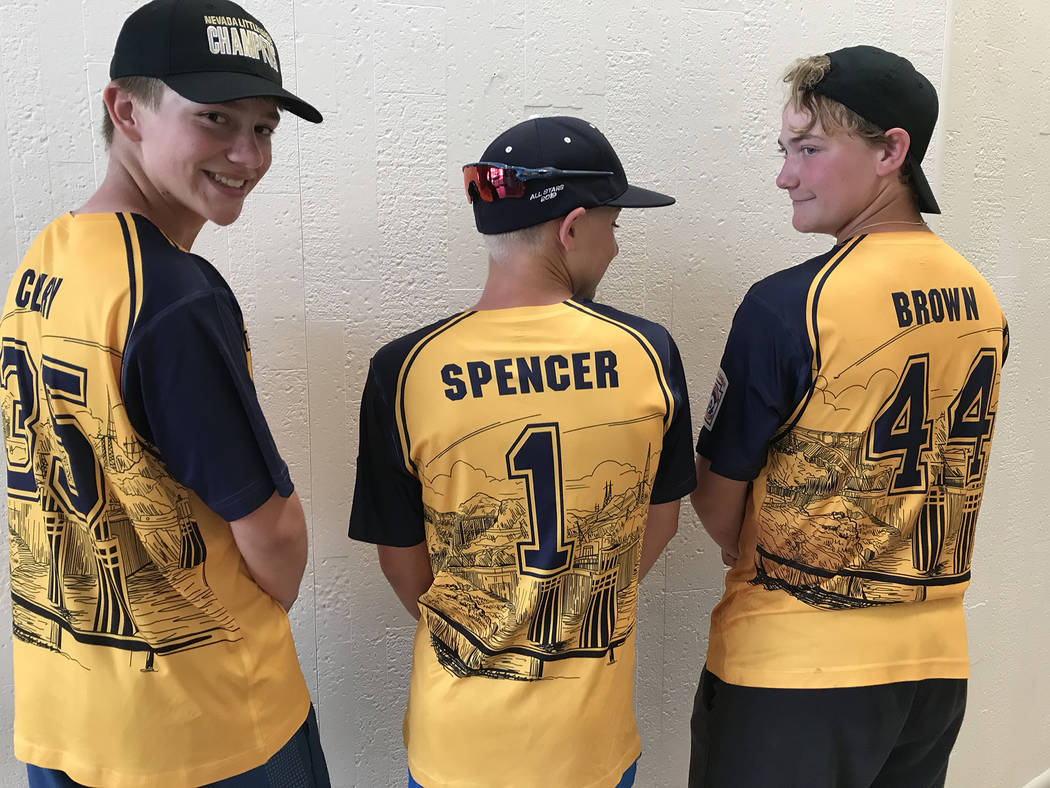 The old expression is if you look good, you feel good. That proved to be true for members of Boulder City Little League’s Junior All-Star team.

Not only were the team’s jerseys stylish in their traditional gold and navy blue color scheme, they paid homage to the members’ hometown with an image of historical Hoover Dam on the back.

Credited with the idea behind the design, Sam Owens, director of equipment for Boulder City Little League, said he wanted to create something special for this year’s junior all-stars that represented the town’s history.

“I saw the idea a few years ago from the high school and I fell in love with it,” Owens said. “I know they used injected ink and I won’t pretend to know everything behind it, but I know you can put images on a blank canvas so that kind of is how this all started.”

Trying to differ from the Eagles’ original look, Owens took his passion for the idea to the next level, getting in contact with jersey representative Bob Wells from BSN Sports in order to create the right look for this year’s District 2 junior representatives.

“The Eagles’ high school jersey kind of looks down from the bridge and I wanted ours to be different,” Owens said, “I called Bob and told him I wanted to see the back side of the dam, so his designers came up with the vision and as soon as Katie (Kilar, Little League board president) and I saw it, we knew that’s what we wanted.”

Creating a flashy new look, Boulder City juniors head coach Clint Spencer loved the idea, saying it was the perfect way for the team to pay homage to their community and its historical landmark.

“Last year we went with a red, white and blue theme, so this year they wanted to go back to the tradition gold and navy,” Spencer said. “Hoover Dam is the heart of this community, and what this town was founded on, so they wanted to go with more of a hometown look and pay respects. Honestly, there’s no better way to do that. I think the jerseys came out very well.”

Putting the heart and soul of the city on display, players said they were excited and grateful to the Little League board of directors for coming up with such a unique idea for this year’s jersey scheme.

“Right when I first saw them, I was a little surprised,” Hunter Moore said. “I didn’t really expect that type of design. I knew we were going back to the gold and blue, but I just expected regular stripes on the back. Seeing the Hoover Dam on the back of our jerseys was really surprising. I didn’t expect them to put that much effort into our jerseys. The turned out really good.”

Pleased with the joy and delight the jersey’s design brought the junior all stars, Owens said he is already thinking of new ways to be creative and is excited for what comes next.

“I’m really excited that they liked the uniforms,” Owens said. “Uniforms can definitely get stale after a while. I really want the kids to be eagerly excited to see what the uniforms look like and to be proud and happy. With the advancements in uniform technology, the possibilities are endless for what we’ll be able to create.”

“I saw (team member) Charlie Stewart’s jersey and it turned out really nice,” Owens said. “I really like the back side of it, I thought it was a really cool thing. I’m kind of a home guy and its easy for us to create something cool because we have a lot of thing that are associated with Boulder City. Not just the dam, but you can put a bighorn sheep or the lake. I think that’s definitely something we could plan for the future. I’m not quite sure how that will turn out, but right now that’s kind of where I’m heading.”

While Owens thinks of new ways to improve upon this year’s uniform, the junior all-stars are exited to show off their dapper apparel and their heritage when they arrive in San Jose, California, on Friday, July 26, for the Western Regionals.

“One of the things I hope we can show off is the stability of this town,” Spencer said. “Palm trees on our jerseys certainly wasn’t going to do that, so the Hoover Dam was the obvious choice. It brings a lot of tourist to our town. This isn’t just a drive-by town, there’s a lot of historical significance here and we’re proud to represent our town at regionals with pride.”