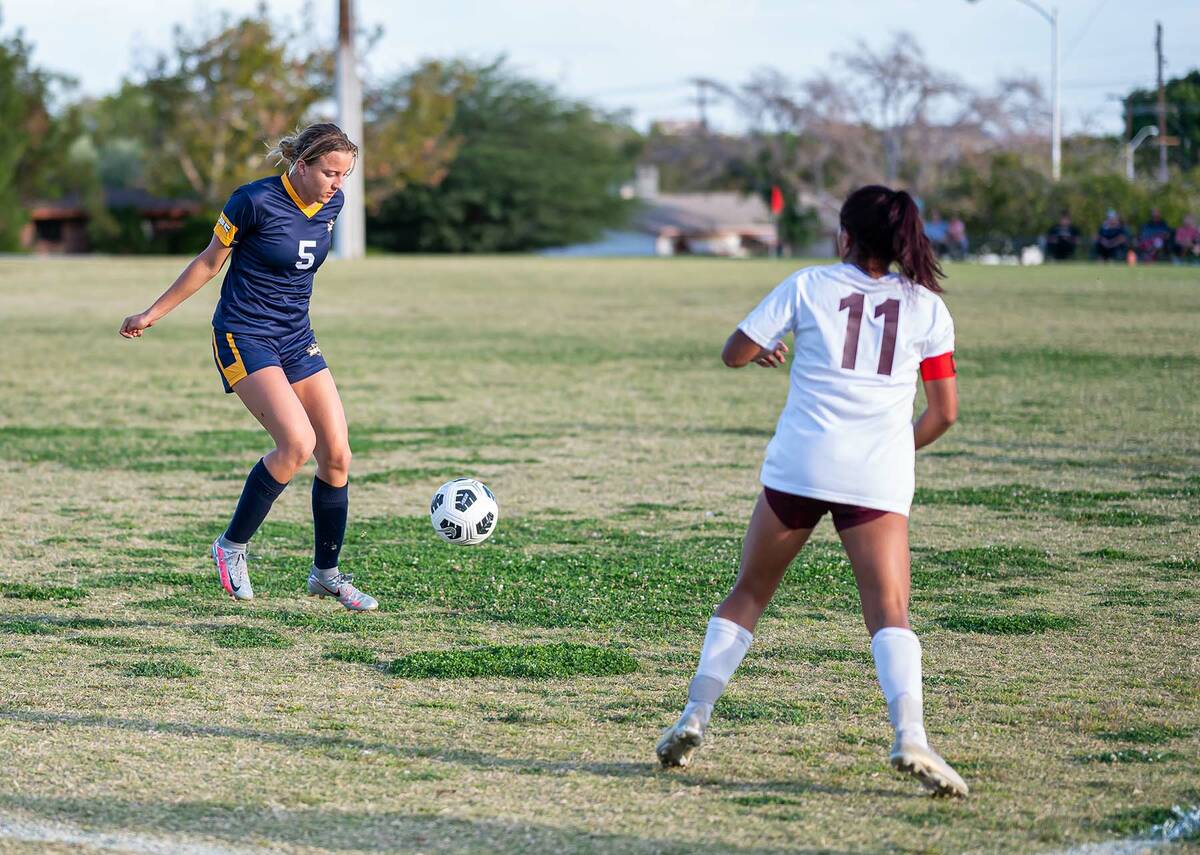 (Jamie Jane/Boulder City Review) Paeton Carver, a senior at Boulder City High School, defends the net in the Lady Eagles’ 5-0 loss to Pahrump Valley on Monday, Oct. 4. It was the team’s first loss of the season.

Head coach Arnold Oeland said this loss was an opportunity for his girls to get better and make necessary adjustments as the Trojans (5-1 record) join the Lady Eagles’ (5-1-1 record) as state tournament contenders in the 3A classification.

“Absolutely, this was a good loss for our girls,” he said. “Pahrump played well and played a good game. Adversity reveals character and losses can create opportunity for refined future success. We will play Pahrump again and we will adjust our defense and offensive strategies based on Pahrump’s style.”

Uncharacteristically shut out for the first time this season, the Lady Eagles had outscored opponents 44-3 in their first six games of the season. Now it’s time to go back to the drawing board and continue to diversify their offensive attack.

“The lesson to be learned is no matter what previous strategies have been successful, we have to evolve based on our opponent,” Oeland said. “We are a good team and we must evolve and have diversity in our game play. Winning affirms success, while losing is humbling and yet also creates desire for success, which drives the soul of the game.”

Experiencing the same humbleness, the boys program finished 1-2 during its most recent slate of games, falling to 6-4 on the season.

Facing the top two teams in the 3A Mountain League, the Eagles lost to SLAM Academy 6-2 on Friday, Oct. 1, and Equipo Academy 8-2 on Tuesday, Oct. 5.

“We played the top two teams in our league and although we lost, there are definitely positives to build on,” boys head coach Haden Jaramillo said. “We’re a very young team and it was nice see to see that we were able to make it a game with them for at least the first half. It’s definitely a confidence builder for our guys, who are mostly sophomores and freshmen, while also letting them know what they need to improve on.”

Against Equipo Academy, Rose had a goal and an assist while Robert Crowl scored a goal.

Kessler added an assist for the Eagles. Freshman goalie Zane Ranney, who has averaged eight goals per game during their undefeated seven 3A Mountain League victories, had 15 saves against Equipo Academy.

Ending September with a 2-1 win over rival Moapa Valley on Sept. 29, Rose and Crowl each scored a goal, and Wright added an assist.

The boys will host Somerset Academy Sky Pointe today, Oct. 7, followed by a home game against Pahrump on Wednesday, Oct. 13.

The girls will have a trio of games this week, hosting Durango on Friday, Oct. 8, and Equipo Academy on Monday, Oct. 11, followed by a road game at Del Sol on Tuesday, Oct. 12.