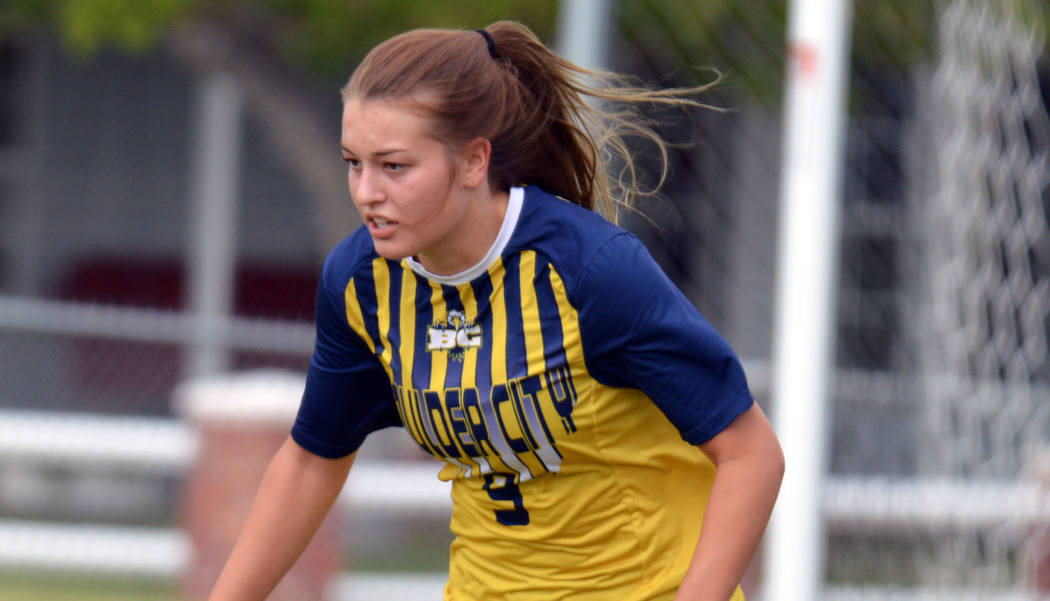 Off to its best start in the past five seasons, Boulder City High School girls soccer team advanced to 7-2-1 on the season.

Defeating SLAM Academy 6-0 on Sept. 18, the Lady Eagles are on the verge of eclipsing eight wins for the first time since 2012 (8-7-1), with more potentially on the way due to the ever-evolving culture head coach Arnold Oeland has instilled in his team.

“We’ve been very good up to this point, but I can really see us turning a corner and becoming great,” Oeland said. “We preach to these girls every day they need to play better than the day before because other teams are training to be great. They understand that every game there will be great things we did and things that need to be worked on. They’re striving to get better by working on their individual skills and soccer IQ.”

“We’re studying our opponents’ weaknesses and trying to match up our best players against them,” Oeland said. “We’re able to make adjustments, whether it’s pregame or midgame and put our players in favorable positions so they can find the most success on the field. With so many options, teams don’t know whether we’re coming from the left or the right, (or) up the middle. We spread the ball around and attack our opponents’ weaknesses head on.

“We’ve diversify our offensive attack,” he added. “We’re trying to attack from all angles of the field and keep our opponents guessing. We’ve spread the ball around between five or six players so at any given time we can be successful.

“We’ve really preached this season that it’s equally important for the team to get a goal as it is who gets the goal. The team has really bought in and acclimated to each other and they’re sharing the ball.”

Putting on an offensive showcase against the Bulls on Sept. 18, freshman Genevieve Balmer achieved a hat trick on the day, leading the way with three goals.

Kesler added two assists on the day and Williams added another.

“Our new players have acclimated very nicely into our team,” Arnold Oeland said. “They’ve bought into what we want to accomplish as a team and our senior leaders have welcomed them and gotten them involved in our game plan. They’ve made a great addition to our already strong team.”

Keeping the Bulls out of the net, senior goal keeper Erin Taggard recorded the shutout, giving the Lady Eagles three for the season.

Falling to Sunrise Mountain twice last season, today’s match will be a good indication of how far the team has progressed. Today’s game will be followed by a home match against Chaparral on Wednesday, Oct. 2.