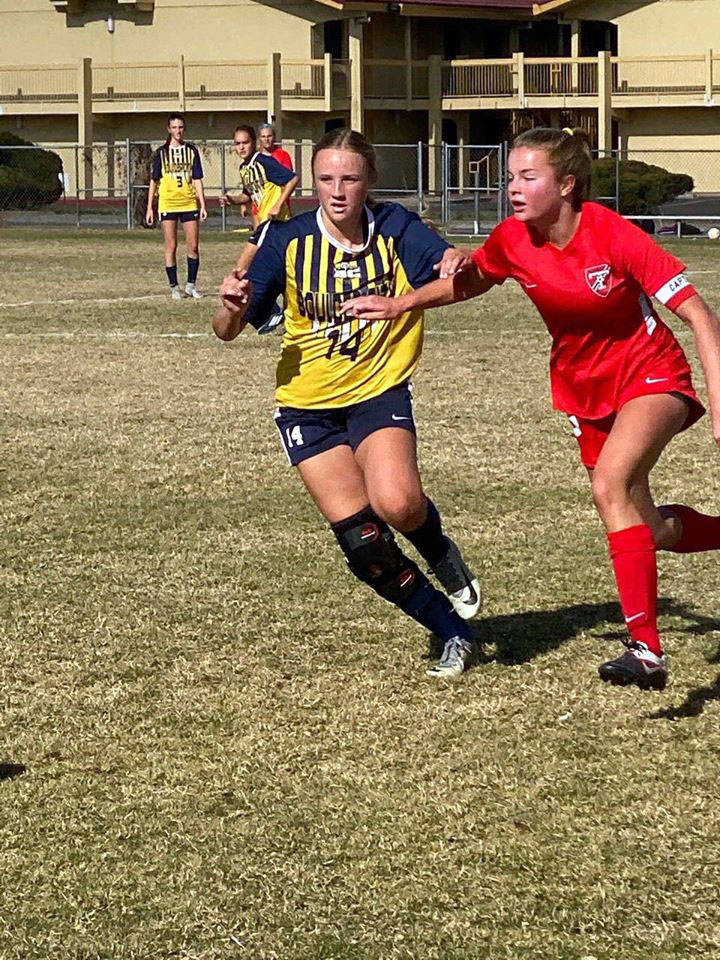 Making its first 3A state tournament appearance since 2011, Boulder City High School girls soccer team ended its season short of the finals, but on a high note with a 2-1 loss to Truckee on Friday, Nov. 15, at Wooster High School in Reno.

“The trip to state was a wonderful experience,” head coach Arnold Oeland said. “The loss was really painful, but to see where these girls have come from and grown was absolutely remarkable.”

Battling to the end with their Northern challenger, the Lady Eagles gave the eventual 3A state champion Wolverines all they could handle.

“We played them very well,” Oeland said. “This was a remarkably close game. Both teams were evenly matched. Truckee has a really good team and our girls put them to the test for the whole game. This is a game where you walk away and say my goodness that was a great one.”

Tied 1-1 for the majority of the game, Truckee pulled away late with a second-half goal.

The Wolverines beat South Tahoe in the state title game 2-0.

Freshman Miranda Williams scored on an unassisted goal for the Lady Eagles. She is one of several key underclassmen who have not only grown from this experience but will be back next season to build off of it.

“We made a lot of goals for this season and one of them was to help our underclassmen progress and get conditioned for the varsity game,” Oeland said. “This run that we had this year — winning 17 games, making it to state, winning a league title — was very valuable for them. They’ve all grown as players and we’re excited to see what’s next for them.”

They will be tasked with trying to better this year’s new all-time wins record (17) for a single season in school history.

“This year was an extraordinary success for the girls soccer program,” Oeland said. “Looking back on the season, we had a great run and it’s because the team stayed disciplined and worked for it. I’m excited for the future of this program. I’m here for the long haul with these girls and look forward to the opportunity of continuing to push them and this program.”