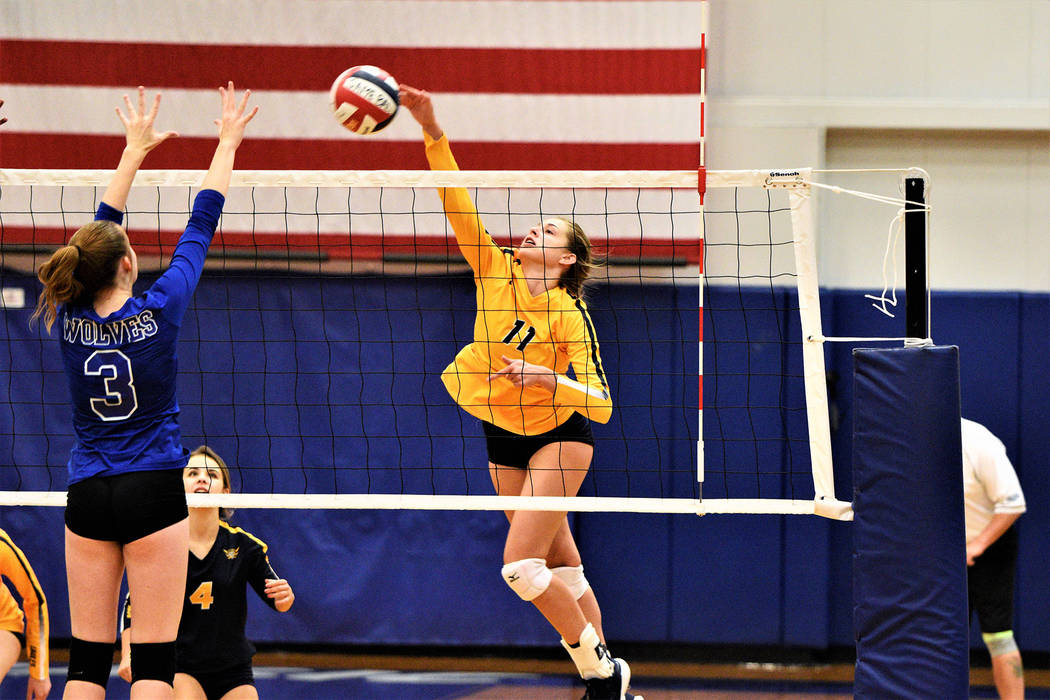 Leading five first-team selections was junior Kamry Bailey, who was named 3A Southern Region player of the year. She led the Lady Eagles with 481 kills, 212 digs, 89 serving aces and 20 blocks.

“Kamry doesn’t stop working,” head coach Kurt Bailey said. “Volleyball has taken over her life. Her hard work has shown in the eyes of the other coaches and opposing players. She deserves this honor.”

“This is an amazing accomplishment for them,” Kurt Bailey said. “Everyone who voted recognized that these girls were deserving. These girls came into the year and didn’t settle. They didn’t relax after last season. They set new goals this season and they went after it.”

Helping Kamry Bailey form a dynamic three-headed offensive monster, Herr nearly doubled last season’s kills output with 336, along with 163 digs, 86 aces and 28 blocks. Prior, who transferred from 4A Foothill, added 291 kills with a team-leading 78 blocks and 45 aces.

Fueling the Lady Eagles’ state championship effort was Wright, who generated a 3A classification 1,180 assists. Robinson led the Lady Eagles in digs (316) and aces (116).

Junior Sierra Orton was named to the All-Region second team after generating 84 kills with 39 blocks and 19 digs.

“Everyone put in a lot of work all off season long, so it was really nice to see that our efforts did not go unnoticed,” Herr said. “It’s a really big honor for the program and I think it shows the depth of our team and how much time the coaches spend year-round to keep everyone involved.”

“Having eight girls make the all-league team is unheard of,” Kurt Bailey. “As a team we’re only allowed to submit eight players, so for all of them to get the nod is really special. Usually only four girls make the team because other coaches want to get their best players recognized, but no one fought us on this. I think because of how dominant we were this season, that helped us and our girls get recognized.”

Kamry Bailey, Herr, Wright, Prior and Robinson were again named first-team selections, while Orton made the second team.

“It is amazing that eight girls made the all-league team,” Wright said. “Being able to practice and play against such amazing and talented girls makes me want to work harder. Competition does not scare me it just makes me excited to get out there and show everyone what I can do.”