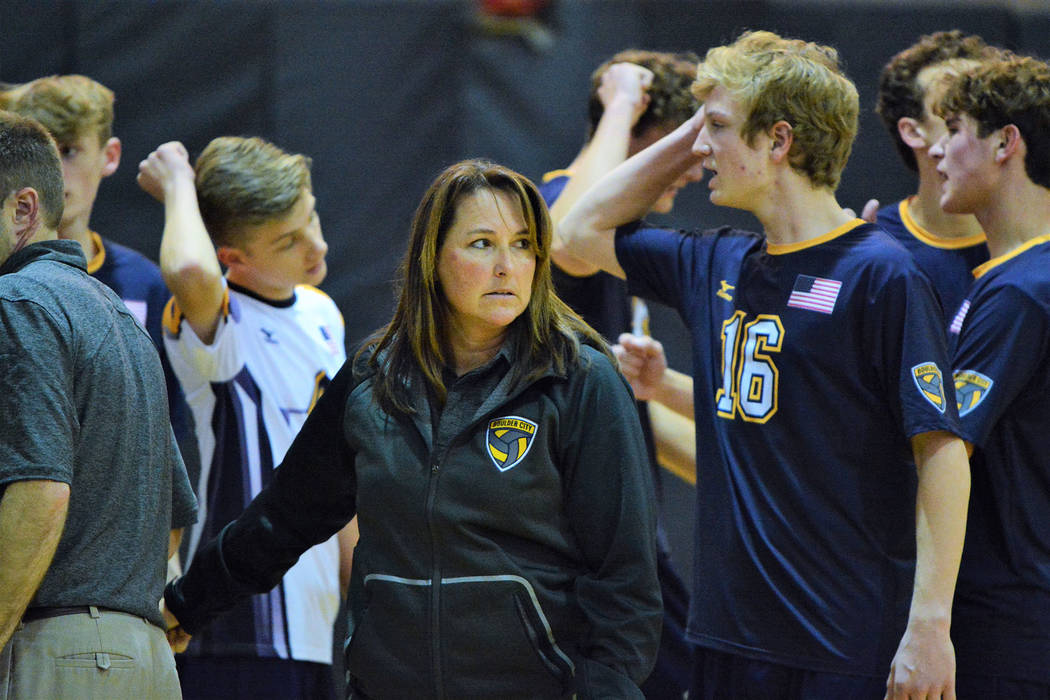 (Robert Vendettoli/Boulder City Review) Boulder City High school head boys volleyball coach Rachelle Huxford, seen breaking from the huddle with her team after a timeout against Somerset Academy Sky Pointe on April 8, 2019, was named the 3A coach of the year by her peers.

Rachelle Huxford, Boulder City High School’s boys volleyball head coach, was named 3A coach of the year by her peers after helping transform the team from a start-up program three seasons ago to a 3A state championship contender.

“Honestly, this was really surprising and I’m honored,” Huxford said. “There’s a lot of great coaches out there and to be recognized by the other coaches in our classification is an honor. We had a really great year this season with the boys and although it didn’t quite end like we wanted it to, I’m pleased with how we played. This season was a really good year for our program and we’re ready to capitalize on it for next year.”

Leading Boulder City to the 3A state tournament in their first season as a classified member, the Eagles’ program as a whole has made strides each season during its three years of existence, rising from a freshman to struggling independent varsity team to perennial league power.

“Honestly, I owe all the success this program has had to our players,” Huxford said. “When we started the program, we could only dream of this type of success this early, but the boys have worked really hard and have turned into really good players the past few years. We’ve really benefited from starting slow and working our way up from being a freshman team and playing an independent varsity schedule last season. We’re already looking toward next season and (will) try to continue the build off of the momentum that we built this season.”

Huxford was referred to as a players coach by senior Karson Bailey, helping the team members believe in themselves during their turnaround season in which they improved their win total to 24 after generating only three last season.

“Coach Huxford taught me a lot during my time playing volleyball,” said Bailey, who was a two-year contributor under Huxford. “I really loved how much fun we always had when we were practicing, but she always told us what we could correct and how we could improve. She also showed us that if we played together and work hard, we could accomplish things we never thought possible, like going from three wins last year to over 20 wins this year and a state semifinal appearance. She’s an amazing coach and I’m going to miss her.”

Helping her team rebound from a rocky start out of the gate, the Eagles started their first season in the 3A classification with a 6-9 record, before winning 18 consecutive games to finish the season 24-10.

Dominant throughout the second half of league play, the Eagles cruised to 3-0 postseason victory over Chaparral on May 9 before falling to eventual 3A state champion Mojave 3-1 on May 14.

Unsatisfied with just making the state tournament, Huxford said she relishes the opportunity to push her team to get better and compete for a championship next season and into the foreseeable future.

“To be honest, I’m having a lot of fun coaching volleyball …,” she said. “We have a really good group of returners coming back and I’m excited to see what we can accomplish next season. In general, I’m excited to see how far we can build this program and I’m just grateful to be a part of this journey.”

Bringing back her entire roster excluding Bailey, the Eagles figure to be a perennial power again next season. Huxford said it’s the program as a whole, with the talent level coming from the freshmen and junior varsity teams, that will determine the program’s success.

“Our participation numbers have grown each year and I expect another jump in numbers for next season,” Huxford said. “Kids want to play for a winning program and I think our success is really going to open new doors.

It’s important we keep all three levels stocked with new and talented players to help us sustain the success we’ve been able to achieve at the varsity level. Its been great to build this program from the ground up and I’m excited to continuing building.”