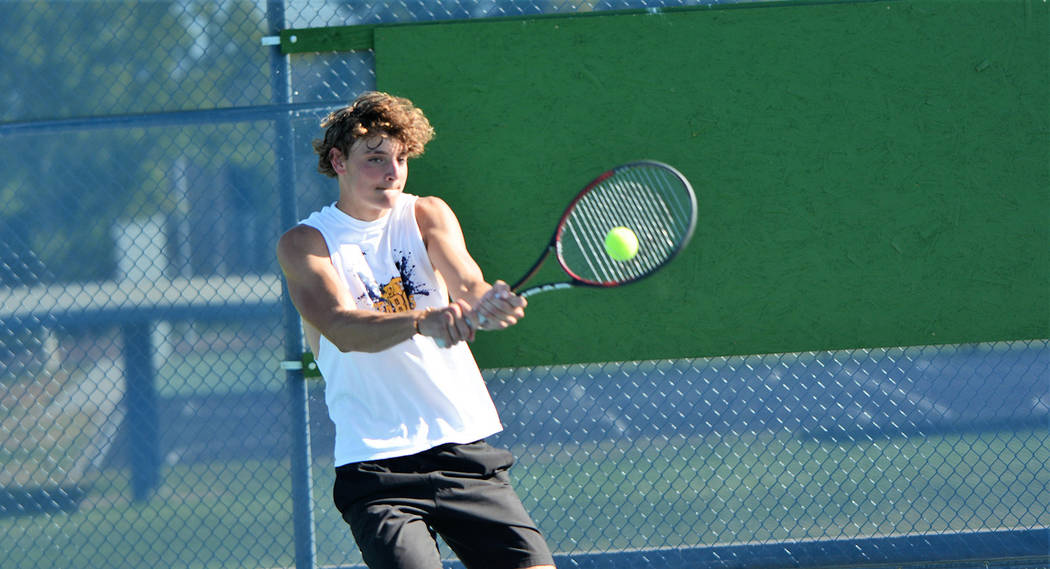 Senior Preston Jorgensen, seen during an August practice session, shared the 3A All-Southern Region player of the year honor with his doubles partner, Boen Huxford, after they won their second consecutive state championship and helped the boys team win its third straight state title.

In all, eight Eagles were selected to the first or second all-region teams.

“It was all very much deserved for each of those players,” head coach Rachelle Huxford said. “A lot of these boys worked hard all four years to make it on this list and their postseason play demonstrated their ability, talent and hard work.”

Leading the pack for the Eagles, Jorgensen and Boen Huxford were named first-team selections after winning their second consecutive 3A doubles title, defeating Travis Lee and Juan Vasquez of South Tahoe 6-1, 6-2.

“I’m really proud of those two,” Rachelle Huxford said. “They’ve worked really hard to get to this point. They were unbeatable all year and I believe they would have done well in the 4A classification as well. They deserved this player of the year honor.”

Mikkelson finished as the 3A state runner-up in singles play, falling to Western’s Rua Elmore 6-3, 7-5, while Pendleton and Soileau finished fourth.

Erlanger finished 1-2 in the Eagles’ 10-7 state championship victory over rival The Meadows, while the Rose brothers broke out as star players down the stretch, finishing the season with a 2-1 record.

“I was a little surprised that Kannon and Kenny did as well as they did,” Rachelle Huxford said. “They adjusted really well to a difficult sport. A lot of players have played years and still weren’t able to receive these types of accolades. I know they worked really hard all summer and dedicated themselves to their craft. I’m really excited to have them return. They were a big part of our championship team and I look forward to seeing them grow.”

“I’m super stoked to be a first team all-region selection,” Pappas said. “I worked hard all season so it’s nice to see it pay off.”

Teaming with Olivia Mikkelson, Pappas claimed the 3A doubles championship.

“I was able to have so much confidence playing on the court with Olivia,” Pappas said. “Her energy was awesome. Playing with her made me up my game a ton and I’m so lucky to have played with such an incredible partner.”

Placing fourth at state in the individual tournament were Fox and Gibbs.