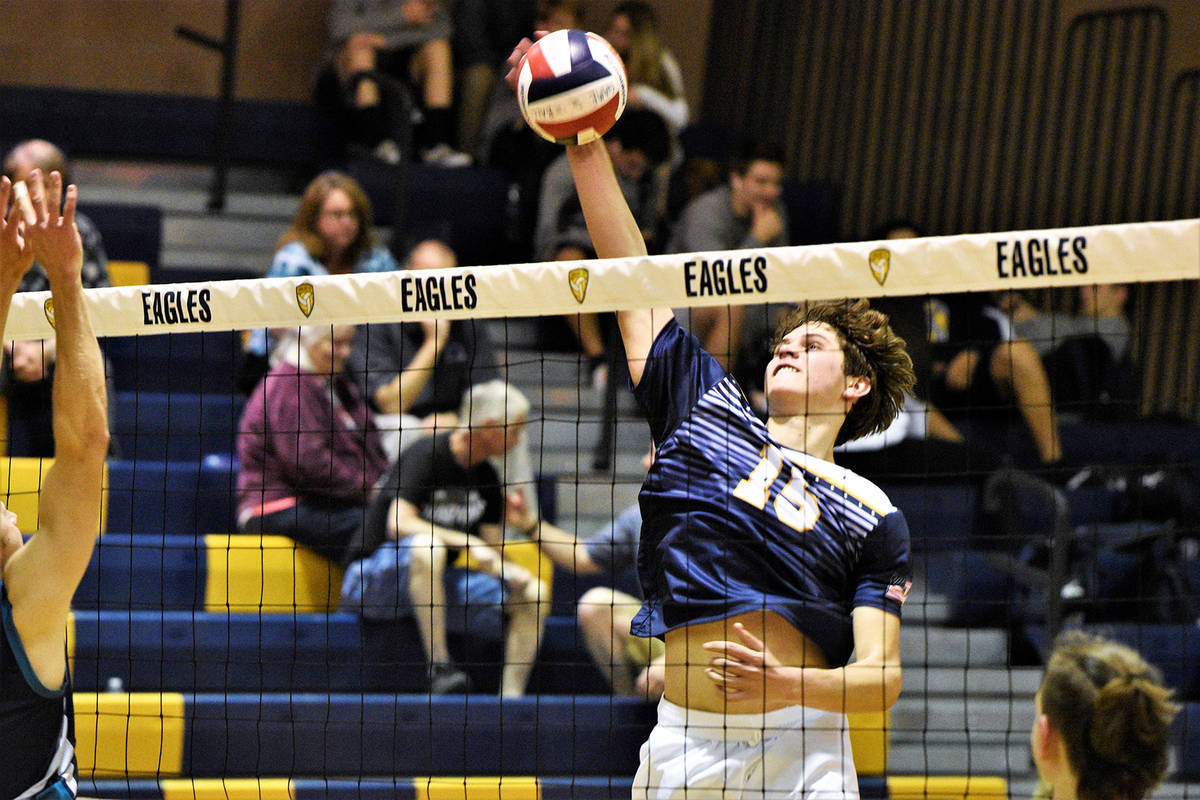 Senior Boen Huxford, seen rising for a kill in April 2019, said he remains hopeful that he and fellow members of Boulder City High School's boys volleyball team can return to competition this year.

Among the latest developments in the COVID-19 pandemic that has canceled sports nationwide is the cancellation of all spring sports state championships by the Nevada Interscholastic Activities Association, which made the announcement April 2.

Now, head coaches at Boulder City High School wonder how long it will be before the season is entirely axed.

“I think this is a really unfortunate situation for the kids, but definitely one that’s necessary,” said baseball head coach Ed McCann. “Obviously, we all want to be back out on the field competing, but this health issue has become serious and our leaders are doing everything they can to keep us safe.”

Breaking the news after Gov. Steve Sisolak announced March 31 a stay-at-home directive until April 30, schools will remain closed until at least May 1, instead of April 16 as originally planned, putting high school athletics further in jeopardy.

“Honestly, at this point, although it’s just speculation, I don’t believe we’ll be going back to school,” McCann said. “Now these things are changing every day so who knows, but my gut just tells me with everything going on that both the school year and season are both unlikely.”

Should the stay-at-home directive end April 30, the NIAA will allow teams to begin practicing May 1, with regional tournaments for all sports starting May 7 or 8 to conclude the season.

“We would more than welcome the opportunity to play again if given the chance,” McCann said. “I honestly believe this is the best Boulder City team in a long time, so obviously I want them to be able to get back out there and show what they can do. If our officials say everything is all good, then we’ll be ready to play for a regional title.”

Echoing McCann’s enthusiasm for a regional championship, senior boys volleyball player Boen Huxford is closely looking over the situation, just hoping for an opportunity to step out on the court one last time.

“It been a pretty big bummer not being able to play,” Huxford said. “We were all really excited for the season and had high hopes of ending our season with a state title.”

Huxford said he is hopeful that he and his teammates, a predominantly senior-laden team, will get closure as they end their prep careers with the Eagles.

“Being able to play again this season would mean so much to my teammates and I,” Huxford said. “We were all seeking redemption due to our loss last year and we believed we were able to redeem ourselves. The regional tournament would give our team closure from all the mess that is happening in the world and would give us seniors a normal end to our high school experiences.”

NIAA member schools in California — Coleville, Needles, North Tahoe, South Tahoe and Truckee — have all closed for the remainder of the school year, canceling all athletic competition.