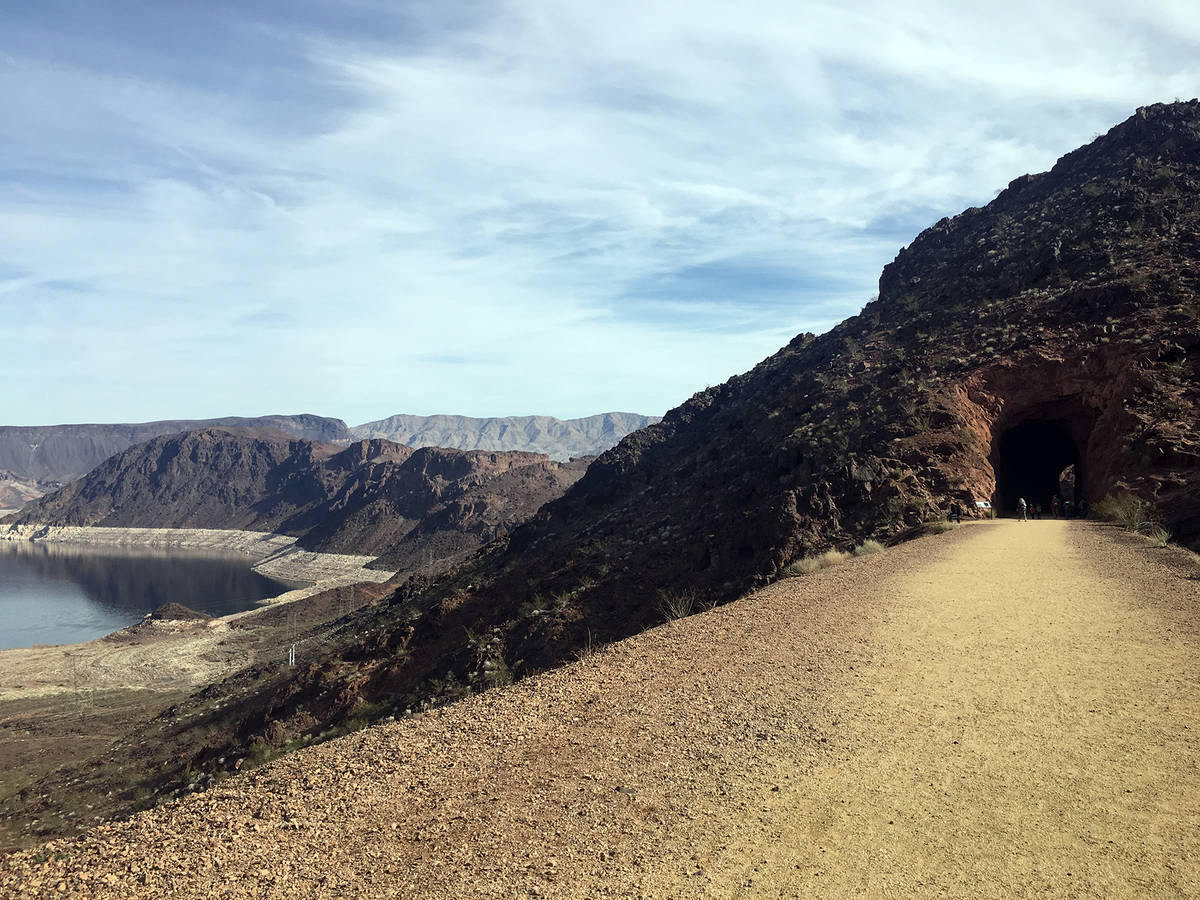 The Historic Railroad Trail at Lake Mead National Recreation Area offers views of Lake Mead as it follows the former railroad route used to transport equipment during the construction of Hoover Dam. The recreation area has seen an influx of visitors and hikers this year as people look for outdoor activities amid the pandemic. 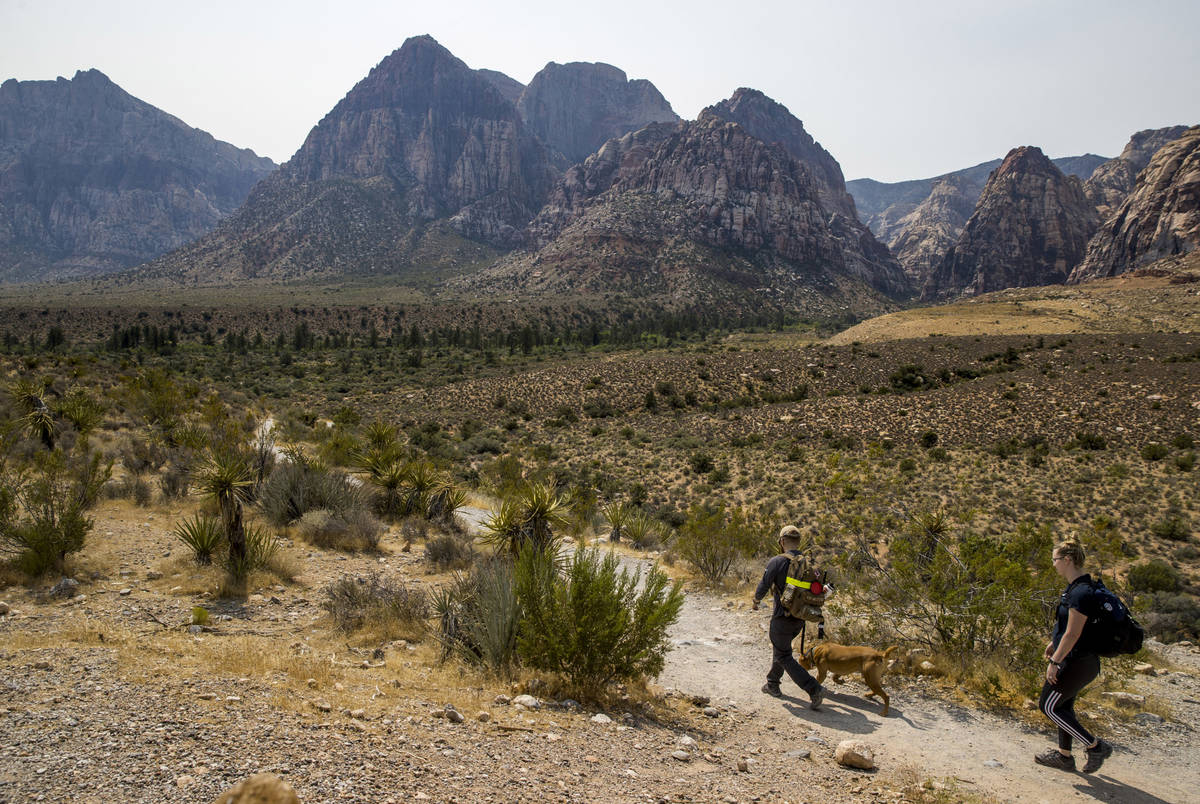 Organizers and officials say that popular trails in the area have drawn heavy traffic and that hiking enthusiasts seem more motivated than ever.

At Red Rock Canyon National Conservation Area, while pass numbers may not reach last year’s sales, officials still expect visitation to be higher than it was last year. Annual visitation to the nearly 200,000-acre conservation area is usually just above 3.5 million, and the number has grown each year.

Data kept by Red Rock officials shows that despite an absence of annual park pass sales in April and May, the park this year had sold more than 9,000 annual passes as of Nov. 2. The months of April and May accounted for 3,741 of the 15,372 passes sold last year.

The number excludes the America the Beautiful pass, which allows access to thousands of parks nationwide, and does not account for visitation outside the Scenic Drive.

“Gyms were closed even, so it made sense to do something. We have so much hiking here, no matter what kind of hiking you like,” said local outdoor enthusiast and author Branch Whitney. “They’re very motivated. We have people climb five days a week.”

Whitney said Red Rock offers much more than what the visitor center advertises, including more than 50 mountain peaks he started exploring in the 1990s. He has since published several hiking guides to help people explore Las Vegas trails, which he says used to barely have paths.

Whitney now runs the 52 Peak Club, a hiking group on MeetUp that gives athletes a playing card for each summit they reach until they’ve filled their deck of playing cards.

The group sponsors about 30 hikes a month, and only 177 people have filled their card deck. When the pandemic forced gyms to close, he received an influx of new hikers ready to earn their cards, Whitney said.

The Bureau of Land Management’s Southern Nevada district office, which oversees Red Rock and Sloan Canyon national conservation areas, continues to monitor the levels of visitation during the pandemic.

“We won’t know the full effect of COVID on visitation until we are out of it and have enough data over enough time,” said John Asselin, spokesman for the district office. “The scenic drive was closed to vehicular traffic near the beginning, but we still had significant visitation to areas outside the scenic drive and still had walk-in and bicycle traffic on the scenic drive.”

Red Rock receives federal funds for conservation, but Asselin said the daily pass, which costs between $5 and $15, is the primary source of income for visitor amenities.

“A lot more people (were) at Mount Charleston because it wasn’t closed down,” he said, recalling the early summer months. “By that time, this COVID thing had already been going on for two or three months and people wanted to get out and exercise.”

The 52 Peak Club meetings have been so full that Whitney said he’s introduced secondary groups that start off 30 minutes after the first hiking group, which usually has 10 to 15 people at a time.

Commercial pilot and Las Vegas resident Shawn Musgrave said he and his girlfriend have been going to Red Rock Canyon at least once a week for years. He said the greatest difference he’s noticed from last year is the parking lots, where he estimates there’s about half as many cars this year as compared with last year.

“People, for whatever reason, don’t have as much to do in Vegas and drive around Red Rock. They’ll get out and take a few selfies, but they don’t go up the hills,” he said. “Last year, it was terrible to get a parking spot, and I didn’t want to leave anything in my car.”

Whitney and Musgrave both believe that Red Rock’s new reservation system has served as a deterrent to the more leisurely visitors, freeing up parking spaces for serious hikers. Musgrave estimated that the peaks have about one-third the crowd they had last year, but he assumes people like Whitney are savoring the quieter trails.

“You do see the outfitters guiding trails. I think they’re loving it. They’re enjoying not having a lot of people,” he said.

For 52 Peak Club hiking leader Cece Ceccarini, the group is about helping others overcome their fears. Ceccarini, who guides elite groups on hours-long, mile-high trails, said that lately she prefers trails near Red Rock and Lake Mead.

“I started hiking in 2014. I was terrified of heights and exposure,” she said. “I have people who I trusted with my life, and the more I hiked, the more confidence I gained.”

Ceccarini recently helped a paramedic climb Kraft Mountain, a 3-mile loop that ascends 4,700 feet. She said she typically limits her groups to 10 people for hiker safety and COVID-19 protocols. She said her weekly tours have been completely full.

The first week of December she organized a climb at Fortification Hill, a 4-mile trail over the Hoover Dam with a 1,400-foot climb. Like others in the valley, Ceccarini said she tends to move her hiking tours in the winter from Red Rock and Mount Charleston to Lake Mead National Recreation Area for better weather and safer trails away from ice.

Lake Mead National Recreation Area reported 17 percent higher revenue this year compared with 2019 and remained the sixth-most-visited national park, according to Lake Mead spokesman Jason Lawor. Some of the more popular beaches, including Boulder Beach and Willow Beach, reached up to four times the normal use, and the park is planning for an even busier spring, he said.

“Park rangers felt that areas were busier than they ever had been before. Some areas would reach capacity at 7:30 in the morning,” Lawor said. “With more Americans recreating outdoors this last year we feel there will be higher visitation this next year.”

The park reopened May 2 to annual pass holders and was met with miles-long lines of cars after being closed for nearly two months. In 2019, Lake Mead reported 7.5 million visitors to the 1.5 million-acre space.