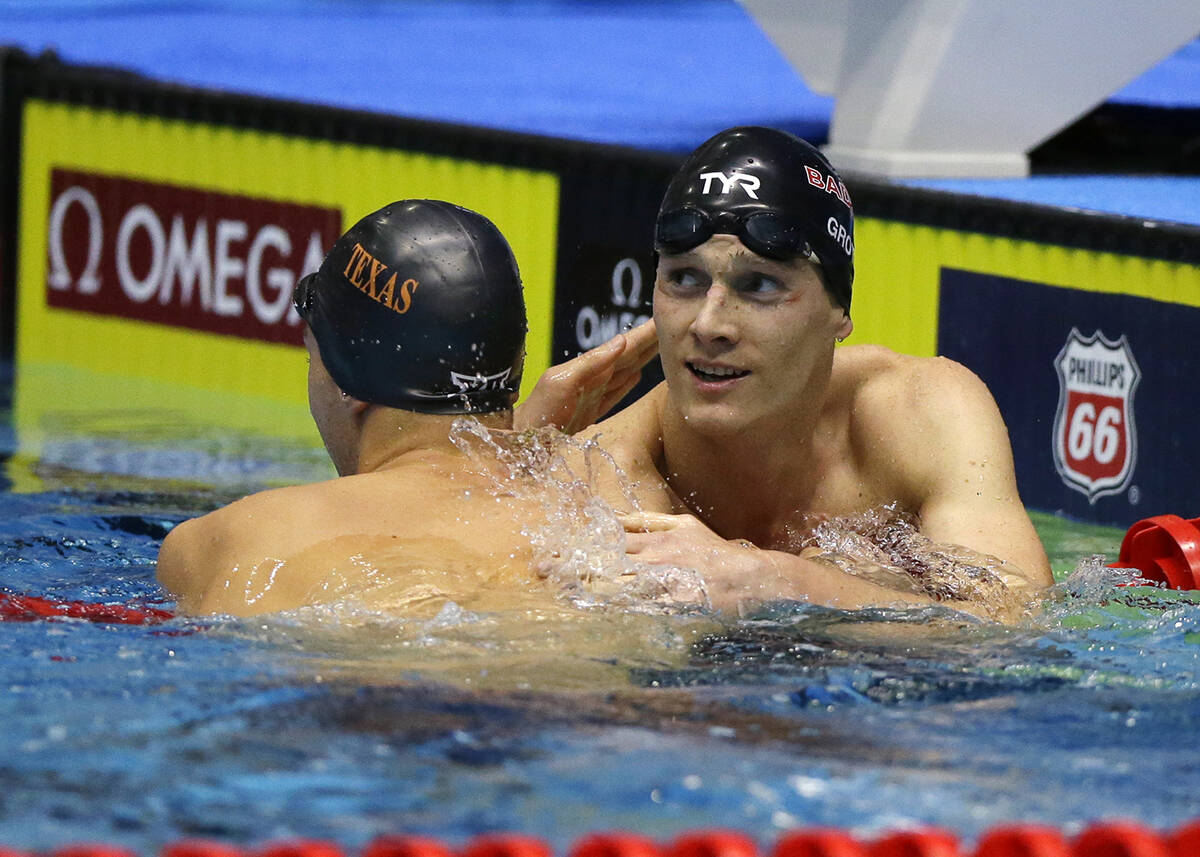 (Michael Conroy/The Associated Press) Zane Grothe, right, seen in June 2017 after winning the men's 400-meter freestyle at the U.S. swimming national championships in Indianapolis, recently was awarded the gold medal as part of the 800-meter relay team at the 2016 World Short Course Championships after the suspension of a Russian swimmer for violating anti-doping regulations.

Winning a gold medal in a competitive sport is something that athletes train for and dream about for years. And for Zane Grothe, a 2010 graduate of Boulder City High School, receiving that championship title is just as impactful today as it was when he swam the race nearly six years ago.

As a result of the suspension of three Russian swimmers for violating the world anti-doping code, Grothe and his three teammates — Blake Pieroni, Jacob Pebley and Pace Clark — were recently awarded the gold medal for the 800-meter relay at the 2016 World Short Course Championships.

“It’s special,” he said about receiving the gold medal. “That silver was the highest recognizable achievement I’d ever received in this sport. And now it’s golden.”

The effects of Artem Lobuzov’s suspension by the Fédération Internationale De Natation, the international organization for administering international water sports competitions, from swimming included the forfeiture of all results after the date of his original suspension in 2014.

Grothe said he believes that FINA took the right action stripping the swimmers of their race results.

“The rules are rules. You agree to abide by them before you race. Performance-enhancing substances have no place in sport,” he said.

Grothe said the win is just as exciting now as it would have been immediately after the race, especially since he still competes at the same level.

“Next week I will be in Greensboro, North Carolina, at the (Phillips 66 International Team Trials) looking to qualify for my fifth world championship team.”

He said he hasn’t been in contact with his teammates from that race to see how they feel about the change, but doesn’t believe it has the same impact as two won gold medals during Olympic competitions and the others retired from the sport years ago “from lack of interest.”