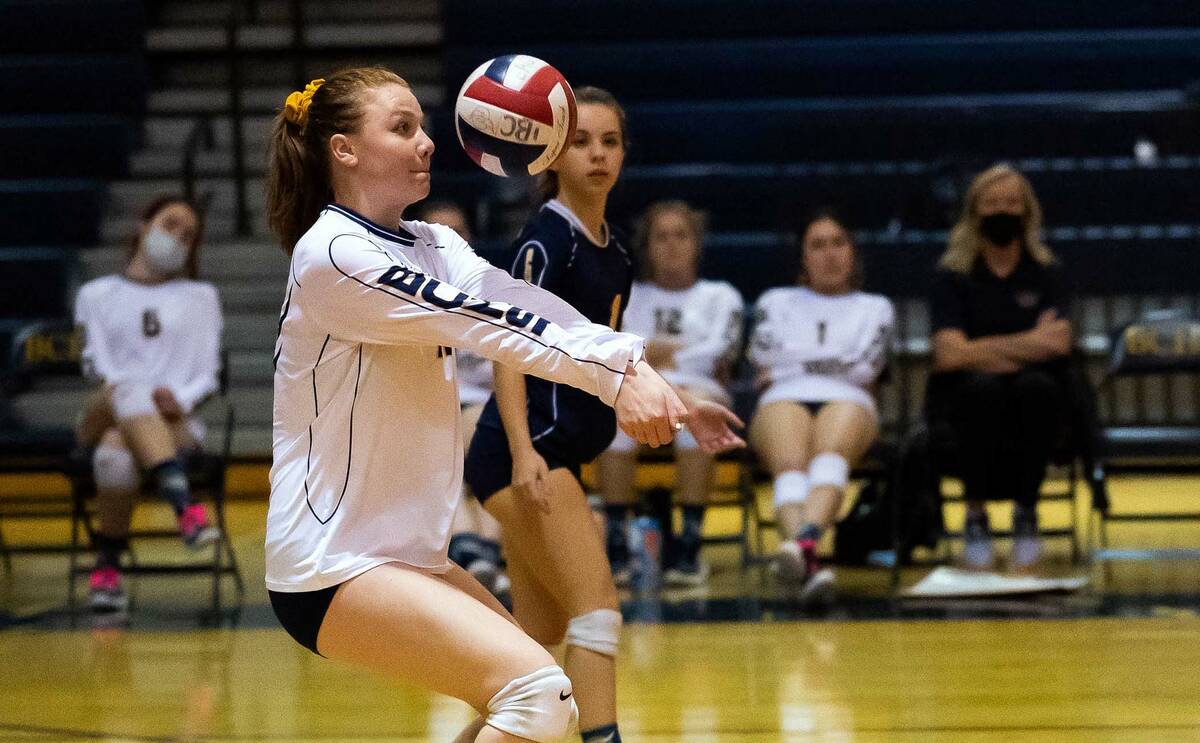 (Boulder City Review file photo) Boulder City High School junior Addison Doane, seen in action last season, is expected to be a key player for the Lady Eagles this year after being named to the All-Southern Nevada honorable mention team, 3A All-State second team, and region and league first teams in 2021.

“I definitely expect us to compete for a state title,” said head coach Chad Robinson. “I expect us to perform as well, if not better than last season. Even though we only have five returners, we’re really deep. Our 13th player is a really strong player. This is one of the deepest teams we’ve ever had.”

Looking to lead the charge, senior Julianna Luebke returns after being named player of the year in the 3A Mountain League last season. A second team All-Southern Nevada selection last season, Luebke generated 354 kills, 192 digs, 89 serving aces and 50 blocks. She was one of three 3A players to make the 12-player second team, an honor usually reserved for 5A and 4A players.

“We’re really lucky to have her,” Robinson said. “She’s very ready to step up and be a leader for us this season. It makes it easier for us going into the season having her back. She’s put in a lot of work in the offseason and looks even more explosive so far this season.”

Also returning is junior Addison Doane, who was named to the All-Southern Nevada honorable mention team last season. Doane was a second-team 3A All-State selection and first-team selection for the region and league after finishing with 262 kills, 89 digs, 42 serving aces and 19 blocks.

Junior Jordyn Woodard returns after being named second-team All-League last season where she finished with 164 digs and 81 serving aces.

Sophomore setter Kira DeLong (245 assists), junior outside hitter Megan Uszynski (77 kills and 34 digs) and senior opposite hitter Karsen Jolley (31 digs and 25 kills) also return for what should be bigger roles with the team this season.

“Both of our outside hitters are power hitters,” Robinson said. “We’ve really upgraded the position coming into the season and they’ll both work great with Kira. We feel like we don’t have to compromise anywhere on this roster. Everyone can be interchangeable.”

Juniors Aspen Christian, Anna Johnson and Kiya Marietta are newcomers to watch this season, he said.

Starting the season with a challenge, the Eagles will host 4A Foothill on Tuesday, Aug. 23.