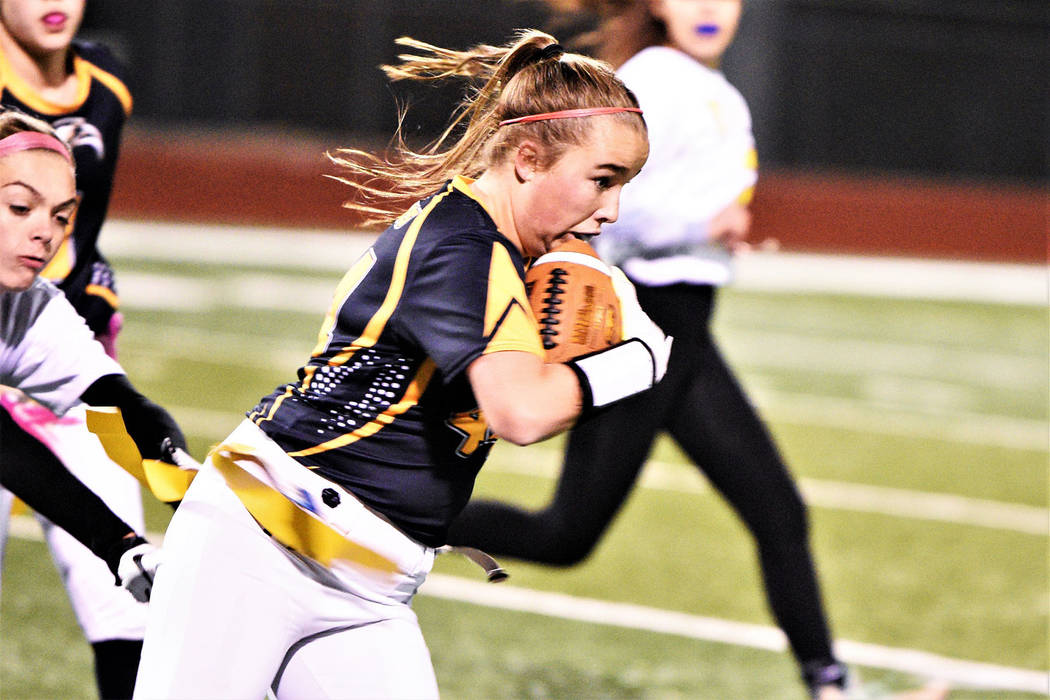 Boulder City High School’s flag football team remains one of the top programs in the 3A classification, even after splitting a pair of games recently.

Falling to rival Virgin Valley 7-6 on Jan. 15, the Lady Eagles rebounded with a win against previously unbeaten Chaparral 26-14 on Friday, Jan. 17.

“The Chaparral game was a big win for us,” head coach Kevin Ruth said. “We beat the only undefeated team in our league. We just need to play hard like that the rest of the year.”

Making their case for the best program in the 3A, the Lady Eagles’ pair of losses have each been by a single point to the Bulldogs and Moapa Valley on Jan. 7. They enter the week with a 8-2 record.

“We’ve lost two games by a total of two points and the girls are frustrated in a good way,” Ruth said. “They know that both those losses could have gone either way. Our offense did a great job against Chaparral and they were a real physical team.”

Moving the ball consistently against the Cowboys, senior quarterback Makaela Perkins finished 14 of 21 for 132 yards and two touchdowns, connecting with seniors Makena Arboreen (eight catches for 51 yards) and Erin Taggard (six catches for 66) on scoring strikes.

Running the ball with authority, senior Emily Rinella rushed for 87 yards and a score on 15 carries. Arboreen added 29 rush yards on eight carries.

Battling down to the wire with the Bulldogs, the Lady Eagles took the scoreless game into overtime with a chance to win, before falling in defeat.

“We had the ball in the red zone and couldn’t put it in,” Ruth said. “It was a big learning experience. We played good defense. We just couldn’t finish drives.”

Perkins completed 18 of 33 passes against the Bulldogs for 145 yards, linking up with Arboreen (seven catches 66 yards) for a score.

On the ground, Rinella rushed for 49 yards on 13 carries.

Heading into their second season meeting with league opponents, the Lady Eagles will host Mojave on Friday, Jan. 24, followed by Valley on Tuesday, Jan. 28. The Lady Eagles beat both opponents in their first encounter.