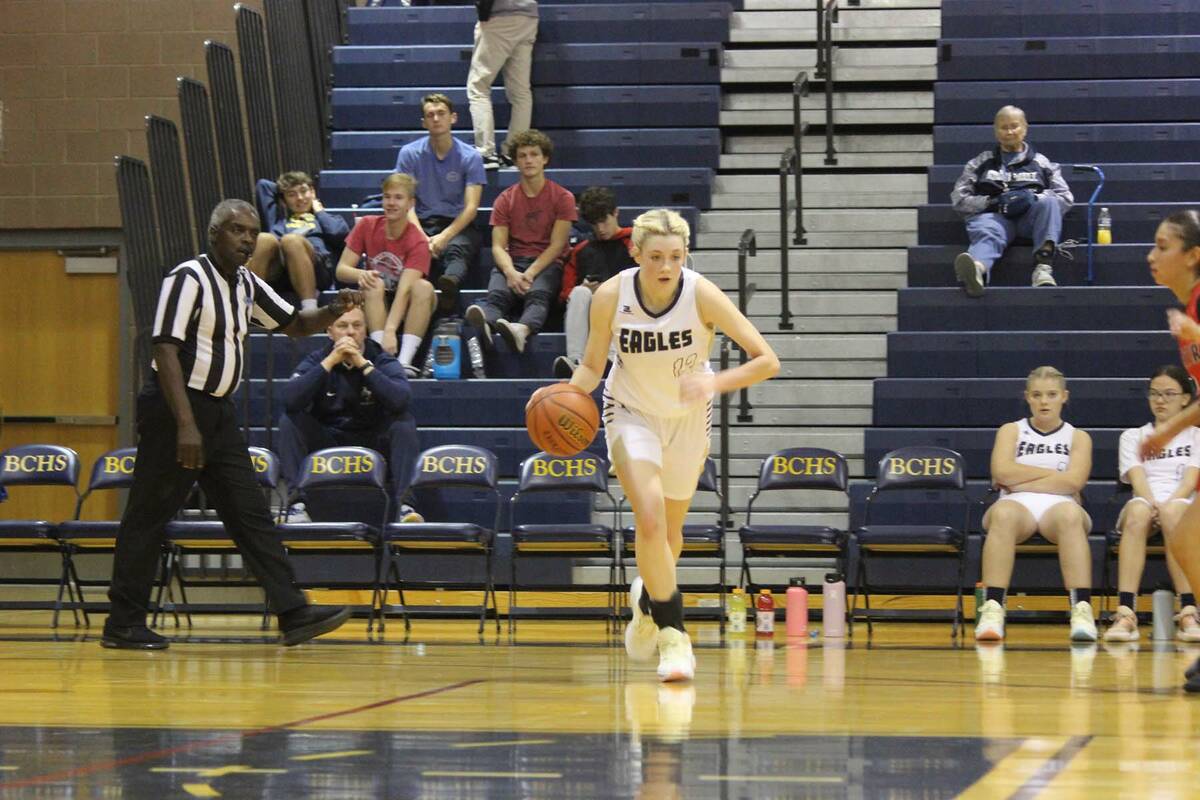 (Courtney Williams/Boulder City Review) Kennedy Barrow, a senior at Boulder City High School, dribbles the ball in preparation to pass it to a teammate in the Lady Eagles’ 59-45 win over Mater Academy East on Friday, Dec. 9.

The Lady Eagles recently found an identity and a recipe for winning ball games. Of their 59 points, 44 were scored in the paint. They also outrebounded Mater Academy East, including a staggering 22 offensive rebounds to create second-chance opportunities.

“We did a great job balancing transition and running our offense,” said girls head coach Brian Bradshaw. “Our movement was exceptional. This is also the second consecutive game we have outrebounded our opponent and I definitely contribute this to being more aggressive and balancing the floor.”

“During the past two games, we have shot an average of 40 percent from the field,” Bradshaw said. “Our shot selection is much better and our shooters are starting to gain more confidence. A strength of this team is our ability to shoot and drive to the basket.”

Playing off of the momentum from their previous victory, the Lady Eagles soared high into their contest with Mater Academy East after defeating Somerset Losee three days prior on a buzzer beater in overtime. Fighting for a 49-47 victory, the Lady Eagles handled the adversity with poise, which coach Bradshaw said he hopes carries into the rest of the season.

Trailing the entire overtime period, Leavitt hit a three-pointer with 14 seconds left, followed by a Torgesen jump shot at the end of regulation.

“I give all of our kids credit because they knew exactly what to do at the end of the game,” Bradshaw said. “I was proud of them not only winning the game but winning the game on the road in a tough environment against a very good basketball team. This team has the mental toughness to compete and it definitely showed tonight.”

The Lady Eagles hope to carry the momentum of three wins in their past four games into the Green Valley holiday tournament, which starts Dec. 27.