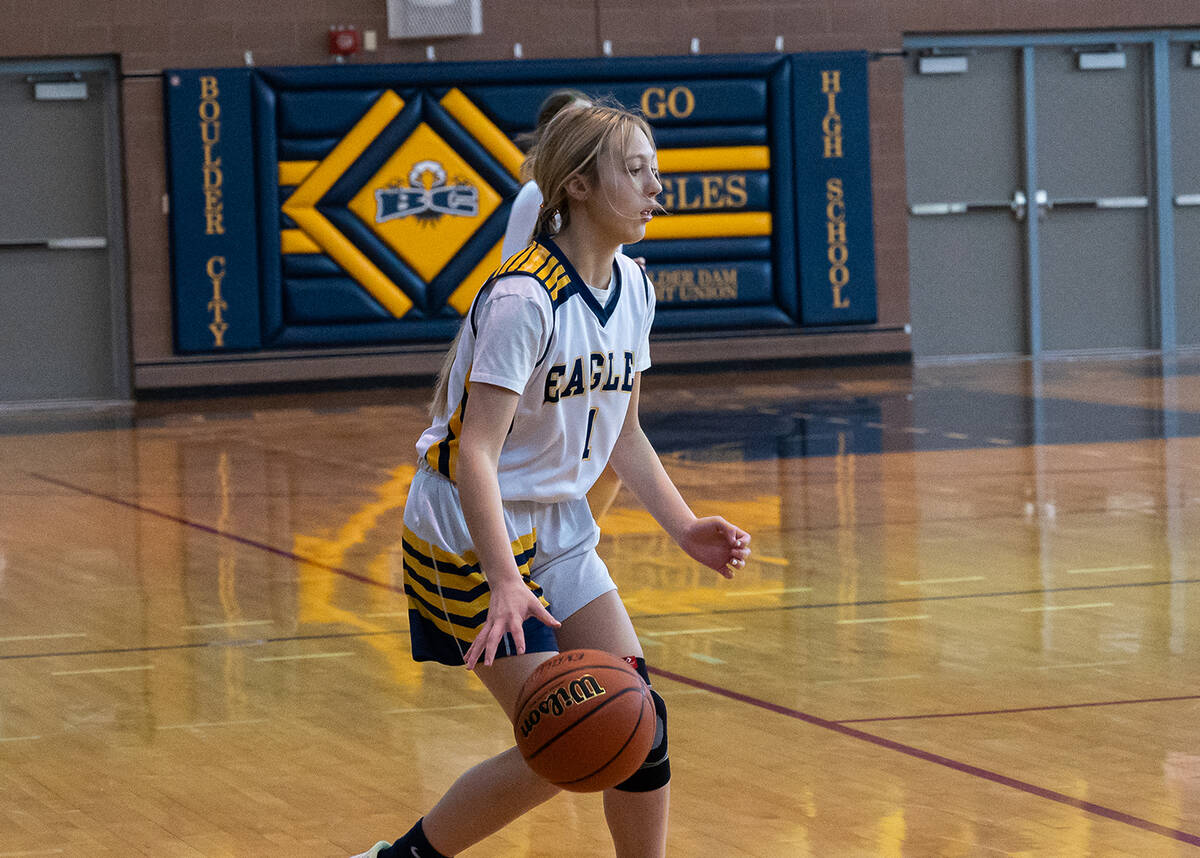 Coming off of a week shutdown due to COVID-19 protocols, the Lady Eagles found themselves in a thriller with Southeast Career Technical Academy on Saturday, Jan. 22, winning a 45-40 shootout in overtime, before routing Eldorado 52-22 on Monday, Jan. 24.

Pulling out a tough victory over Southeast Career Technical Academy, the Lady Eagles were able to withstand a strong second-half surge from the Roadrunners by forcing 35 turnovers on the night.

Leading a strong defensive presence that proved to be the backbone of the victory, junior Acacia Williams led the team with eight steals, while Callie Torgesen added six steals. Senior Samantha Bahde and junior Bree Leavitt each generated four steals.

“The strength of our team continues to be how we guard and the intensity we play with on defense,” said girls head coach Brian Bradshaw. “Late in the game against Tech we made good decisions in our half-court offense and played with confidence. Going into the game, we knew we had to stop their inside threat and leading scorer Morgan Sweet. The girls did a great job executing our game plan.”

Along with being active in the passing lanes, the Lady Eagles’ defense held Tech’s Sweet to 13 points on five of 13 shooting.

The Lady Eagles came out flat against Eldorado before a third-quarter surge propelled them to victory. Ahead 14-13 at halftime, the girls used a 27-5 third-quarter run to put the game out of reach.

“Against Eldorado we came out flat and didn’t play well the first half,” Bradshaw said. “We made some adjustments at halftime in our zone offense and really sped up the game in the third quarter. I loved how we used multiple defenses, forcing several turnovers and quick shots. We have been working a lot on a new zone press and it was very effective against Eldorado.”

Leavitt also had the hot hand on offense, scoring a game-high 24 points, knocking down three 3-pointers.

“We did a great job finding Bree open in our zone offense and she hit some big threes for us,” Bradshaw said. “Our ball movement was exceptional in the second half.”

Heading into the final stretch of the season, the Lady Eagles will travel to SLAM Academy on Friday, Jan. 28, followed by a home game against Pinecrest Academy Cadence on Tuesday, Feb. 1.