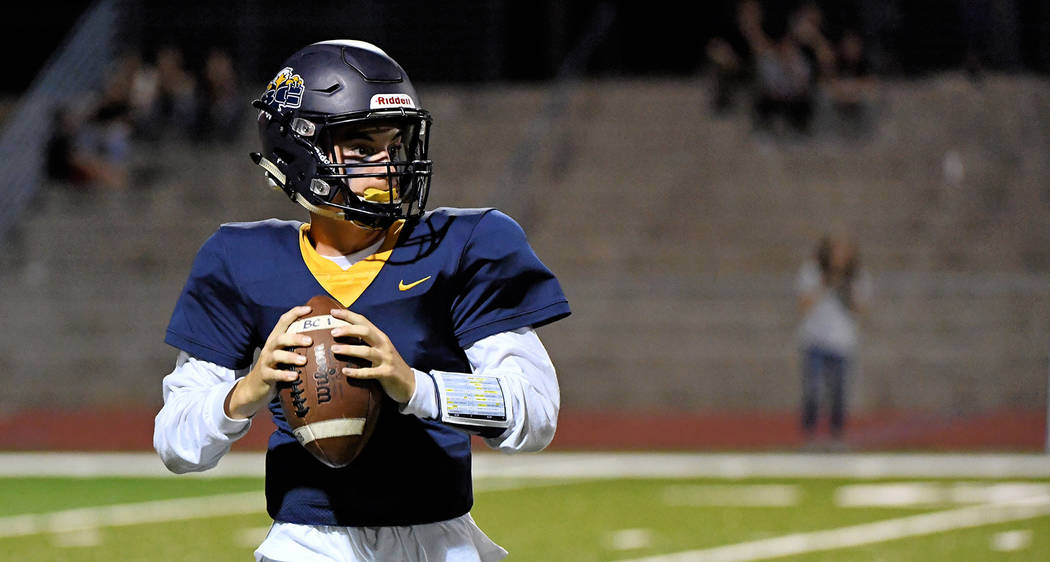 Boulder City High School is taking 50 football players from all levels of competition, including incoming senior quarterback Parker Reynolds, seen last September in a game against Pahrump, to a skills camp in Emmett, Idaho.

Coming off their first winning season since 2012, the Eagles will leave for camp Sunday, July 21, participating with the Emmett High Huskies on Monday through Wednesday.

The Huskies went 1-8 last season, but had winning seasons the previous three years, including an 11-0 record in 2015.

“We’re really excited about this opportunity,” Eagles head coach Chris Morelli said. “Not just the chance to get these boys out of town, but to get them in pads early and start doing drills and give them some different competition. We’re thankful to Emmett for having us and we’re really looking forward to a great trip.”

Understanding the importance and benefits of a summer camp despite the high cost, the Eagles raised $14,000 to cover their travel, hotels and meals by selling discount cards for deals at local restaurants.

“Going to a summer camp is very expensive and we knew we had to raise the money,” Morelli said. “We’re really thankful for all of the community support, buying the discount cards our guys are selling and the local businesses for helping be a part of this and providing great deals to everyone who bought a card.”

The Eagles are bringing 50 players to the full-contact camp, including those from all three competitive levels of play.

“This is going to be great for the younger guys, helping them learn the game, learn how to tackle,” Morelli said. “For the other players, we’re going to scrimmage Wednesday night against Emmett, under the lights with referees and get them ready for our opening game.”

Hoping to get his offense used to its base offensive play calls, Morelli said he sees the camp as an opportunity to get his inexperienced players up to speed.

With seniors on both sides of the ball departed from last season’s playoff squad, the opportunity to run routes and block real competition in a scrimmage setting will be beneficial to the players as well as the coaching staff when determining depth chart placement.

“First and foremost, we need the offense to grasp our base scheme of 10 plays so we can move further,” Morelli said. “That’s our top priority and then after that it’s all about getting kids experience, letting them play against an opposition — helping them grow as players.”

With school starting Aug. 13, player development has come at a cost due to a shorter practice schedule, another key benefit of making the trip to Idaho.

“Having our season moved up a week, we couldn’t have planned this camp any better,” Morelli said. “By starting school early, we lose (five) two-a-days, so that’s 10 practices that need to be made up and having this camp is really helping with that. We have a big matchup against 4A Cimarron-Memorial to open the season and this will hopefully get us ready.”

The Eagles will open their season at home Aug. 23.