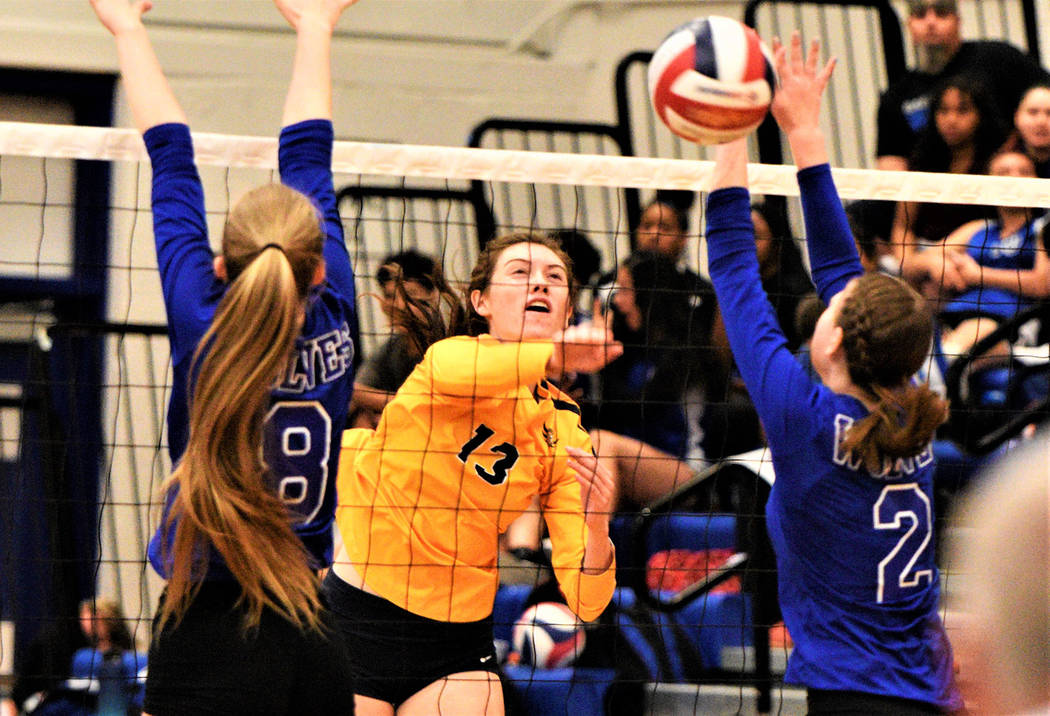 Boulder City High School girls volleyball team has remained focused on the task at hand, one game at a time, even as it dominated league play throughout the season.

Entering this week of play with a state-best 32-5 record, the Lady Eagles have been perfect as of late, rattling off 16 consecutive shutout victories, including a pair of 3-0 wins against rival Virgin Valley on Friday, Oct. 11, and Sunrise Mountain on Tuesday, Oct. 15.

Skill and confidence aside, determination remains the Lady Eagles’ key ingredient to victory, according to their coach.

“The girls know that they’re a very talented team,” head coach Kurt Bailey said. “As the sport of volleyball has evolved with the club scene over the years, our girls have, too, and that’s played a key role in our success. With how deep we are, we’d like to think that the best competition that we play is against ourselves in practice. It’s there that we see how special this group really is.

“We’ve had a lot of success this season, but the girls are hungry and determined not to slip up,” he said. “They all hold each other accountable for playing at their best, not only in games, but in practice. We have girls diving for loose ball in drills. They’re competitive and strive to be great. Winning a bunch of games has been nice for us, but this group has goals both as a team and individually that still need to be accomplished and that’s what’s driving us.”

While beating Sunrise Mountain and Virgin Valley might provide excitement for the Lady Eagles, this group has bigger goals that fuel them on a nightly basis: repeating as 3A Sunrise League champions and then successfully defending their two consecutive 3A state championships. En route to both of those goals, the team has surpassed last season’s win total of 38 victories.

“Every match is important to us because we set a goal to be undefeated in league play this year,” Kamry Bailey said. “We’re motivated to beat our win record; it’s actually one of our biggest team goals for this year. Forty sounds pretty good. We keep our focus by setting team goals rather than just focusing on winning.”

Focused and determined to reach the heights of success they’ve put in front of them, very few have been able to knock the Lady Eagles off their mountain top this season.

Collecting 32 wins this season, 11 have been against Nevada 4A opponents and four have come against out-of-state opponents. In 3A play, Boulder City has won 18 consecutive matches, with its last loss Oct. 23, 2018.

With a target on their back every time they step out onto the court, the Lady Eagles come ready to answer all challengers.

“We take every game seriously and play to our best abilities no matter what the competition looks like,” Wright said. “We knew from the start of the season that we would have a target on our backs because of our previous record. As long as we play our game and don’t underestimate our competition, I’m confident in our team and our skills no matter how much pressure is on us.”