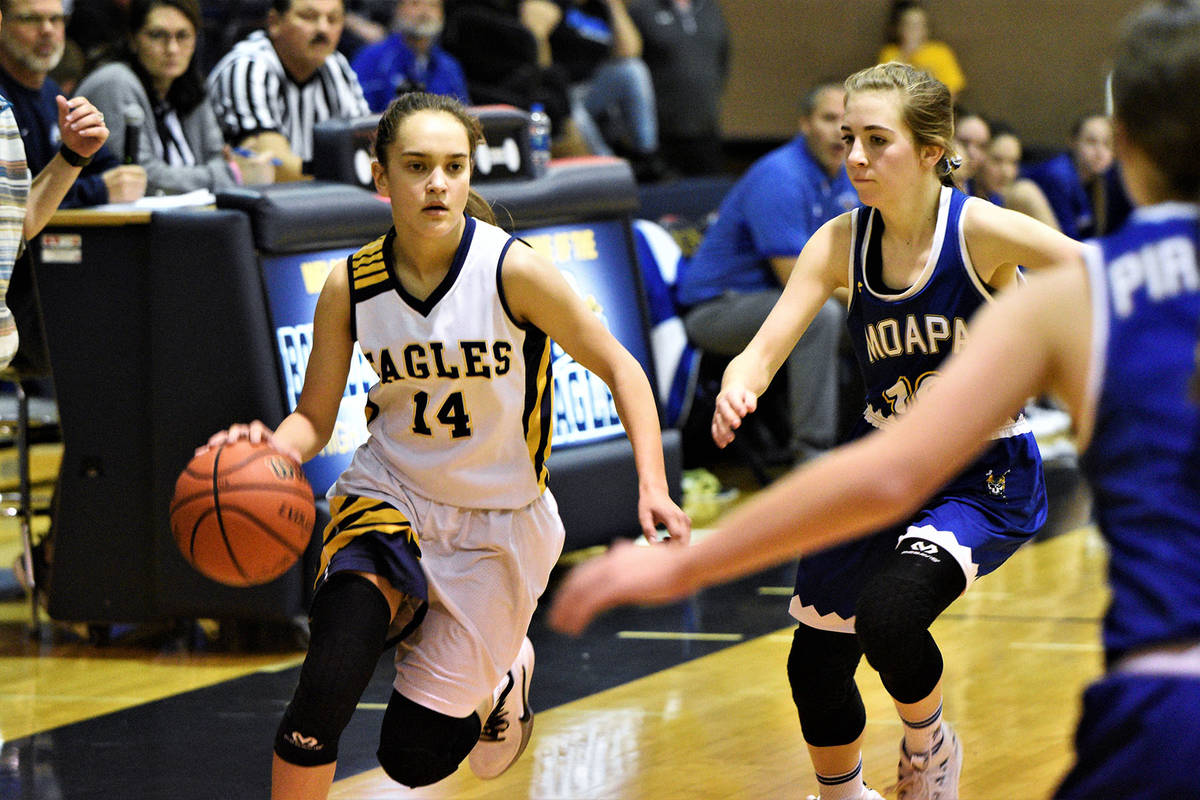 Boulder City High School senior guard Keely Alexander, seen in action Jan. 14, was named to the 3A all-state first-team for helping guide the Lady Eagles to a 17-9 record this past season.

Senior guard Keely Alexander, who had a breakout season for Boulder City High School girls basketball team, was named to the 3A all-state first-team for her efforts in guiding the Lady Eagles to a 17-9 record.

“Keely is a once-in-a-lifetime player,” head coach Lisa Foster said. “She deserves all the awards out there because she’s such a rare athlete. She operates for intrinsic value so the awards aren’t why she does what she does. She’s so successful because she’s so passionate and committed.”

Emerging as a true playmaker for the Lady Eagles this season, Alexander led the team with 14.5 points per game, along with four rebounds, 2.5 steals and two assists.

Making the second-team All-Sunrise League team was senior forward Ellie Howard, who was an absolute monster in the paint for the Lady Eagles. Averaging 14 points per game, Howard led Boulder City with 10 rebounds and two blocks per game.

“Ellie is a great kid,” Foster said. “She was such a leader and presence on the court. She motivated her team. She’ll be greatly missed.”

Morris, a key defender for the Lady Eagles, averaged 2 points, four rebounds and a steal this past season, providing the team with much-needed senior leadership alongside Alexander and Howard.

“Every day in the gym was memorable,” Foster said. “Ellie, Keely and Sophia all did their part to set an example of Boulder City basketball. It was such a pleasure to coach these three kids. It was a great first season to start for me.”

Coming back for a second season, Foster will have two honorable mention selections to build her team around: Williams, who averages 6 points, four rebounds, three steals and two assists per game, and Bahde, who averages 2 points, three rebounds, 1.5 steals and one assist per game.

“I expect big things with the group returning,” Foster said. “Calli and Sami have big shoes to fill but they’re up for it and I think they’ll be great leaders.”