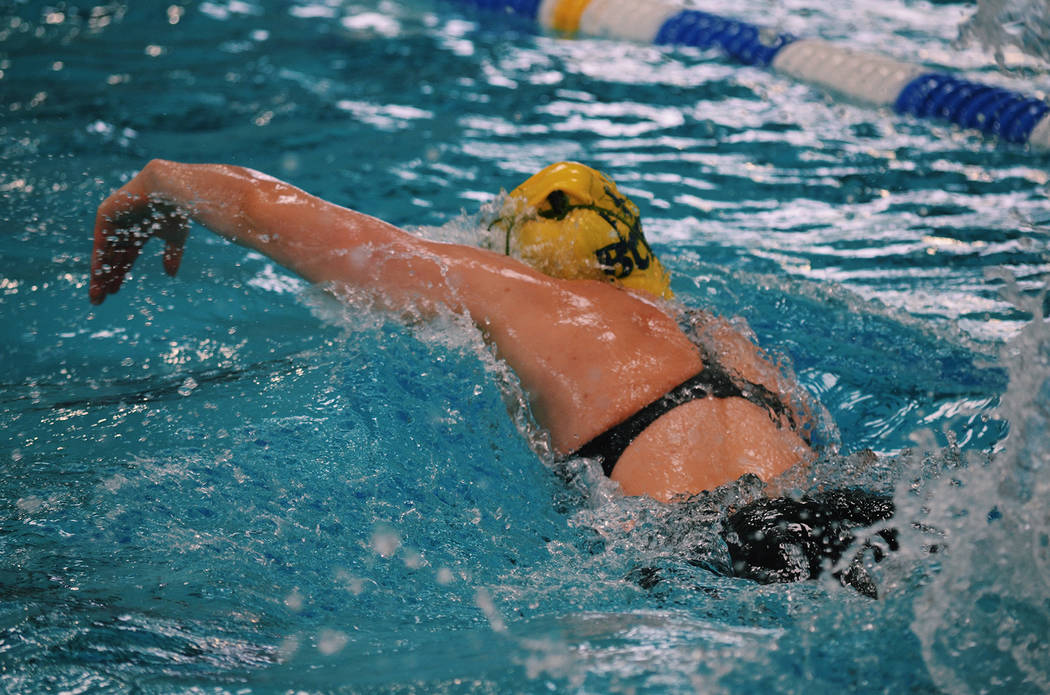 (Amy Wagner) Boulder City High School senior Aimee Garcia, who was the Class 3A state champion in the 200- and 500-meter freestyles, was named to the all-state first team.

Setting the tone for excellence athletically this spring, eight Boulder City High School athletes were named to the Nevada all-state teams in their respective sports, which highlight the top players in each sport regardless of classification.

Aimee Garcia and Rose Pouch, who helped the Lady Eagles claim their seventh consecutive state championship in girls swimming, were named to the Nevada all-state first team for their efforts.

Pairing together to form a lethal combination in the water, Garcia placed first in the 200-meter and the 500-meter freestyles while helping win the 200 medley and 400 freestyle relays at state. Also a part of both winning relay teams, Pouch individually won the 200 individual medley and the 100 butterfly events.

For boys swimming, A.J. Pouch helped the Eagles finish as 3A state champion runner-ups, placing first in the 200 individual medley and 100 breaststroke, while helping the 200 and 400 freestyle relay teams place first at state.

“I am extremely honored to be a part of the all-state team,” A.J. Pouch said. “I feel like everyone who has been named has definitely worked hard to be on the all-state team and I’m happy I could end my high school career with a bang.”

While A.J. Pouch is ending his career in the pool with the Eagles, sophomore Joseph Purdy is just getting started after being named to the second team. He is rising star for the Eagles and will take the reins next season after winning the 200 freestyle and the 500 freestyle at state.

A rising star in boys golf, sophomore Blake Schaper was also a second team selection, finishing as the 3A individual champion runner-up with an even-par score of 144 over the two-day event on the par-72 course. Throughout the regular season, Schaper won five Sunrise league matches.

Rounding out the honorees, senior Karson Bailey and juniors Preston Jorgensen and Boen Huxford were tabbed as honorable mention selections in boys volleyball.

All-state participants from BCHS in baseball and softball will be announced next week if nominated. All-state teams for softball, selected after deadline Wednesday, June 12, and baseball, to be selected today, June 13, can be found on http://Nevadapreps.com.