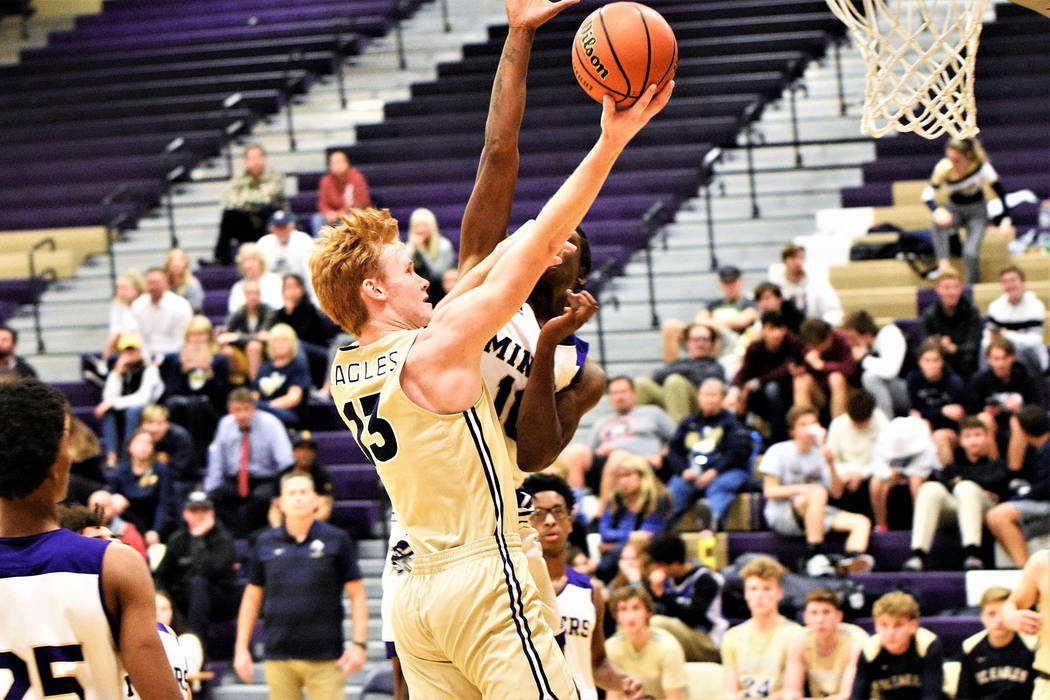 (Robert Vendettoli/Boulder City Review) Boulder City High School junior forward Matt Morton, seen going up for a layup against Sunrise Mountain on Jan. 27, was a key player on offense and defense in the Eagles’ 57-39 victory over Chaparral on Jan. 30.

Boulder City High School’s boys basketball team earned a huge 57-39 victory over rival Chaparral on Jan. 30, rebounding from its only league loss of the season. They were defeated by the Cowboys 65-59 on Jan. 8.

“The team played very well; we corrected our mistakes,” said junior Ethan Speaker. “We did what we needed to do to come out with the win.”

With the win, the Eagles advanced to 15-9 and 8-1 in 3A Sunrise League play on the season, taking control of first place.

“This one was huge for our program,” head coach John Balistere said. “Last week, there were three teams in our league with one loss battling for first place, and now we’re in sole possession. One of our goals this season was to control our own destiny and right now we’re able to do that.”

Trailing 9-6 after the first quarter, the Eagles started slow before finding a rhythm and routing the Cowboys.

“I think that as a team we played very aggressive and played like ourselves,” said junior Matt Morton. “When we dominate the inside and rebound like we did, we are a hard force to stop.”

Controlling the glass throughout the night, the Eagles grabbed 48 rebounds, highlighted by 16 from Speaker and 14 from Morton. Speaker grabbed seven offensive rebounds and Morton grabbed five, giving the Eagles plenty of second-chance opportunities for baskets.

Currently on a six-game win streak that started with a victory over rival Moapa Valley on Jan. 14, the Eagles will travel to the Pirates on Friday, Feb. 7, followed by a home game against rival Virgin Valley on Tuesday, Feb. 11.

The Eagles will be ready to play, with hopes of securing the top seed in the playoffs.

“I am 100% confident that the boys will be ready,” John Balistere said. “Heading up to Moapa we know it’s going to be a really physical game, but we’re prepared for that. We control our own destiny right now and we would love to repeat as league champions.”